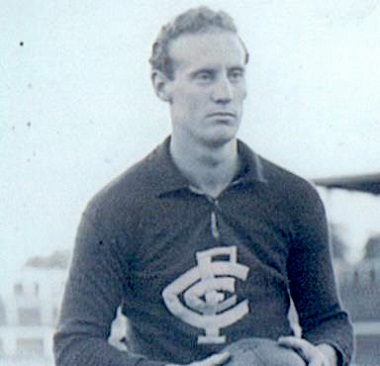 The nephew of former Blue Jack Way, Alex Way was a promising young centre half-forward from Coburg Rangers when he was recruited by the Blues in 1944. At the culmination of his second season, he had managed sixteen senior matches (mainly as a half-forward flanker) before he was a surprise inclusion in Carlton’s fabled 1945 Premiership team.

Way got his chance at Grand Final glory when his volatile team-mate Fred Fitzgibbon was suspended for striking during the Blues’ great win over Collingwood in the mayhem of the previous week’s Preliminary Final. Although Alex hadn’t played in the senior team for a month at that time, he and Charlie McInnes were chosen to replace Ron Hines and Fitzgibbon for the decider. Jim Mooring (who had warmed the bench against Collingwood) joined the starting line-up as second rover, Way went to a half-forward flank, and McInnes took Mooring’s place as 19th man.

Because the MCG was unavailable (it was being used as a transit centre for American troops) an enormous crowd of almost 63,000 crammed into Princes Park on the Saturday afternoon of September 29, 1945, and witnessed one of the most infamous games of football ever played. Promoted as the ‘Victory’ Grand Final to celebrate the end of World War II, it degenerated into a rolling brawl after quarter time, as players on both sides went at each other with fists, elbows, knees and boots.

Sadly, the overt violence of that day has since overshadowed Carlton’s monumental achievement. Ninth on the ladder after seven rounds of the season, the Blues won thirteen of their last fourteen matches – including two of the toughest finals ever played – and beat the hot favourites South Melbourne by 28 points in the decider. No team before or since has faced a harder path to the Premiership.

A few minutes before half time on that remarkable afternoon, men from both teams were already dazed and bloodied. The Swans were kicking with a strong breeze and clinging to a narrow lead when South’s full-back Jim Cleary took an uncontested mark in his own goal square. Looking up, Cleary saw two team-mates out in space on the northern side of the ground, and kicked long toward them.

But just as the ball arrived, Way threw himself between the pair to take a juggled mark. He played on, and speared a neat foot pass to ruckman Ron Savage, who immediately handballed over to Mick Price, and the Carlton rover’s goal put the Blues in front at a pivotal moment in the game. Although South managed another major themselves before the main break, their lead was only two points by then - and Carlton’s spirits lifted. The Blues had held the Swans in check with the breeze, and it was our turn next.

That passage of play, and others like it leading up to Carlton’s triumph, marked the pinnacle of Alex Way’s career. He enjoyed another reasonably successful season in 1946, playing 12 games for 6 goals, but thereafter became a regular with the Reserves.

His last appearance for Carlton came in round 10, 1948, when he pulled on his number 4 guernsey and ran out onto the Lake Oval to play South Melbourne one last time. The Blueboys certainly sent Alex off in style - Ray Garby and Fred Davies both kicked 5 goals - as the Blues knocked over the Swans by 41 points.

After departing Princes Park, Way crossed Bass Strait and spent the remainder of his playing career with the City and Longford clubs in the original Northern Tasmanian Football Association. In 1963 he returned to Victoria, and remained devoted to the Navy Blues until his death at the age of 89 in November 2014.