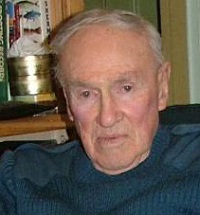 
In a short stay at Princes Park at the height of World War II, Andrew McDonald ‘Mac’ Wilson played nine matches for Carlton – seven of them as 19th man. Remarkably, his first and last appearances came in games that were 100-point thrashings for Collingwood and Geelong respectively, and his first full game was a final.

Wilson was 29 years old and a seasoned campaigner for Sunshine in the Footscray District League when he found his way to the Carlton Football Club in 1943. With so many young men continuing to volunteer for military service in the midst of World War II, all VFL teams were short of players and welcoming anyone with football ability.

Wilson was named to make his debut as 19th man for Carlton’s much-anticipated clash against Collingwood at Victoria Park in round 12, 1943. Winning at the Magpies’ home ground had been one of football’s toughest assignments for decades, but it was a task eagerly anticipated by the Blues. On that bright Saturday afternoon, in front of the usual fanatical crowd, Percy Bentley’s Blueboys handed out a football lesson to their fiercest rival. Key forwards Jack Wrout and Jim Francis shredded the Magpie defence with 15 goals between them. Rover Mick Price added five, and half-forward Charlie McInnes chipped in with another four, as Carlton slaughtered an inept Collingwood by 104 points to give Wilson the perfect introduction to VFL football.

Max warmed the bench another three times during Carlton’s last four games of the season, which culminated in a 15-point defeat by Fitzroy at the Brunswick St. Oval in round 16. The Blues still qualified for the finals on percentage however, and aimed up for another shot at the Maroons in the first Semi Final. On the Thursday evening prior to that match, Wilson was chosen for his first full game at half-back for the Blues, replacing the injured Frank Anderson.

Despite the deprivations of wartime life in Melbourne, nearly 40,000 spectators crammed into the MCG on that weekend. They were treated to a typically rugged clash that was decided in the third quarter, when the Maroons pulled away to win by 51 points and end Carlton’s finals hopes at the first hurdle.

After that, it was into uniform and back to the pine for Mac in 1944. In February he enlisted in the RAAF, where basic training kept him off the football field until late June. But as soon as he could, he made himself available and was selected as 19th man for another meeting with Collingwood in round 8, this time at Princes Park. Carlton triumphed again over the Magpies - by five goals - in an even team effort.

Two more Saturday afternoons wrapped in a dressing gown and pacing the boundary followed, before Mac was called into the Blues’ starting line-up for the second and last time when Carlton met Geelong at Princes Park in round 17, 1944. Another serving member of the RAAF played his first game for in navy blue that day – the brilliant West Australian-born, future Premiership captain of Carlton, Ern Henfry - who was near-best on the ground while the Blues smashed the Cats by 106 points in a seamless exhibition of team football. Alex Way kicked 5 goals, Mick Price and Charlie McInnes four each.

Wilson was either unavailable or omitted for a controversial last game of the season against Footscray the following week, when a hotly-disputed goal after the final bell gave the Bulldogs victory by a point – a result that tipped Carlton out of finals contention. Mac didn’t go on after that, and his career at Carlton ended at the age of 30.

On Wednesday, July 9, 2014, Mac Wilson reached the grand age of 100. At that time he remained the oldest former living player at both Carlton and the AFL. He died on Wednesday August 9, 2017 when aged 103 years and 32 days old. At his death he was the second oldest ever League player behind Newton Chandler who was 153 days older when he died in 1997. For 10 days Carlton had two former players that were aged 100 with the other being Keith Rae who turned 100 on July 30, 2017..