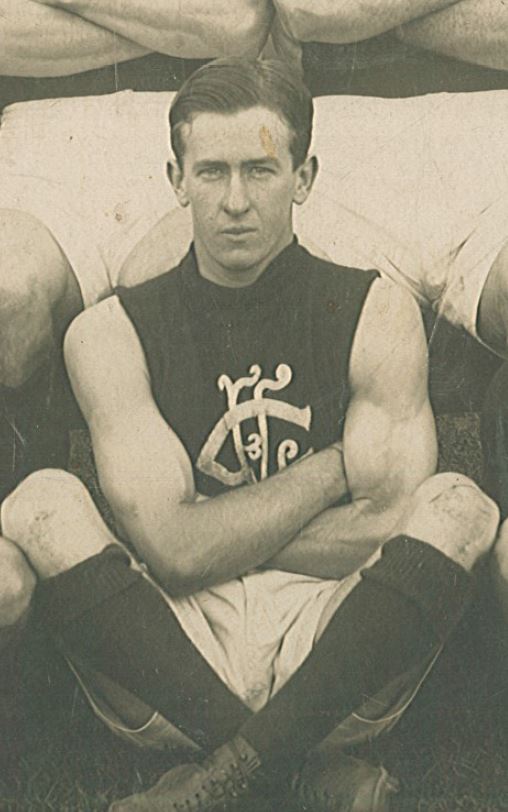 Although he was just 170 centimetres tall, Athol Sharp was a spectacular mark for his size, a skilful ball-gatherer and a reliable place-kick for goal. After missing a place in Carlton’s 1914 flag side through injury, he bounced back to share the roving duties in the Blues’ 1915 Premiership team. His playing career at Carlton spanned eight seasons, interrupted for three years while he served his country in World War 1.

George William Athol Sharp was born at Newmarket in the inner-western suburbs of Melbourne in the last decade of the 19th century. He grew into a typical Melbourne teenager; one whose life revolved around school and family, cricket in the summer, and football in the winter. When he finished his compulsory education in his mid-teens, he began an apprenticeship as a baker.

Aged 18, he was playing football for Moonee Ponds. It is more likely however, that it was his cricketing association that led Athol to Carlton Football Club in 1913. As the threat of war in Europe loomed over the British Empire, he was called into the Blues’ senior team for the first time in Round 14 of that year, when Carlton met University at Princes Park. Wearing guernsey number 20, and playing at full-forward, he kicked one of the Blues’ nine goals as Carlton thrashed the Students by 50 points.

In his two other games in his debut season, Sharp played as second rover to Viv Valentine – Carlton’s prized recruit from Tasmania, who was rapidly establishing himself as one of the best on-ballers in the business. Although the Blues trailed off late in the season to miss the finals, the potential of Valentine and Sharp in tandem was plain to see. They played another dozen games together in 1914, only for both to suffer injuries late in the season. Testifying to the quality and depth of talent at Princes Park at that time was the fact that even without the club’s first and second choice rovers, Carlton was still able to beat South Melbourne for the Premiership.

Meanwhile, war had been declared in the first week of August, 1914, and all over the Commonwealth, young men volunteered to fight for King and country. Many of them - like Athol Sharp - had to bide their time and wait until they had completed all the terms of their apprenticeship before they were free to enlist. Athol was among the many thousands who joined militia (Army Reserve) units to prepare them for active service at the appropriate time.

In 1915, Sharp switched to guernsey number 14 and resumed his working partnership with Valentine around the packs for Carlton. The dash and accuracy of Vin Gardiner at full-forward, combined with Sharp’s ability to outmark taller opponents while resting in the pocket, added to a dangerous Blues attack.

Collingwood and Carlton were the form teams of 1915, and deservedly met in a Grand Final described by former Carlton coach Jack Worrall as ‘a glorious contest – one of the grandest that has ever been seen in the finals.’ Momentum swung both ways for three quarters, before Carlton kicked five goals in the last ten minutes to win by 33 points. Sharp and Valentine roved to a Blues’ ruck held in check for most of the match, but eventually broke the shackles and helped set up Carlton’s fifth flag victory in just 20 years of VFL competition.

Wartime deprivations reduced the VFL to only four teams in 1916, and Carlton were right in the contest for another flag until the last Saturday in August, when they met Fitzroy in the Preliminary Final. The Blues took to the field wearing black armbands, in tribute to 1915 Premiership wingman George Challis, who had been killed in action in France. However, by half-time the Blues had lost Athol Sharp and full-back Ernie Jamieson to injury, and Fitzroy ended our year with a five-goal defeat.

While still recovering from the broken collarbone he suffered against Fitzroy, Sharp put his football career on hold to enlist for active service in October 1916. Aged 20, having completed his apprenticeship and with two years part-time training to his credit, Athol’s transition to life as a serving soldier was a smooth one. He was assigned to the artillery, and sailed for France in May, 1917.

Throughout the remainder of the war, the heavy guns of Sharp’s 14th Field Artillery Brigade provided invaluable support to the Australian infantry, in campaigns that finally turned the tide in favour of the Allied cause. When the Armistice was signed on November 11, 1918, five years of the bloodiest conflict in human history was ended at last.

Athol returned to Australia in July, 1919 to be discharged from the services by a grateful nation some months later. Soon, he was back at Princes Park, playing cricket over the marvellous, peaceful summer of 1919, and saddling up to play football again for the Blues in 1920.

This time around, Athol chose, or was assigned guernsey number 20, when he ran out onto a packed Punt Road oval in his return to senior football against Richmond in May, 1920. His former on-field partner Viv Valentine had retired the previous year, so Sharp shared his on-ball role with a feisty young Lyle Downs. Richmond proved too good on that occasion, but the Blues were thrilled by the debut performance of their new key forward Horrie Clover.

Sharp added another seven games and five goals to his record before - for reasons not made clear - he ended his playing career for Carlton at Brunswick St oval on July 17, 1920, when Fitzroy beat the Blues by 13 points.

Throughout the remainder of a long sporting life, Athol was a keen supporter of the Old Dark Navy Blues, and a stalwart of the Carlton Cricket Club. During the nineteen-sixties, under the Presidency of another former Blue in Frank Triplett, Athol was a familiar figure as a doorman at Carlton Cricket Club – a task he happily carried out until he passed away in April, 1969.