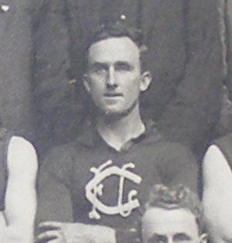 One of the finest full-backs of his era, Ernie Jamieson won two flags from four Grand Final appearances for Carlton, during an interrupted playing career spanning 13 seasons. At first a pacey, long-striding wingman, he was shifted into defence in his third year with the Blues, and became a star who wore six different guernsey numbers in his time at Princes Park.

Jamieson was actually born in Carlton in June 1888, but was starring for Williamstown in the VFA when the Blues recruited him in 1909. He made his senior debut on a wing (alongside Rod McGregor and Ted Kennedy) against St Kilda at Princes Park in late August of that year. Just over twelve months later, he was part of the team beaten by Collingwood in the 1910 Grand Final.

Midway through the 1911 season, Blues’ captain-coach Fred ‘Pompey’ Elliott sent Jamieson to a half-back flank, where his pace and anticipation was a revelation. Later, in round 16 against Geelong at Princes Park, injuries forced Elliott to try Jamieson at full-back, and a new star for Carlton emerged. From then on, and throughout the next five seasons, Ernie anchored the last line of defence for the Blues.

Not the tallest or strongest of key defenders, Jamieson brought finesse to a position previously dominated by brawn. His pace, anticipation and uncanny ability to read the flight of the ball were his assets. Rather than engaging in arm-locking, goal-front wrestles with his opponent, he relied on his speed off the mark to beat his man to the ball, or his good spring to leap over the pack and punch the ball away. Few full-forwards could match him once the ball hit the ground, and he was a glorious long drop kick out from the goal square.

In 1911, Carlton lost to Essendon in one Semi-Final, and Jamieson became the first Blue to wear our guernsey number 6. In 1912, he switched to number 10, but it didn’t bring him luck. Injury restricted him to only 8 matches for the year, and he couldn’t be considered for our ultimately unsuccessful finals campaign.

Season 1913 brought Ernie representative honours for the first time when he was chosen in the Victorian state squad. Earlier, he had switched guernsey numbers again (to 15) and enjoyed a consistent season. He didn’t miss a match for the Blues in an unlucky year for the club. Illness and injury to key players at the wrong time saw Carlton tumble down the ladder to sixth.

In August 1914, the First World War began when Australia joined Great Britain in declaring war on Germany. Seven weeks later, Carlton – with nine first-year players in the team – beat South Melbourne by one straight kick in a cliff-hanger Grand Final at the MCG.

Deep into the last minute of that match, the Blues were clinging to a six point lead when South’s rover Jim Caldwell took the ball in space at half-forward for the Bloods, and sent a long kick towards his team-mate Tom Bollard – alone in the goal square. Bollard seemed certain to take an easy chest mark - until Ernie Jamieson came from nowhere the last split-second, soaring over Bollard and punching the ball from his grasp. South’s fans howled furiously for a free to Bollard - claiming a push in the back - but umpire Harry Rawle refused them and Carlton won the flag.

Jamieson changed his guernsey number to 7 in 1915, and celebrated back to back Premierships with an emphatic 33-point Grand Final defeat of Collingwood. Winger George Challis (later to be killed in action in France) was superb for the Blues, while defenders Jamieson, Ted Brown, Andy McDonald and Paddy O'Brien blunted the Magpie attack all day.

Then, after a run of good fortune with injury, Jamieson’s luck ran out in the Preliminary Final against Fitzroy, when a badly-broken arm not only ended his season, but seemed to have terminated his career. Complications after surgery hampered his recovery, and for a while it looked like his VFL career was over.

Five years later, however, Jamieson surprised the football world and delighted Carlton fans by returning to Princes Park, keen to play again in guernsey number 4. Although 33 years old by then, Ernie was a solid contributor throughout a hard-fought 1921 final series, culminating in a heart-breaking 4-point Grand Final loss to Richmond on a muddy MCG.

Jamieson played on into the following year, and, in the absence of Horrie Clover through injury, captained the Blues into his last match - against South Melbourne at the Lake Oval in Round 5, 1922. The Bloods won by 28 points that day, to gain some small recompense from a player who had been a daunting and respected opponent for ten seasons.

Articles: Godfathers of the Goal Square