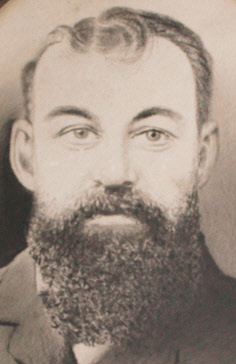 One of the pioneer players in 1864
Ben James may have been the first Carlton Captain.
In 1886, the Launceston Examiner quoted the Melbourne publication "Weekly Times" mentioning that the club has been established for 22 years, and gave a list of Carlton captains up until the present. (1886)
The first player listed was B. James, followed by the recognised first skipper, H. Chadwick.
See 1886 August 21.


Ben James a Carlton Cricket Club member and the hon. secretary of the cricket club, and was an enthusiastic cricketer.
James was one of the founders of the Carlton Football Club in 1864.

1869 September 4
B. James named in 24 man Second Twenty squad that played the Hobson's Bay Railway Club on the Melbourne Ground.

From "The Footballer" 1876.
(A Half Hour With An Old 'Un)
Reminiscing about the early days of football and footballers the writer mentions B.James ("old Ben's laugh was inimitable")

Everything You Wanted To Know About Australian Rules Football But Couldn't Be Bothered Asking. Graeme Atkinson. p205.

Ben James signature on the 1878 proposed football ground diagram on the rate-payers' petition to the MCC to provide a football ground for the Carlton Football Club.
To read club historian Tony De Bolfo's article on the found petition click here> www.carltonfc.com.au/news/2015-12-15/historic-princes-park-petition-found

Death of B. James

Tony DeBolfo from the Carlton Football Club wrote about Ben's portrait returning after disappearing for 30 years.
To read, click the link below;
www.carltonfc.com.au/news/2013-01-22/old-ben-bobs-up-after-30-years