Carlton would be a leader of the 'Melbourne Rules' competition.

Over the 12 years of participation in the 'Melbourne Rules' prior to joining the VFA in 1877, Carlton would be a formidable presence with 5 Premierships, 3 Runner-Ups and would never fall below third.

The Bairnsdale Advertiser February 3, 1915
"Fifty years ago the Carlton Football Club had a membership of 40. Now it has 5,000 members.
There was £8 in hand to start the season in 1865. Seven pounds sufficed for the year's requirements, and £1 was carried forward. It now takes many hundreds of pounds to meet one item - payment to players."

Carlton clarified it's "uniform" this year by wearing a blue band on it's orange cap.

According to wikipedia in 1865 Melbourne's population overtook Sydney to be the largest city in Australia.

This classified advert. is from the Herald April 25 (p4) 1865.
There is a thought that the club was formed in 1865 at the University Hotel meeting on May 17.
This advert predates that meeting and has Ben James as Hon. Sec. not as "acting Hon. Sec.". This indicates the football club was already formed, possibly as far back as 1861. See Formation of the Club
The Carlton Cricket Club also was called the Carlton Union Cricket Club, the Union name was dropped later in 1865.

May 17 Wednesday
"A meeting of the Carlton Football Club, was held at the University Hotel, last Wednesday, for the purpose of electing office bearers for the season, and adopting a code of rules for the guidance of the club. Mr. Waugh occupied the chair. The secretary was requested to communicate with James Linacre, Esq., asking him to accept the office of president of the club. Mr. John Walls was duly elected vice president; and the following gentlemen the committee, namely: - Messrs Waugh, McLean, McHarg, Richardson, Bowen, Byrne, McFarland and Adamson. Mr. B. James secretary.
After some consideration it was resolved to adopt the Melbourne Club rules."
(Trove: Age May 19 p5)

May 24 Wednesday
"A scratch match of football will be played among members of the Carlton Football Club today at 2.30." (Herald p2) 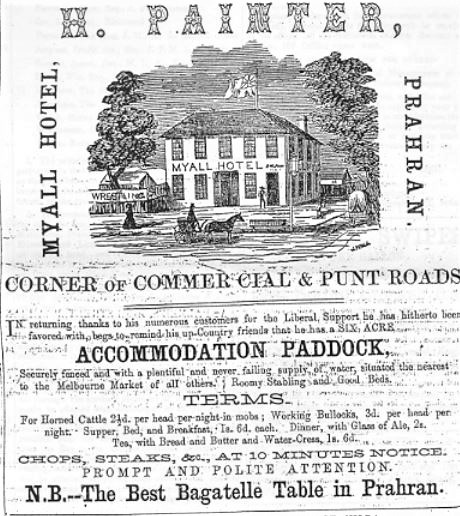 There was a Myall Hotel, (the second hotel built in the Prahran area) on the south east corner of Punt and Commercial Roads. The hotel had a 6 acre parcel of land attached to it. This paddock was called the Myall Green. Regular sporting events were held on this allotment and could have been the Myall ground that Carlton played on.
The Argus 26 July 1921 (p4) mentions Myall Green being opposite the Myall Hotel which stood on the south east corner.
In 1860 a government reserve ran between St.Kilda Road to Punt Road bounded on the north side by Commercial Road. Today the Alfred Hospital occupies much of this land.
In 1865 horse racing was held in Fawkner Park, (diagonally?) opposite the Myall Hotel.
The Fawkner Flats or "Mansions" were built on the hotel site around 1890. These were later turned into nursing homes for the Alfred Hospital, which later became rooming homes that fell into disrepair.
The latest google street view (viewed Sept. 2020) shows the vacant red brick building still standing.

The players met at Princes Bridge at a quarter to two.
This is the earliest Carlton team squad yet found and some say Carlton's first match.
However, there is anecdotal evidence that the Blues played matches in earlier years. See Formation of the Club.
Carlton team; (27 named)
Chadwick, Adamson, Bowen, Buchan, Byrne, Duncan, Fargher, Gaggin, Gordon, Gorman, Greeve/Green?, Guy, Hewitt, Hillsden, Horan, James, McCracken, McFarland, McHarg, Orlando O'Brien, Tom Power, J. Richardson, Tinlay/Finlay? George A. Waugh, M. Webb, Jim Williams, Bill Williams.
Match drawn 0 - 0
Blueseum has put the players in alphabetical order, except for Chadwick. The Herald May 27 (p2) named Chadwick first of the 27 mixed names. Was he possibly captain?
Other information Blueseum has found is that in the formative years a player was chosen as captain on the day.

"A report of the Health Committee recommends the granting of permissive occupancy on a piece of land between the Sydney road, Madeline street and Cemetery Crescent, by the Carlton Cricket Club, on certain conditions. Clause 24 of the Public Heath Statute, 1865, is also to brought under the notice of the council." (Herald p2)
(Madeline Street is now known as Swanston Street)

The Warehouseman were dock warehouse/storemen, the forerunners to the Waterside Workers or "wharfies". Their home ground was the Warehousemans Ground which is now called the Albert Ground and is situated on St.Kilda Road.

The Age June 10 (p5); A football match between the Carlton and the Warehouseman's clubs will be played this afternoon in the Prince's Park, near the cemetery, the game to commence at two o'clock. The Carlton team will be selected from the following, viz:
Carlton team; (26 named)
Dave Adamson, George F. Bowen, James Byrne, Harry Chadwick, J. Clark/e, Jim C. Duncan, Fargher, Gorman, Green, Harry Guy, Harper, Frank Hillsden, James Horan, Ben James, Lucas, Robert H. McFarland, Andrew W. McHarg, Jack McHarg, Orlando O'Brien, Phillips, Tom Power, J. Richardson, George A. Waugh, M. Webb, Jim Williams, Bill Williams.
The Age;
"At the Royal-park, the Warehouseman's Club met the Carlton Club, and here too a close game was played, neither side succeeding in kicking a goal, though the game was continued till the coming night rendered it impossible to proceed further. On both grounds the drizzling rain, which began to fall about four o'clock, rendered foothold after that hour very precarious, and, as a consequence, some of the players got ugly falls-one, at the Royal Park, having the misfortune to break the cartilage of his nose."
Match drawn 0-0

The Leader newspaper (p2);
"Football, which last winter was much neglected for that class of community to whom out-door sports are almost a necessity, seems this year to regaining something of the position to which it is entitled in the list of manly pastimes. On Saturday two very interesting and closely contested matches were played."
The two matches referred to were the Civil Service vs Customs Department and the Carlton vs the Warehouseman's Club.

Football had been on a gradual decline since the first few years of the game. The patrician clubs of Melbourne, South Yarra, and to some extent the provincial Geelong Club with its Geelong Grammar background did not appeal to the masses of the metropolis. With the advent of the Carlton Football Club and it's the working class connections, the club soon became competitive against the earlier established clubs.
The Carlton - Melbourne rivalry would soon fire the imagination of Melbournians and draw record crowds. These two club matches would over the next decade firmly place Australian Football to the fore in the public's eye, with the continuing dominance of Australian Football to the present day.

June 24
No details
The Age said that only scratch matches were played on the football grounds.

Bell's Life newspaper reported that Royal Park won 2-0, with the last goal being disputed.
A letter to the paper a few days later by a person called "Orange and Blue"* says the published result is incorrect, and that the match was drawn, "If they had won two goals on 1st. July, what game could be played out on the 8th?"
In the early days of football two goals was required to win a match, a score line of 1-0 was a draw and if possible the match replayed the following week.
The book the Centenary Souvenir of the Carlton Football Club says the Blues lost this match.
.* "Orange and Blue" is possibly Carlton player and administrator Tom P. Power

July 08
No details
Possibly resumed the match against Royal Park.

August 12
Carlton played a practice match in Princes Park at 2.30pm, in preparation of the Challenge Cup match.

September 02
Carlton were fixtured to play the Holders of the Cup.
The Sports Committee recommended that University should play Carlton for the Cup.
University played South Yarra instead.

September 09
Carlton played South Yarra for the Challenge Cup at South Yarra.
The South Yarra ground was on the green at the rear of the English Church.
Possibly the Anglican Christ Church on the corner of Punt and Toorak Roads.
The report said that Carlton wore an orange cap which made them easy for the spectators to spot from the motley colours worn by the South Yarra team.
The Blues kicking was as good as the Yarrites, but the opposition's dodging and quick turning was better.
After half an hour's play South Yarra's goal was allowed after the Blues claimed it was touched.
Budd of South Yarra scored the second and winning goal.
Chadwick captained Carlton.
Umpires; G.M. Nichols, Fitzgerald.
Carlton lost; 0-2
The Blues only played one game for the Cup in 1865 against South Yarra and were defeated. 0-2.
Play lasted from 2.45pm until 5.20pm when H. H. Budd of South Yarra kicked the winning goal,
"It was a magnificent place kick from 50 yards in front of the posts".

I was there when H. H. Budd (South Yarra) made that famous place kick (70 yards if it was an inch) that defeated Carlton the first time the latter had played with the oval ball, and a little one, too, at that.
The Footballer 1876.

The Argus, Monday 11 September 1865 (page 5), refers to the match-
The football contest Saturday afternoon for The Athletic Sports Committee's Challenge Cup was between the South Yarra and Carlton Clubs, who met on the ground of the former club.
South Yarra, who were the holders of the cup, succeeded in winning the match by obtaining two goals, one of which was kicked by Budd, and the other by Greene. These were the only goals got during the afternoon. O'Mullane was captain of the winning, and Chadwick of the losing side.
The Carlton Club ascribe their defeat to the fact that they were obliged to play with the oval, or Rugby ball, while they had always been accustomed to the round ball; and they complain that their opponents would not allow the round ball to introduced even after they had won the first goal.
The South Yarra Club have now won the cup twice, being the only club standing in that position. If they win it a third time, they will, according to the rules, be entitled to retain possession of the trophy.

September 15 Friday
The Argus, p8
GENERAL MEETING CARLTON FOOTBALL CLUB will be held at the Rifle Brigade Hotel, Carlton, at half past 7pm. This Evening. B. James Hon Sec.

September 16
The Argus;
"A general meeting of members of the Carlton Football Club was held last evening at the Rifle Brigade Hotel, Carlton, for the purpose of winding up the affairs of the club for the past season, and also to make arrangements for a dinner to be held next Wednesday.
Mr. R. McFarland was in the chair. The secretary, Mr. B. James, read a report of the doings of the past season, showing that the club had only one match out of ten, and had a balance in hand at the present time.
After a vote of thanks to the office-bearers for the past season, the meeting adjourned."

September 16;
The Age;
"A meeting of the Carlton Football Club was held at the Rifle Brigade Hotel, Lygon-street, last evening, for the purpose of receiving the committee's report of the past season, and for disposing of other business in connection of the club. Mr. McFarland occupied the chair.
The secretary, Mr. B. James, read the report, from which it appeared that the members had lost one match out of nine, and had a small balance in hand.
The report was unanimously adopted, and after a vote of thanks had been passed to the chairman, and to the office bearers, the meeting broke up."

September 16
Melbourne played South Yarra for the Challenge Cup.
Melbourne were short of players and two Carlton men played for Melbourne, Gorman and Toohey.
South Yarra were in the same predicament and Carlton's Chadwick played for the Yarra-ites.