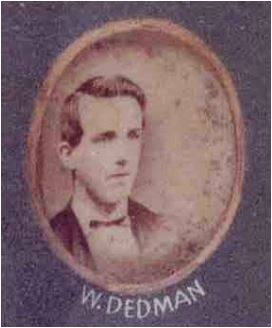 Right: Dedman is pictured in the Norwood Football Club team photo of 1879

1871 Goal kicker in final of the South Yarra Cup played at Albert park.

1874 The goal sneak par excellence; active, quick, and straight and puzzling to play with.

1875 (At Carlton AGM) received a locket, and scored 5* goals against Maryborough
(*might not be included in season's total)
(Centenary Souvenir of Carlton Football Club p 9,10,11)

1875 The Argus has Dedman named in a Carlton First Twenty side to play against a Carlton 25 in a scratch match at Royal Park on Saturday 8th. May.

1876 Absent in some of the early matches through illness, but soon totted up his score of goals, a terror to backs, whom he keeps constantly on the alert.
(The Footballer. 1876 p34)

1876 18 goals.(Champion of the Colony goal kicking.)
(The History Of The Carlton Football Club, Brian Hansen p33)

"the goal sneak par excellence".
Mentioned as one of the star players of 1874.
(The Carlton Story, H.Buggy and H.Bell, p31)

The prince of goal sneaks and was among the prominent players about this time.
(The Herald. June 14 1919.)

Dedman left Carlton at the end of the 1876 season.

Billy Dedman also played for the Norwood Football Club in South Australia.
Norwood Football Club won 10 premierships between the years 1878 - 1889.
Billy Dedman was a member of some, or all of those sides.
He played along side former Carlton players A. E. 'Topsy' Waldron and a W. 'Billy' Bracken.
(Everything You Wanted To Know About Australian Rules Football But Couldn't Be Bothered Asking. Graeme Atkinson. p142)

1880 W. H. J. 'Billy' Dedman wrote to the editor of the South Australian Advertiser about his proposal to start a Junior Football Association in Adelaide along the lines of what is being run in Melbourne.
He talks about Carlton's relationship with Carlton Imperial.
To read his letter click here> http://nla.gov.au/nla.news-article30799896

1881 The Examiner (Launceston) December 6, reporting on the local season, says the City club has improved because of their "coach" W. Dedman late of both the Carlton and Hotham clubs, who has proved a valuable acquisition to City's ranks.

The Launceston Examiner (September 06) reviewing last Saturday's matches says;
"The feature of the match (City vs Launceston) was undoubtedly the splendid kicking of Dedman, who scored five goals out of eight and grand kicks they unquestionably were. The veteran received numerous congratulations, and it was without doubt a brilliant finale to his football career. I have seen matches played in all parts of Australasia, but I have never witnessed a more solid kicking than that of Dedman's last week."
"I hear the skipper of the City team is to be presented with a substantial token of regard by his numerous admirers for the manner in which he has worked on behalf of the City Club and in the cause of football generally during the last three years he has resided in Northern Tasmania."

1885 April 18
The Launceston Examiner writes about a meeting of the second twenty of the City Football Club held at Mr. Dedman's Sporting Hall.
One of the delegates elected to represent the City team in the Junior Football Association was a Mr. W. H. J. Dedman.

1889 July 01
The Launceston Examiner mentions a Melbourne paper which compares a South Melbourne player with Billy Dedman.
"Barrett bids fair to become a second Dedman in this respect, and comparison with the once famous Billy Dedman is about a high a compliment as a goal sneak or a forward player could wish for."
The Examiner said;
"It must be gratifying to the old City captain to think that he is still held up as an example. When in his prime he was undoubtedly one of the best goal sneaks in the colonies."

1891 June 13
Billy took part in an old players match Carlton v Geelong on the MCG to raise money for the Childrens' Hospital.
George F. Bowen writing about this match in Punch June 18 p11;
"Dedman, the dodger, the sneak A1
That hath ever sneaked 'neath Australia's sun."

1902 May 02
W. Dedman was given a reception by leading local citizens in the Brunswick town hall. He was leaving the district and taking up a position in the Melbourne and Metropolitan Board of Works.
Dedman was responsible for starting the Brunswick Football Club.
To read the Coburg Leader's article click here> http://nla.gov.au/nla.news-article66823391

1920 July 24
Billy Dedman passed away on July 24. He died one day after another former Carlton great and team mate, Billy Goer.

1921 October 01
"Joe" Traynor former Hotham (Vic) and later Norwood (S.A.) great, was talking about past players of Norwood. He says of Dedman;
"He could use either foot and kick any way - place, drop, punt, overhead, or at any angle. He was one of the many shining lights of a team whose work cannot all be particularised in a single article. (The Mail S.A. p3) 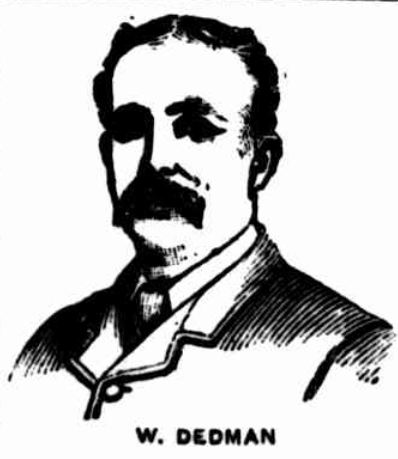 Taken from a Melbourne weekly,
"It is with extreme regret I have to record the deaths of "Billy" Goer and "Billy" Dedman, two famous champions of the Carlton Football Club in the seventies.
The former was a dashing and fearless back player, and an idol of the crowd. He died in Sydney on the 23 July.
The late Mr. Dedman was more widley known as he continued his connection with various forms of sport until shortly before his death on 24th. July.
Mr. Dedman was undoubtedly the most successful goal-sneak of his period, and became famous for his superb accuracy and agility on the forward line. During one season he registered a third of the goals to the credit of the Carlton team.
In later years he sat as a delegate for Brunswick in the Victorian Football Association.
He was also a hard hitting batsman of the Carlton Cricket Club. He was very proud of a mighty hit he accomplished off the trundling off "the bowler of the century"-the late Frank Allan which landed the ball in the street outside the Carlton ground.
The Jubilee Book of the Carlton Club discloses the fact that he was elected as honorary member as far back as 1868, in recognition of his father's magnificent work in connection with Mr. Craven, in the financing, forming, and beautifying, the "Old Triangle" ground.
He was first in the batting for the second eleven, in 1870-71, and also in 1872-73, and second in 1876-77 for the first eleven.
Years afterwards he was a great factor, along with H. Bushel and others in the transference of the management of junior cricket from business firms to a properly constituted association.
In recent years he has confined his attention to bowls, and was a member of the Victoria Club at the time of his death. He was also prominent in A.N.A. (Australian Natives Association: Blueseum) circles, and possessed fine oratorial powers.
He was greatly admired for his manly traits of character and thorough sportsmanlike actions.
He will be sadly missed by a wide circle of friends."
The present day footballers in Tasmania did not know "Billy" Dedman, but the old fellows will recall that he came to Tasmania as captain of the Hotham team about 1880*, which South Tasmania, captained by J. Masterson, defeated.
Mr. Dedman took up his residence in Launceston, and became captain of the City Club, and also became a prominent figure in junior cricket circles.
He was a great general, and very popular."
.* A letter to the editor the following week said Dedman was the match umpire and was not with Hotham.

1926 June 11 p14
Sport, an Adelaide newspaper, wrote about the players of the South Adelaide club of 1877.
"W. Dedman, goalsneak "par excellence" of the colony, and when required a grand half back or wing player." 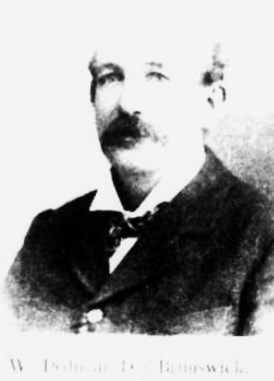