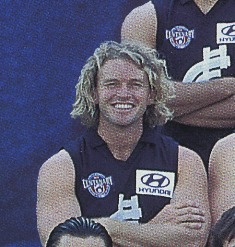 Devonport had a notable career at St Kilda from 1989 to 1995, playing 94 games and booting 80 goals. A versatile utility – capable of flashes of brilliance, but equally, lapses in concentration - he was traded to Carlton by the Saints for an early draft selection. In turn, St Kilda used that pick (#19 in the 1995 National Draft) to procure power forward Barry Hall.

Devonport is perhaps best remembered at St Kilda for being publicly berated by then St Kilda coach Ken Sheldon on the boundary line at the MCG during the 2nd quarter of a Queen’s Birthday Monday match (Round 12, 1992), before going on to kick the winning goal in a match the Saints won by a point.

Devonport was a good player at St Kilda, but the trade turned out to be a shocker for the Blues. In his short stay at Princes Park, Devonport played just one senior game in Round 4 of his only year at Carlton, 1996 and kicked two goals.

Incidentally, Devonport showed a bit of promise in the 1996 Pre-Season for the Blues, so much so that one of the commentators remarked that 'Devonport could well be a replacement for the ageing Craig Bradley'. History will show that Devonport finished in 1996 whilst the remarkable 37 year old Bradley finally retired in 2002, some 6 years later!

Two goals in your first appearance would normally entitle you to further games, but like 1902 Blue Herb Hainsworth, who also put two through the middle on debut, Devonport was not selected in the senior team again. He was delisted after only one season, and his number 8 guernsey was passed on to future Blues’ Best & Fairest Lance Whitnall.

Devonport was originally recruited from Croydon, he also played at Seville.

In 2002, Devonport lined up for WRFL club Parkside.

Articles: That First Pick... Players taken with Carlton's first pick in the draft