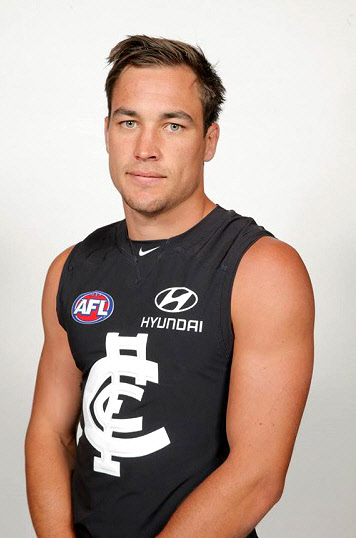 A tenacious small midfielder-forward, David Ellard’s path to Princes Park began at Guildford Grammar School, then the Midvale Football Club in Western Australia. After one brief season with Swan Districts in the WAFL in 2007, he was recruited by Carlton at selection 34 in that year’s Rookie Draft.

Ellard had represented WA at Colts (Under 18) level, where his intensity at the contest - along with his goal sense - shone through. At Carlton it was his work ethic that impressed, and after only a brief grounding with the Bullants, he was promoted into the senior squad when Andrew Walker was placed on the long term injury list because of persistent shoulder problems.

Allocated guernsey number 46 by the Blues, David experienced the thrill of his first AFL game on home turf in WA, against West Coast in round 7, 2008. On that Friday night under lights at Subiaco Oval (incidentally, in Carlton captain Chris Judd’s first outing against his old club) Ellard was sent onto the field late in the first term. Some thirty minutes later, with half-time approaching, David kicked his first career goal from a set shot about 40 metres out on a slight angle, and the Blues went on to record a 37-point victory.

Although he had ticked most of the boxes on debut, Ellard spent the rest of season 2008 with the Bullants, then found himself back on the rookie list for 2009 when Walker recovered earlier than at first thought. To his credit, Ellard took that personal setback on the chin, and worked his butt off to keep his name under the noses of the match committee all year. He had a stellar season with the Bullants, helping the boys from Cramer St. into the VFL Grand Final, before winning the Ants’ Best and Fairest award, and being judged Best Clubman for the Blues.

All that dedication paid off when David was elevated to Carlton’s senior list at selection 99 in the 2010 National Draft. But even then, his patient wait for another chance at AFL level wasn’t immediately over. It was late July before that longed-for call-up came in round 17, 2010 – again at Subiaco, and again against the Eagles. Playing in the midfield, Ellard picked up West Coast playmaker Luke Priddis, and kept him under a tight rein as the Blues came from behind at half-time to win by 26 points.

The bustling number 46 was a fixture in Carlton’s team throughout the rest of that encouraging season, which nevertheless ended in frustration for every Carlton diehard after the Blues suffered an unjust Elimination Final defeat at the hands of Sydney. Playing in a final in only his eighth senior appearance, Ellard spent much of the game in the midfield, as his team squandered multiple chances to win in the last quarter, and crashed out of contention by just five points.

As 2011 unfolded, Ellard again cooled his heels in the VFL until he was recalled for the Blues’ tight round 5 win over Adelaide under lights at AAMI Stadium, David put in perhaps his best performance to date that night, racking up 25 possessions and two excellent goals - one from outside the 50-metre arc during Carlton’s last quarter surge. A week later, he achieved the milestone of becoming Carlton’s games record holder in guernsey 46, when he overtook John Warden's previous record of 9 matches. This was later eclipsed by Matthew Wright who wore guernsey 46 for 65 games from 2016 to 2018.

In September, Ellard took that tally to 27 games after the Blues went down swinging in a pulsating Semi Final loss to West Coast at Subiaco. Starting from the interchange bench, he came on to play with his usual tenacity and racked up 15 possessions, 5 marks, 4 tackles and 2 goals. Although another year had ended prematurely for the Blues, David was rewarded with a new 2-year contract before the month was out, ensuring that he would remain at Princes Park until at least 2013.

When his fifth season at Carlton began in 2012, Ellard was again forced to wait until well into the season before being called up to resume his senior career. Back again for round 6, he played the next half-dozen matches in succession – highlighted by prominent roles against Melbourne in round 9, and Port Adelaide in round 10. But a fortnight later, he was somewhat controversially dropped from the team, and managed only three more games in the second half of the year. While he was out of the side, Carlton lost five of their last ten matches.

When the Navy Blues wound up tenth and missed the finals, senior coach Brett Ratten was sacked in favour of former West Coast and Collingwood Premiership coach Mick Malthouse for 2013. For Ellard however, that change at the top meant little, because like a number of his team-mates, his season was almost completely wrecked by injury.

After having to wait until round 6 for his first opportunity to impress Malthouse at senior level, David’s tackling stood out again as he helped drive his side to a big win over strugglers Melbourne. Then one week later against St Kilda, he tore a calf muscle in the first minutes of the match. Another 16 weeks of recovery and rehabilitation followed, before he worked his way back to senior football in Carlton’s dramatic victory over Port Adelaide in the last home and away game of the year. Even so, with his fitness base eroded by such a long lay-off, he wasn’t included in either of Carlton’s finals teams. 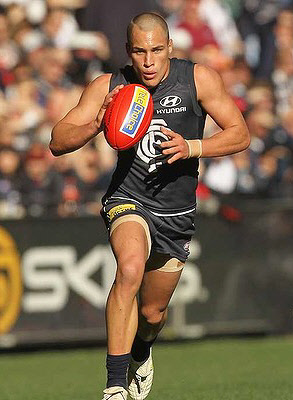 Ellard needed a change of luck in 2014, but didn’t get it. Carlton endured a horror season that began with four straight losses and ended with the team anchored in 13th place on the ladder. Throughout the year, David continued to battle injury, with a thigh strain in round 5, an Achilles tendon problem in round 11, and a badly-sprained right foot in round 21 restricting him to only 13 senior appearances for the season. His tenacity never waned however, and at just 25, his best football seemed still ahead of him.

Sadly, neither David nor anyone else at Carlton foresaw the disasters coming to Princes Park in 2015. The Blues were beaten in their first three games of the season, and from then on the year turned into another train-wreck. By May, when Malthouse was sacked and replaced by his assistant John Barker on a caretaker basis, Carlton was already shattered by injuries to many key players, and well on the way to collecting another wooden spoon.

Ellard played in five of Carlton’s first seven matches, before yet another soft tissue strain added his name to the injury list. In July, he fought his way back into the senior side for the last four games of the year, only to spring something of a surprise by announcing that he intended to retire after Carlton’s final match of the season against Hawthorn. Whilst developing his AFL career, David had also qualified as a carpenter, and had decided to accept an offer to use those skills in a business venture.

Blues interim coach John Barker expressed the general reaction of everyone involved during Ellard’s time at Princes Park when he said, “He has been a great clubman, David Ellard, and he's one of those guys who has got absolutely everything out of himself. You have to look up to him because his work ethic - his want to continually improve. His hardness and competitiveness has been a real standout for us, and he's also set a great example for the younger players.”