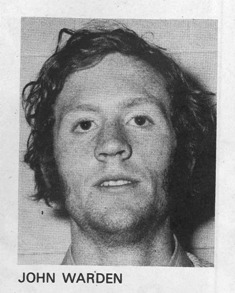 John James Warden was a tall, lean, red-haired left-footer who joined Carlton’s Under 19 squad in 1969 from that prolific football nursery; St Mark’s College at Fawkner. Although he was blessed with considerable ability, Warden’s potential at VFL level was never truly realised. He made his senior debut in 1971, but thereafter his opportunities were limited by the sheer quality of a playing list that brought three Premierships to Princes Park in five seasons.

Warden was allocated guernsey number 46 when he was promoted to Carlton’s senior squad. He sat on the Reserves bench for two games, before making it into the starting line-up for his first full match against Collingwood at Waverley in round 11, 1971. Playing across the centre alongside Billy Barrot and Trevor Keogh, John made an immediate impression, and was named among his side’s best contributors - despite being on the end of an awful 85-point flogging by the Magpies.

In the aftermath of that humiliation, Warden played another six matches through to round 21, when the fifth-placed Blues travelled to the Junction Oval to play Fitzroy (eighth on the ladder) in a truly bizarre encounter. The second half of the game was played in a blanket of thick fog that rolled in from nearby Port Phillip Bay, and Carlton’s unexpected loss to the Lions cost the Blues a place in the finals. The Reserves team made it through to September however, and Warden completed his debut VFL season playing against Richmond in the curtain-raiser in front of a huge crowd at the MCG on Preliminary Final day. The Tiger seconds were rampant from the first bounce, and easily beat the Blues by 48 points.

In 1972, Warden switched to guernsey number 9, but it didn’t improve his prospects all that much. He played only two senior matches – both off the bench – while busily re-inventing himself as a half-forward with the seconds. In September, while Carlton was preparing to meet and beat Richmond in an epic Grand Final, Warden kicked four goals from centre half-forward in an entertaining flag decider against Hawthorn Reserves. Veteran Garry Crane and Warden were Carlton’s best in a 33-point loss to the Hawks.

John next endured a fruitless 1973 with the seconds, before being told that his immediate future was to be in Tasmania. Keen to obtain the services of Cooee Football Club’s tough centreman Greg Towns, the Blues had come to an arrangement whereby Warden and utility Peter Fyffe would fly to Tasmania each weekend to play with the Bulldogs, in return for them clearing Towns to Carlton. It was a curious arrangement, and not surprisingly, it lasted only one season.

Meanwhile, VFA club Brunswick was languishing in 2nd Division of their competition, and searching hard for the talent to take them back to the top tier. When word reached the club’s committee that Warden was available, the Magpies bit the bullet and offered him the captaincy for the 1975 season – which turned out to be an inspired decision.

Joined in the black and white stripes by three other ex-Blues in Doug Baird, Derrin Skidmore and Ken Laker, Warden had a standout first year at centre half-forward for the Wicks, culminating in 47-point Grand Final victory over Camberwell. Baird kicked 95 goals for the season at full-forward, while Warden led his team with aplomb and booted 55 majors.

After the Magpies finished eighth in 1976, Warden relinquished the captaincy to concentrate on his studies for a University degree. He stayed on with the team for one more year, but retired for good in 1977.

Chris Judd leads his team off the field.jpg