Carlton's season from hell ended at last, with a 57-point defeat by Hawthorn at the MCG.

Ten minutes before the opening bounce of this game against Hawthorn - Carlton’s last match of a truly awful season for the Blues – word came through that the Brisbane Lions had scored a shock win over the Western Bulldogs and climbed off the bottom of the AFL ladder. Brisbane’s victory almost guaranteed that Carlton would collect yet another wooden spoon, unless they could somehow upset the Premiership-winning team of the past two seasons. Only six weeks beforehand, the Hawks had won the previous encounter between these two sides by 138 points and remained at almost full strength. By contrast, the struggling Blues - with more than a dozen first-choice players unavailable - had lost nine of their last ten games.

Carlton’s injury list lengthened during the week, when Chris Yarran and Sam Docherty became the latest casualties. They joined Bradley Walsh on the “outs” list, with Andrew Carrazzo, Nick Holman and Clem Smith recalled as replacements. That very day, the AFL had decided to scrap the unpopular substitute player rule from 2016, so Smith became a trivia subject as the last Bluebagger to start a game in the reviled red vest. Furthermore, two of Carlton' most popular and respected players of the last decade – Andrew Carrazzo and David Ellard – had opted for retirement after this game, and it was hoped that their decision would inspire the team to send them off with a win. Sadly that was not to be. 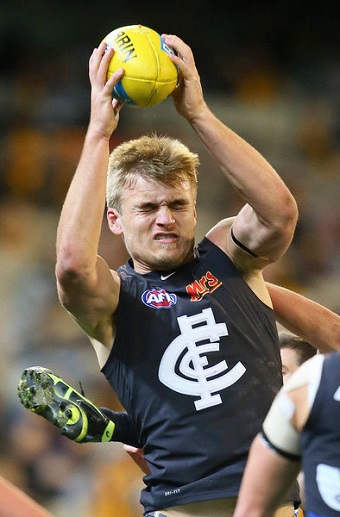 Indeed, the game began in sadness when the teams ran out together through a banner emblazoned with the single word, “Family” as a tribute to Cooper Ratten, the teenage son of former Carlton champion and Hawthorn assistant coach Brett Ratten. Shortly after the last Blues-Hawks game, Cooper had tragically lost his life in a car crash, and the outpouring of grief from both clubs had by no means subsided. At the opening bounce, Matthew Kreuzer won the tap, but Hawthorn quickly got into stride and kicked the first goal of the match. While the Blues were determined early, Hawthorn’s foot skills and poise under pressure was obvious and they should have led by more than 25 points at quarter-time.

The second quarter began with a goal to Andrew Walker after an exhilarating passage of play from Ellard, Ed Curnow and Tom Bell. Patrick Cripps and Jason Tutt were working hard, and although Hawthorn constantly threatened to break away, the resolute Blues stayed in touch until umpire Ray Chamberlain – not for the first time in his career – awarded a ridiculously technical 50-metre penalty against Mark Whiley. The resulting 6-pointer to the Hawks stretched their advantage to 35 points, and preceded a frustrated Kade Simpson being reported for high contact. Late in the quarter, Cripps’ long kick to the left forward pocket was marked by Bell, who chipped the ball to the lively Andrejs Everitt, and his straight kick for goal kept the Blues in the contest, trailing by 30 points at the long break.

Hawthorn coach Alistair Clarkson demanded a lift from his team in the third quarter and got it, although it cost the Hawks when Jason Tutt ran down his opponent Isaac Smith in a brilliant tackle. The Hawk speedster limped from the field with a damaged knee and was soon substituted out of the game, as Hawthorn rallied to kick five goals to Carlton’s one and seize complete control.

The Blues’ last gasp of defiance came with majors to Matthew Watson and Andrew Walker in the early stages of the final term. Although Michael Jamison, Zach Tuohy and Sam Rowe continued putting up bloody-minded resistance in Carlton’s defence, Hawthorn cruised to the line and on the final siren the margin was 57 points.

So at long, long last, the torture of 2015 was over, and the first steps on the road to recovery by a once-mighty club could begin again. The question was, would this ordeal forge a new Carlton, as it had on other occasions down through history – or would the club stumble once more, and remain in the abyss?