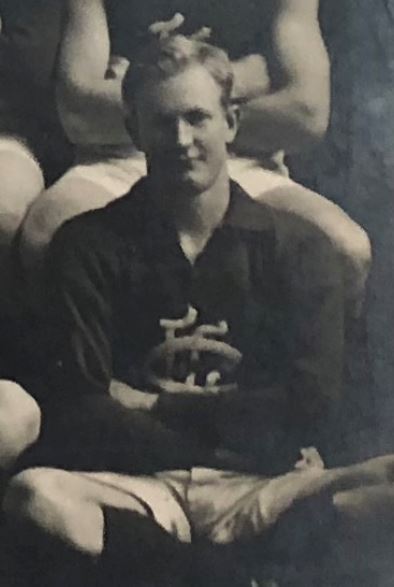 A lightly-framed, but talented wingman whose opportunities were limited by injury, Ernie ‘Snowy’ Martin played only 21 VFL games, with a span of more than six years between the first and last of them. During that time, he appeared at senior level with both Carlton and Essendon, won two successive Premierships with Coburg, and in 1927 was voted the Best and Fairest player in the VFA. Later, he served his country with distinction throughout World War II.

Martin was born in Sydney in the first decade of the 20th century. In his early childhood his family moved to Melbourne, and by his early teens the fair-haired, blue-eyed youngster had embraced the ‘southern game’ of Australian Rules football. Although he was only slightly built and always shorter than most other young men of his age, Snowy proved to be a terrier on the field. He wasn’t often beaten once the ball hit the ground, and his raking drop-kicks to position became his trademark.

Martin played briefly with Essendon Reserves during his late teens, before crossing to Carlton District and then on to Princes Park in 1923. But his debut match for the Blues, against South Melbourne at the Lake Oval in mid-June, was a double disappointment – Carlton lost by 2 points, and a serious leg injury brought Snowy’s first season to a premature end.

In fact it was almost two years before Martin returned to the field for the Blues, in round 7 of 1925, against Richmond at Princes Park. Carlton won by 21 points and briefly resurrected a season that was heading downhill, before Collingwood skittled the brittle Blues in round 8, and Melbourne added insult to injury by handing out a 77-point thrashing in round 9. That humiliation burned deep for the Blues, and sent the season right off the rails when simmering tensions involving the committee and the players broke into the open. Among the casualties who left the club in the wake of that black day was Ernie Martin.

Meanwhile, to the north of Princes Park, the Coburg Football Club was celebrating a stellar debut season in the VFA First Division. One of three Second Division clubs promoted in 1925, the Lions had covered themselves in glory by making the finals and finishing fourth – but the best was yet to come.

Led by a dynamic committee and coached by former North Melbourne champion Charlie Hardy (Charlie would coach Carlton Reserves in the 1930's), the Lions went on a recruiting spree that netted a number of disaffected VFL players, including Ernie Martin. Coburg then swept all before them, and beat Brighton by 16 points in the 1926 VFA Grand Final – with Snowy the popular choice as best man on the ground.

In 1927, Coburg defeated Brighton again in the Grand Final (this time, by six goals) to snatch their second VFA flag. Ernie Martin went one step further too, when his remarkable consistency was rewarded by that season’s Recorder Cup as the Best and Fairest player in the competition.

Then, when Charlie Hardy accepted a lucrative offer to coach Essendon in 1928, he convinced a number of Coburg players to take the plunge with him, including Martin. At 25 years of age, Snowy was at the peak of his career. He impressed in his first handful of senior games and seemed set for a long stay at Windy Hill - but he cruelly twisted a knee mid-way through that first year, and from then on, was never the same player. After battling through to play 17 matches for the Dons in two seasons, he finally retired in 1929. Martin then returned to Coburg in 1931 and again won the best & fairest in 1932 playing a total of 78 games for the club. His impact in the periods he played left indelible memories of what players of that era went through, but inevitably returned to the club that gave them a chance.

A decade later, when Australia was swept into World War II, Snowy Martin joined the Australian Army and spent most of his time in uniform transporting supplies to front line units. In 1944 he was among the first Australian troops trained to operate a revolutionary amphibious landing craft the US Army called the DUKW. Made of aluminium, and shaped like a large lifeboat, the DUKW was fitted with six wheels and tyres specifically designed to haul it up sandy beaches. The Aussies quickly named it the ‘Army Duck’ and used it extensively throughout the South Pacific for the remainder of the war.

Happily, Ernie survived his five years of soldiering, and came home safely to his family soon after the Japanese surrender to the Allied forces in August, 1945. He later settled in Preston, and remained an active member of the RSL (Returned Servicemen’s League) until he passed away at the grand age of 93 in September, 1996.

Check the Coburg web site as an image is soon to be put on to their web site (August 2017)
http://coburgfc.com.au/hall-of-fame/