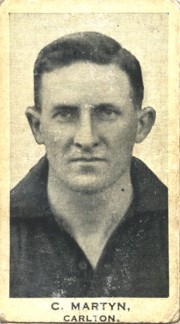 Among the most skilful of players ever to grace the expanses of Princes Park, Colin Martyn was prised from the grip of VFA Premiers Coburg by the Blues in 1928. He went on to play finals football in each of his five seasons in navy blue, and captained Carlton and Victoria in a short, yet memorable career.

Martyn burst into the limelight as a star centreman with Coburg in 1926. Playing in only their second year of senior VFA competition, the team then known as the Lions sensationally beat Brighton by 16 points in a fairytale debut Grand Final victory. Acclaimed as the outstanding player on the ground, Martyn controlled the middle of the Melbourne Motordrome throughout that cool afternoon, and rarely wasted a kick. His pace, ball-gathering ability and accurate disposal set up play time and time again for his team, and the Baysiders had no match for him.

In the weeks after that triumph, Carlton joined a number of other VFL clubs clamouring for Martyn to join them. But having grown up through the ranks at Coburg with his closest mates, the quiet, reserved Martyn wasn’t going anywhere. He stayed put with the Lions and promptly won another flag when Coburg defeated Brighton for a second time in 1927.

Meanwhile, over at Princes Park, Carlton had just lost a torrid VFL Semi Final to Richmond by 6 points. Encouraged by their first finals appearance in five years, the Blues felt that they were only a player or two short of being a genuine flag contender in 1928 – and that one man who just might make the difference was Colin Martyn. So Carlton’s captain-coach Ray Brew was despatched back to Coburg on a mission to get Martyn into a navy blue guernsey, and eventually convinced the 25 year-old to have a crack at football at the elite level.

As things turned out, it didn’t take long for Martyn to justify Carlton’s belief in him. He was assigned guernsey number 2 for his debut match against Hawthorn at Glenferrie Oval in May, 1928, and played a blinder in the Blues’ 34-point win. In fact, his first half-dozen matches were so good, he was an automatic selection in the Victorian team for that year’s interstate carnival.

But unfortunately for the Blues, our resurgence as a finals contender coincided with the onset of the Great Depression - and the rise to power of the Richmond Tigers. The ongoing traditional rivalry between our two clubs was born in the economic and social hardship endured by all Australians for a decade from 1929. Throughout those harsh years, while unemployment in Australia reached 30%, and soup kitchens were set up in every major city, Richmond were perennial finalists. The Tigers won two flags, and knocked Carlton out of contention in each of the first five finals played between the two clubs.

By 1931, Martyn’s influence was recognised by his appointment as vice-captain – a position he held for only four matches. In late May of that year, Carlton travelled to Geelong to take on the Cats in the match of the round. But in a foretaste of later events, the Blues lost by six points in a thriller. The bigger loss however, was that of veteran captain Ray Brew, who suffered a career-ending knee injury.

For the rest of that season, Martyn stepped into a familiar role as acting captain with the same competence he had always shown in the past. Never a ranter, he led by example; preferring encouragement rather than criticism to inspire his men. Perhaps impressed by such calm effectiveness, the state selectors went one better than Carlton, and made Martyn captain of the Vics for two games against South Australia in mid-season. Later in the year, the Blues finished third on the ladder, and thrashed Collingwood by a massive 88 points in the first Semi Final - only to endure another heart-breaking, 6-point defeat by Geelong in the Preliminary Final.

Martyn was confirmed as captain of the Blues for 1932, and seemed on the verge of Premiership glory at last when Carlton finished the season as minor premiers over Richmond, Collingwood and South Melbourne. The Blues knew that Richmond loomed as our biggest threat, and threw all they had at the Tigers in the Second Semi. Carlton were up by 13 points at the last change, before Richmond somehow summoned the resolve to blitz us by 25 points in the last quarter.

With backs to the wall yet again, the Blues produced another superb effort in the Preliminary Final to slaughter Collingwood by 75 points. For the second year running, champion full-forward Harry ‘Soapy’ Vallence destroyed the Magpies by slotting eleven goals - many of them created by Martyn’s domination across the centre line. That confidence-boosting victory set up the first-ever Blues-Tigers clash for the ultimate prize of a VFL Premiership.

Despite the harsh economic reality of the times (or perhaps because of it) almost 70,000 spectators packed into the MCG for the 1932 Grand Final, on a perfect cool and sunny Melbourne afternoon. Both sides were at near full-strength, and went hard at each other in a typical ferocious Grand Final opening. Richmond targeted Martyn and Vallence as Carlton’s key players, but both soaked up the pressure to feature strongly throughout.

Richmond led by 15 points at the main break, then Carlton mounted a charge to get within a kick at three-quarter time. The last stanza was a see-sawing battle of defences that eventually went Richmond’s way when a fumbled mark in the goal-square handed them a gift six-pointer. The final margin was nine points. ‘Soapy’ Vallence booted five goals for the Blues, while Martyn’s creativity and tireless running into space saw him named among his team’s best once more.

Colin Martyn hung his boots up for the last time after that one valiant attempt at Premiership glory. In the same way that he played his football, he appears to have slipped away from Carlton without fuss or fanfare, and was rarely seen around Princes Park in ensuing years. He remains among the least well-known of Carlton Football Club captains, but by any criteria, was richly deserving of the honour.

The Australasian July 20 1935, mentions that Colin Martyn is a football writer for the newspaper "The Star."