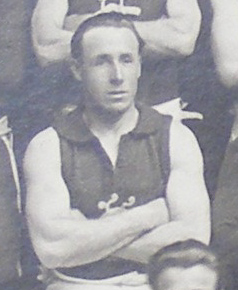 Martin was a Blue in 87 games of Aussie Rules footy, commencing in Season 1917. He kicked 15 goals in his time at Carlton, before injury forced his retirement after the Round 3 fixture of 1923.

Martin wore guernsey #25, he was born and recruited from Avenel.

During his time at the Blues, Martin provided great service in many positions on the ground. Initially he rucked in partnership with Harry Haughton before moving on to play roles as rover, half back, half forward and full back. The half back is where Martin settled where his dash, proficiency off both feet and agility proved effective.

Having initially moved to the city to join the Tramways Department, Martin was captain of the Brunswick team in the Tramways Football Association for six seasons for five premierships. This was a 'wednesday' league where industry worker could play football representing their company or branch. He also captained the Tramway United team in 1920. Martin was a keen wrestler as well as a runner winning numerous trophies and sashes.

"At a meeting of the committee of the Rosedale Club on Monday evening last, Mr. Martin, a former Carlton player, was appointed coach for the season at £8 per week. He is a player of exceptional merit and of good character." (same player?)
(Traralgon Record 18 April 1924 p3)