Carlton lost to South Melbourne by 5 points at the MCG.

This match was actually postponed for a week after a torrent of rain hit the MCG - the first time a finals game had been delayed in VFL history. When it was finally played on August 31st, over 35,000 people came to watch, the largest crowd since before World War I began.

South Melbourne came into the final as a warm favourite, after finishing on top of the ladder with only one 5-point loss during the season. Carlton was expected to give a good account of itself, however, and the game lived up to expectations. Scores were close all day, with South holding a narrow 7-point lead at the final break.

The Blues came at South Melbourne hard early in the last term, and actually managed to level the scores. South Melbourne then added 2 goals through O'Halloran and Doherty to Carlton's 1 behind. The Blues reduced the gap to 5 points through Furnell, and actually had chances to win the game late in the last quarter. Woolley had a shot from a tight angle, but kicked the ball out of bounds on the full. Another promising attack was defended by South Melbourne before the final siren sounded.

South would go on to win the Premiership, and be one of only four teams to have claimed the flag after losing only one game for the season - the others being Carlton in 1908, Collingwood in 1929, and Essendon in 1950 and 2000. Charlie Hammond retired for the final time after this game, having played in finals in every one of his ten seasons at Carlton (1905-1909 and 1914-1918). Carlton's coach Norman Clark crossed to Richmond for the 1919 season, and Viv Valentine replaced him.

South's ruckman Jack Howell (apart from being one of the best players for South in their 1918 Premiership) started a line that saw his son Jack Howell and grandson Scott Howell also win flags with the Blues. This is (so far) the only case of three generations of the same family being Premiership players.

Early in the season of 1907 the club introduced an all blue woolen guernsey. (See Guernsey History)
Some players decided not to change and kept wearing the canvas lace-up which was introduced back in 1890. On this day Viv Valentine played his116th and last game for the Blues. In the team photo below you can see Viv wearing his lace-up.
It is interesting to note that Valentine debuted in Round 2, 1911, four years after the guernsey change during the time of the 1910-1922 style monogram. So it seems that the club may have given players the choice of what guernsey to wear, or perhaps those few just found the lace-up more comfortable.
Of course not all future Carlton matches were photographed for the newspapers and very few images of the team exist for 1919. However, Blueseum believes this could have been the last time the old Carlton canvas and chamois lace-up jacket graced a football field.

Football has not had in four seasons - the period covering the war - such patronage as was accorded the second League semi final at the Melbourne ground on Saturday between South Melbourne and Carlton. It was an old time crowd in numbers and spirit. The panorama of faces actually stretched from the asphalted promenading spaces to the tree tops adjacent to the ground, for there ventursome boys, sharing the risks, peered through the thick foliage of giant tree growths, and anxiously followed scattered fragments of play. The stands were all comfortably filled. A great crowd it was. The sight of the serried rows of faces, the styles, the smiles, the moods, all indicative of the mind's pleasure or it's fickleness, was very impressive. They all seemed to herald back something that had been missing - the true football spirit. Yet, withal, while the clubs were in the heyday of their season's successes there was something conspicuously absent - the brand of the barracker. Roam as one would through the vast concourse of 36,000 people, hardly a score of colors could be seen. The voice betrayed one's partisanship, but nothing else. In pre-war days color designs provided attractions. Almost everybody disported a club token; the men had it in their hats, or their coat lapels, and the women, quite impartial in their range of "places," wore rosettes on their chic millinery, bijou blouses, and occasionally varied the color design of black on their stockings. Streamers then were as common as they are now on a head of the river day. But why the change? The war has bought its gloom, its sad memories and - its high prices. Ribbons cost money, and football, we all recognise from the teachings of a critical League, is a poor man's game. Beneath everything, however, is the concealed desire to temper the occasion with a due regard for those who are suffering from the grim realities of war. Thousands of patrons were present on Saturday who mourn the loss of a dear, brave son or relative. In passing, one might mention the death of young Elms, son of the great Southern defender, "Son" Elms, who was killed a week or so ago. It was only in this one respect that the semi final differed from those of past days.
The attendance, as before stated, was a record since the war. The taking were £1014 4/6, and the number present 35,855. On the previous Saturday when Collingwood played St.Kilda, 29,375 people attended, and the takings were £733 6/9. The gross receipts for the two semi-finals this year are £1746 11/3, compared to £705 7/9 in 1917 and £ ?11 10/9 in 1916. In the second semi-final in 1915, between Collingwood and Fitzroy, the return was £880 8/6: in 1916 Carlton v. Richmond, £226 17/; and in 1917 Collingwood v. South it was £379 8/6. The attendance was an evidence that "football is coming back to its own." The war cablegrams suggest that the battering arm of the Hun is losing its strength, and that with the combined efforts of old and new fighting forces including, one hopes, a fresh compliment from Australia, it will not be long before it is entirely shattered. Football then will be played with more zest and followed with general interest."
Leader September 07 p21. Note: Viv Valentine wearing the old canvas lace-up, probably the last player to wear one. Jack Woolley's jumper does not have a monogram.
Punch September 05
Blueseum has another photo of the 1918 team and Viv is wearing the mongrammed jumper, perhaps he wore the canvas jacket as it was his last game. 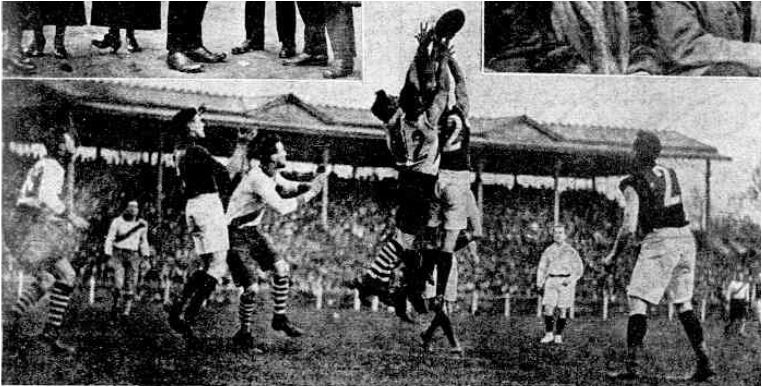 Percy Daykin No. 2 and Frank Wolley No.32 (number obscured but wearing a sleeveless guernsey, see team photo).
Possibly Harry Furnell No.1 (the only Carlton player with a single digit number wearing long sleeves) waiting at the back of the pack and umpire Norden
Image: Trove; Table Talk September 05