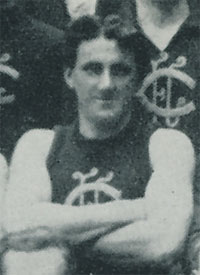 Henry Irwin ‘Harry’ Haughton was the type of footballer every coach relishes; an honest and versatile all-rounder with excellent skills, and unblinking commitment. He came to Carlton as a temporary bolster for the Blues’ following division, only to end up playing more than 100 games in a celebrated eight-year career. Appointed vice-captain in his second season, he represented Victoria, and was instrumental in Carlton’s 1914-15 Premiership double.

Haughton was born in New Zealand, but soon afterwards, his family migrated to Australia and Harry grew up playing our national game. Aged 26, he was an accomplished follower in outstanding form for Northcote in the VFA when Carlton recruited him in 1912. Immediately thrown in the deep end, he was asked to lead the Blues’ ruck in his debut match against Essendon at the East Melbourne Cricket Ground in round 10 of that year.

From that day on however, only injury or suspension kept Haughton out of Carlton’s senior side. With a game based around high marking, steely concentration and courage, he was equally at home in defence or attack. He experienced the thrill of finals football in his debut year, and made such an impression that he was selected in the Victorian state side in 1913 and 1914.

Harry’s career peaked in 1914, when he was impassable across half-back in Carlton’s 5-point upset Grand Final victory over South Melbourne. Twelve months later, he teamed with Charlie Hammond and Viv Valentine in the ruck, and brought the Blues consecutive flags with a stirring five-goal win over Collingwood.

Harry’s third opportunity for Premiership glory went begging in 1916, when Carlton started as favourite, but fell at the last hurdle against Fitzroy. After that, injury ruled him out of finals football in both 1917 and ’18. He was approaching his 34th birthday when he wore the navy blue for the last time, in the second Semi Final of 1919 against Collingwood. Playing at centre half-forward, he was persistent and brave all day as the Magpies for once proved too good, and knocked over Carlton by 18 points.

After finishing at Princes Park, Harry took up an offer to captain-coach VFA club Williamstown in 1920. However, after just one year in charge, he relinquished the responsibility of leadership to enjoy one last season on the field. And enjoy it he did, all the way to a glorious upset win over Footscray in the 1921 Grand Final at Fitzroy’s Brunswick St. Oval. Williamstown had battled through to the decider from fourth place on the ladder, while Footscray lost just once all season and were gunning for three flags in a row. But inspired by Haughton, who was a focal point all game at centre half-forward in his last match, Williamstown beat the Bulldogs by 18 points, and sent the big bloke into retirement in the best possible way.