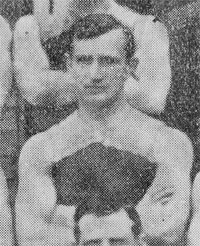 Thomas Gordon Ross, born in Chewton (near Castlemaine), was a tough and reliable defender who joined Carlton from Fitzroy shortly after the appointment of our foundation coach Jack Worrall in 1902. He had also played for Melbourne University. He rarely missed a match in his only two seasons at Princes Park, until his football career was prematurely ended by the demands of his medical studies at Melbourne University.

A decade later, in France during World War 1, Lieutenant-Colonel Gordon Ross of the Australian Army Medical Corps demonstrated exceptional leadership and bravery under fire, and was awarded one of the British Commonwealth’s highest awards for gallantry; the Distinguished Service Order.

Ross began his VFL career at Fitzroy in 1900, while studying medicine at Melbourne University. The Maroons were the power team of that era, having won consecutive flags in 1898 and 1899, so places in their senior side were difficult to get, and harder still to hold. Ross managed only four games in two seasons, then probably listened hard when former Fitzroy champion Jack Worrall suggested that there were more opportunities on offer in the team that he was about to assemble at Carlton.

In 1902 and 1903, while Worrall and the Blues began building toward the triple Premiership glory that was only a few years away, Gordon Ross became a stalwart in the Blues defence. Fitzroy may have handed him and his new team a six-goal hiding in his debut match, but Ross’s calm concentration and accurate kicking to position made it obvious that he was a valuable acquisition. Either in a back pocket, or on a flank, Gordon played 30 matches in his two seasons with Carlton, capped off by a brave effort in his last match - the 1903 Semi Final against Collingwood.

The Blues went into that game – our first-ever VFL final – as rank underdogs, only to lead the Magpies by 7 points at the last change in a dour, low-scoring struggle. Both sides hardly scored in the last quarter, but Collingwood’s 2.1 to Carlton’s 0.2 eventually got the Magpies home by 4 points. Carlton’s half-back line of Gordon Ross, Ernie Walton and Albert Trim were all included in the Blues’ five best players.

After completing his medical degree, Ross and his wife Florence later moved to Brisbane, where he set up a private practice, and became a Reserve officer with the Australian Army Medical Corps. When World War 1 began in August 1914, 36 year-old Captain Ross was working as a surgeon at Townsville Hospital. He immediately enlisted in the AIF, and by the middle of the following year had been promoted to Major. He underwent his baptism of fire with 12 Field Ambulance at Gallipoli, where the heroics of the stretcher bearers, doctors and other medical staff became an integral part of the Anzac legend.

It was also the place where a particularly virulent strain of influenza called Spanish ‘flu struck down hundreds of men on both sides. Major Ross was one of its victims. He was admitted to a field hospital in October 1915, and evacuated from the war zone soon afterward. He eventually recovered, but the after-effects of that serious illness were to plague him for many years.

After the brilliantly planned and executed evacuation of from Anzac Cove in December 1915, the Australian troops were rested and reinforced before being pitched into the stalemate of trench warfare in northern France. In February 1916, Ross was further promoted to Lieutenant Colonel, and given command of 12 Field Ambulance. But Gordon Ross was no staff officer. Despite his rank, he led his men into the thick of the action whenever the Australians went on the offensive – as he proved at the village of Warloy in August 1916, when he was awarded a DSO for courage and leadership under fire. The official recommendation for this honour reads as follows.

Lt Colonel Ross personally supervised the evacuation of wounded from 6 August 1916, to 15 August 1916 from the firing line to the main dressing stations at Warloy, all of which were carried out without a hitch. He was also responsible for the advanced dressing stations, collection posts, reinforcements to Battalion stretcher bearers etc. He was instrumental in advancing the Regimental Aid Posts on the right and the left about one thousand yards, which greatly facilitated the evacuation of the wounded, and altogether carried out the work in a most admirable manner.

After being further honoured by being Mentioned In Despatches by his Commander In Chief, General Sir Douglas Haig, only a few weeks after his exploits at Warloy, Gordon Ross was struck down again by illness in February, 1917. His previous bout of Spanish ‘flu had made his lungs susceptible to further infection, and severe bronchitis had set in. He was invalided to England for rest and recuperation, where it was eventually decided that he was unlikely to return to full fitness.

Therefore, as a volunteer non-combatant who had spent almost three years in front line duty, Lt Colonel Ross was offered, and accepted, an honourable discharge. He came home to Australia in August 1917, and returned to his private practice in Brisbane.

In 1939, when Australia was called to fight another war against the same enemy, Doctor Ross was practising in Sydney. He had maintained his links with the AAMC, and didn’t hesitate when he was asked to volunteer again. He was immediately restored to his former rank of Lieutenant Colonel, and commanded 104 Australian General Hospital at Bathurst, NSW from 1941 to 1944 – by which time he was 66 years old, and on the verge of retirement.

Along with another brilliant and courageous doctor/soldier in Harry Furnell, Gordon Ross ranks among the most highly decorated of all of Carlton’s sons. One of ten Blues honoured for bravery during World War 1, he passed away in August, 1952, at the age of 74.