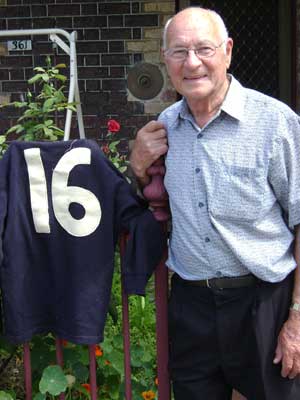 
Harvey Dunn Junior was the first VFL player recruited under the father-son rule, and therefore, the first to play a senior game. When this regulation was introduced in the early 1950’s, it came well before any form of draft, and gave League teams first option to recruit the sons of fathers who had played twenty or more senior games.

Harvey Dunn Senior had appeared in 71 matches for Carlton between 1924 and 1929. An elusive and dangerous small forward, he kicked 139 career goals. Dunn Junior was a similar type, only more of a specialist rover. While he had been born in Carlton, Harvey Jnr was living in Flemington in 1949 when North Melbourne claimed him as a resident of their zone, and insisted that he join their Under 19 squad. But Harvey was determined that he would only play at VFL level with the Blues, and so joined his father who was coaching at Box Hill, while the League thrashed out the details of a proposed father-son rule.

Eventually, the rule was adopted by the VFL, and Dunn Junior was welcomed to Princes Park in 1951. He went on to play nine senior matches for the Blues – seven of them as a reserve. He didn’t actually start on the ground in a senior match until round 14, 1953, but he made it a memorable occasion by kicking three goals in Carlton’s victory over Richmond at Princes Park.

Although his senior appearances were few, Harvey’s career at Carlton wasn’t without success. He was a very good contributor at seconds level, and was first rover in both the 1951 and 1953 Reserves Premiership teams. In ‘53 he kicked four goals in the Reserves Grand Final against Essendon, and vied with his team-mate Peter Webster for Best on Ground.

However, after sitting on the pine for most of Carlton’s round 13 game against Melbourne at the MCG in 1954 (lost by 35 points to the Demons) Harvey realised that perhaps there were greener and more rewarding pastures waiting back at Box Hill. He crossed back there later that same year, and gave the Mustangs some real bite around the packs. He won the club’s Best and Fairest in 1955, and played on until 1959.

Dunn 'Junior' prior to playing for Box Hill, had played football with Essendon Stars and Essendon Technical School.