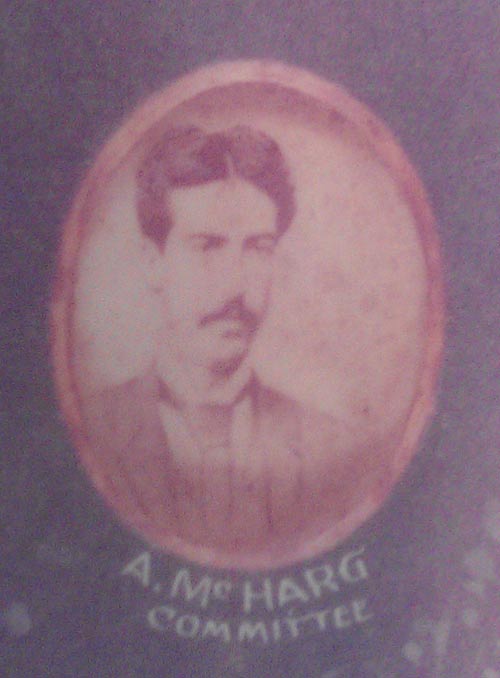 1864 McHarg was on the first committee of the Carlton Football Club.
A pioneer player in 1864.

1865 July 22
A. McHarg is named in the Carlton team squad to play the Warehousemen's club at St.Kilda Park.

1865 Kicked one Carlton's two goals on club's first visit to Williamstown in 1865.
.....trekking through West Melbourne swamplands, up a bush track to Saltwater River (Maribyrnong River).
They were punted across the river on a barge and then pushed through the scrublands to reach the 'Town football paddock.
(The History of The Carlton Football Club, Brian Hansen p.10,14)

1866 June 9
A. McHarg umpired the Challenge Cup game between Carlton and South Yarra at South Yarra. 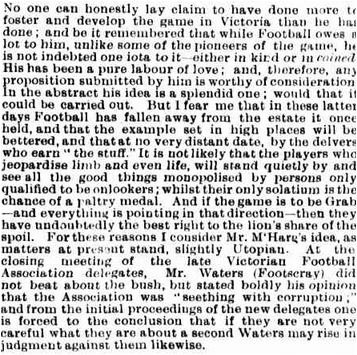 Trove; Melb Punch May 03 p11 1888
An interesting part of this article written by Carlton original player and administrator George F. Bowen aka "Olypmus," is the that he mentions the club played where the Carlton Orderly Rooms now (1888) stand, in the late fifties! Also the Carlton Orderly Rooms were in Grattan Street near the corner of Lygon Street, quite a distance from Royal Park where the club was first believed to have played.

Andrew McHarg was on the Carlton committee that decided on the team wearing Oxford Blue in 1871.
See: About Us- Index-Articles-How the Blues become Blue

1915 28 January Thursday
The 50th. Carlton AGM held at the Carlton ground where 5,000 members were present;
"Councillor Ivers, also in a reminiscent mood, pointed out that one of the original members, Mr. Andrew McHarg, was present. There were cries for the veteran, who modestly had seated himself amongst the general public. He declined the chairman's invitation to the platform, but the most enthusiastic outburst of the evening was that which he received on being recognised."
(The Referee, Sydney, ? 1915)