The Prince of Umpires 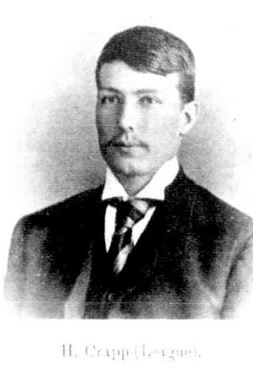 Essendon's 'Joker' Hall grew up with Harry Crapp in Carlton and said Harry lived at the corner of Madeline (now Swanston Street) and Queensberry Streets.
"He could not play football for nuts, so he started umpiring in the parklands."
(Sporting Globe May 31 1941)
Harry is a nickname for Henry.


How Crapp Was Called "Ivo"

.**"By the way, he was not christened "Ivo." Henry was his name. It is said his elder brother was nicknamed "Ivo" after the well-known English cricket captain, Ivo Bligh, and this was, later on, usurped by Harry. Crapp played for Carlton for only one season (1893), the whistle claiming him afterwards."
(Referee 30 January 1924 p13)


There is some confusion with the game entries for the brothers Crapp. Recent information points to Henry playing for Carlton for one season in 1893. He went onto become the most well known and best umpire in Australian football adjucating in both Victoria and Western Australia.

.**Henry 'Ivo' Crapp played with Carlton in the VFA between 1885 and 1890. He is listed as playing in the Carlton VFA side 10 times during 1890, his last year; the last time being in Round 12 (August 2, 1890) against South Melbourne at the MCG. The last 6 times during this season he was listed in the final squad of 23 players (with 20 player making up the side, the final 20 players is unknown).

.**In 1893, two brothers named Crapp also played for Carlton (a W and H. Crapp) but they were listed as brothers. Details are scarce but it would seem a high probability that both brothers were also related to 'Ivo'.
H. Crapp is most likely Henry 'Ivo' Crapp; see 1893 below. 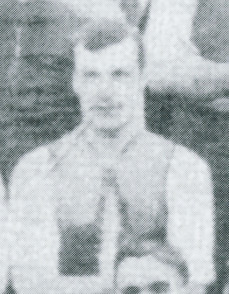 1924 January 21
Henry "Ivo " Crapp, the "Prince of Umpires," passed away at his home in West Perth aged 51 years.
He was survived by his wife and three children.

-*As he was 51 at the time of death in 1924, his birth would have been in 1873.
It seems highly unlikely he would have been playing at Carlton between 1885-1890.
The Sporting Judge newspaper carries a lot of information on junior football.
In it's August 27 1892 edition, it mentions "Ivo Crapp's high marking was much admired" this appears in a section where the newspaper has an article about a North Williamstown and Carlton Juniors match.
The following week, September 3 1892, the paper say of the Carlton Juniors and Albion United match, "Ivo Crapp surprised Albion United with his high marking."

To confuse matters there were possibly two players named Crapp with the initial W.
One debuted for Carlton in round one of 1885.

1893 Both William H. Crapp and Henry ('Ivo') Crapp were recruited from the Carlton Juniors in the V.J.F.A.

1893 April 08
The Sporting Judge newspaper says "Brody Crapp, (a brother to the great Ivo) will be seen this season in the ranks of the Ports."
Unless Brody is a middle name that was used as a first, then we believe there was no brother by that name.
There were five Crapp brothers, Thomas, James, William, Henry, and Edwin.

1893 May 6
The brothers William H. Crapp and Henry 'Ivo' Crapp, made their senior Carlton debuts in the opening round of the 1893 season against North Melbourne.
To confuse matters, William Henry Crapp was also nicknamed 'Ivo', see his page William H. Crapp for his death notice and his family members.
According to Ted Rowell (Collingwood) in the Sporting Globe June 19 1943, Henry only started using the name "Ivo" after his brother William had retired from football.

1893 After the Crapps made their debuts they were named in the team squads for next five rounds.
In rounds seven and eight only one Crapp was named.
Then their names not reappear again in 1893.

1894 April 17 Tuesday
H. Crapp was listed as one of the 20 umpires for this week's Victorian Junior Football Association round of matches.
He umpired all season with the V.J.F.A.
Another Crapp was a goal umpire in the V.F.A. this year.

1895 The AFL Umpire's Association web site says that Crapp began his (senior) umpiring career in 1895 with the VFA.
His first senior VFA match was on May 4 in the Fitzroy - Footscray match of round one.
The Argus said;
"Crapp, a brother of the old Carlton player, umpired the game, and is to be congratulated on his first essay with the seniors. He was cool, prompt, severe on sham little marks, and by throwing the ball well in, kept the play going."

1895 September 21
Crapp was the central umpire in the Port Melbourne - Richmond match at Port Oval.
The goal umpire in this game was another Crapp.

1918 October 25 Friday
The Western Mail (W.A.) has an article called "Ivo " Crapp - Umpire. A Unique Record.
It says Harry (?) Crapp was called "Ivo" after his elder brother whose "Ivo" nickname was from the famous English cricket captain Ivo Bligh.
It says he only played one season for Carlton in 1893 before taking up umpiring.
To read the article click here> http://nla.gov.au/nla.news-article37602728

1925 March 03
Western Argus.
Perth, March 01
A memorial has been erected at Karrakatta cemetery to the late Ivo Crapp, the well known umpire, by the W.A. Football League.
The memorial* was formerly unveiled today in the presence of numerous sporting representatives.
.*August 2016, this writer made a quick search at the cemetery and failed to find the grave or the memorial/headstone.
(Karrakatta - Anglican section BA plot 0027A)

1937 August 08
Sunday Times (Perth) mentions Ivo Crapp and the confusion arising from his name in their story;


"Footballers Of Other Days"

1946 December 24
"Death of Ivo Crapp, Football Umpire."
The Argus published a report of the death of William Henry (Ivo) Crapp on December 22.
This is obviously a mistake and is most likely his elder brother.
To read click here> http://nla.gov.au/nla.news-article22390170
The family death notice mentions brothers Thomas, James, Henry (all deceased) and Edwin.