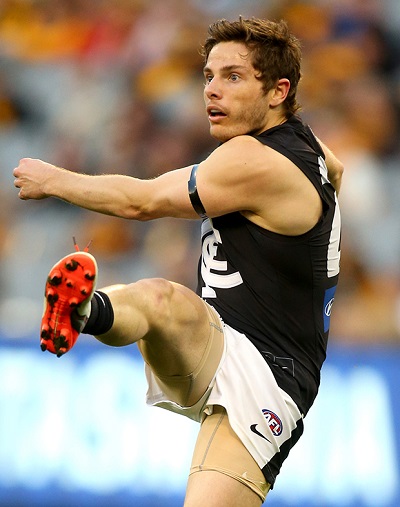 Carlton recruited Jason Tutt with the only pick the club used in the 2014 pre-season draft, after the speedy small utility had parted ways with the Western Bulldogs. Originally from Canberra, Tutt had emerged from a varied and successful junior sporting career to play 26 games over five seasons at the Whitten Oval, but was convinced that he needed a change and agreed to terms with the Blues.

During his teenage years, Tutt represented Australia as a pitcher in the Under 19 World Fastpitch Softball Championships. He also played Rugby Union before embracing Australian Rules at the Tuggeranong and Ainslie Football Clubs. After registering for the 2009 AFL Draft, he was selected at number 31 by the Bulldogs and made a remarkable senior debut by kicking goals with each of his first three kicks against Port Adelaide in round 22, 2011.

By late 2014 however, Tutt was regularly being used as the team’s substitute. He felt he had more to offer than that, so after being part of Footscray’s emphatic victory over Hawthorn in that season’s VFL Grand Final, he became a delisted free agent when he declined the Bulldogs’ offer of a new contract. Instead he crossed to Carlton, saying; “Everything I need to improve my football is right here, and it’s tangible. It’s just a really great environment in which to learn, and it’s a good fit for me in moving forward with my footy.” While establishing himself a Princes Park, Jason continued studying toward a Bachelor of Applied Science degree in Physical Education at Victoria University.

Tutt’s weapons on the field were electrifying pace and excellent endurance. He could roost the football a long way, although his kicking accuracy, and his consistency, sometimes let him down. Still he knuckled down and played his first game for his new club from the interchange bench at Subiaco Oval, WA in round 2, 2015, when the Blues were smashed by the West Coast Eagles at the start of one of the worst seasons in the history of the club. He kicked his first goal in navy blue against Geelong in round 8 – a week before Malthouse was sacked and replaced by his assistant, John Barker in a caretaker role. Eight more appearances in guernsey number 22 followed during the second half of the season, and he wound up his debut year as a Bluebagger with 13 matches and four goals to his credit.

However, the appointment of Brendon Bolton as Carlton’s new senior coach in 2016 brought a new approach across the board at Princes Park, and new standards were set. Despite some strong efforts at VFL level with the Northern Blues, Tutt played just one senior game all year, in round 14 against GWS at the Sydney Showgrounds, and in October he was told that his contract wouldn’t be renewed.

Tutt joined VAFA team De La Salle for the 2017 season, he will he' play for their "old boys" team, he has also taken up the role as a mentor for the school's promising talent that plays in the TAC Cup and help them get ready for a possible AFL career.