Champion Chris Judd's career ended as Carlton fell to the Adelaide Crows by 9 points at the MCG.

Twenty-three minutes into the first quarter of this fateful round 10 match against the Adelaide Crows at the MCG, Carlton’s season from hell plunged to new depths when champion midfielder Chris Judd crashed to the turf with a season-ending knee injury. The Blues fought hard from that point on and actually hit the front early in the last quarter, but Adelaide steadied and kicked two late goals to win by nine points.

Although it ended in another defeat, John Barker’s second game as Carlton’s caretaker coach saw the Blues play with a passion and intensity that had been painfully absent for much of the season. Matthew Kreuzer’s return from a long layoff through injury provided real excitement for the club’s disheartened supporters, while captain Marc Murphy bounced back to something like his best form. And once again, Pat Cripps showed poise and maturity beyond his years. 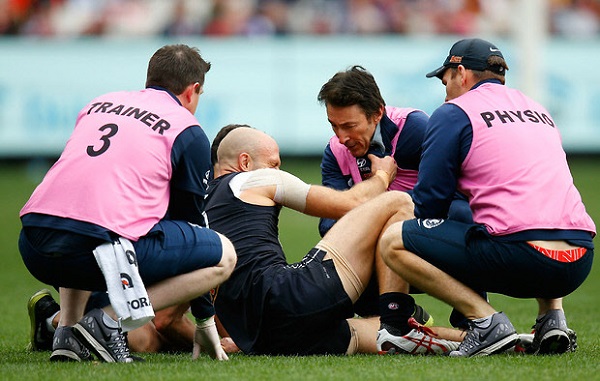 Coming off four heavy defeats in succession, as well as the recent sacking of third-year coach Mick Malthouse, Carlton took on the Crows having made three changes to the team soundly beaten by Sydney the previous week. Dale Thomas (injured), Liam Jones and Chris Yarran made way for the return of Kreuzer, Judd and Murphy in a strengthened and better balanced Blues combination. Jason Tutt was designated as Carlton’s substitute, and the Blues lined up with Lachie Henderson and Levi Casboult in attack. Andrew Walker and Kade Simpson (wearing long sleeves) were at half back, with Zach Tuohy shadowing the Crows’ brilliant small forward Eddie Betts.

A slick Chris Judd handpass provided the opening goal of the game to Cripps, and the Blues burst away to lead by 18 points after 12 dominant minutes. Adelaide struck back with the next three majors and scores were level when a high ball came arcing toward Judd and his opponent Patrick Dangerfield on centre wing. Judd cleverly out-marked the star Crow, but as he landed, his left knee buckled inward, and he tumbled to the ground in obvious pain. A hush of disbelief settled over the stadium, followed by a swelling ovation from all sections of the crowd as the champion left the field. Tutt ran on the ground much earlier than expected, and Adelaide seemed to be getting on top before Casboult kicked a lovely set-shot goal from the left forward pocket on the verge of quarter-time to keep the Blues right in contention.

Adelaide began the second term with renewed tenacity, stretching their advantage to four goals before Carlton replied through Tuohy, who ventured forward and kicked one of his trademark long bombs. Without his customary tag, Murphy was gathering kicks at will, while Henderson began finding space and leading well up the ground. Carlton soaked up everything that the Crows threw at them in the quarter, and at half-time, trailed by 19 points.

The third term was the best of the match, as Carlton seized the initiative and outscored their visitors by 5.1 to 2.4. Highlights for the home crowd came with Kreuzer’s two big grabs for vital goals, Murphy, Cripps, and Tom Bell’s endeavour in the packs, and a lucky mark in front of goal paid to Casboult shortly before the three-quarter time siren. The big unit kicked truly, and with 30 minutes remaining, Carlton was just four points adrift.

Casboult could have put the Blues in front inside the first minute of the last quarter, but his set shot from wide out drifted off-line. Tutt then inspired his team with a goal-saving tackle, before Sam Docherty kicked long again to Casboult, who plucked another strong mark 30 metres out. This time, Levi’s kick was true, and the Blues led by 4 points. From that point on however, Carlton’s intensity seemed to falter, and when Betts managed to briefly shake himself free of Tuohy and kick his only major of the match at the 13-minute mark, the Crows were back in front by 8. Dennis Armfield and Nick Graham’s running goals kept the deficit to just three points, but when Cripps limped off with what looked like a hamstring strain after 20 minutes of play, the Blues looked spent. Two late majors to Adelaide’s Josh Jenkins – who had posed a constant threat all match, and finished with five goals – iced the game for the Crows, with a final margin of 9 points.

Despite the loss of their champion, Carlton just may have taken the first steps on a long road to recovery in this game. Even so, coach Barker put things in perspective afterwards when he said, "We fought it out, gave a really strong effort and pressured well. But what we want is that effort to be standard. We don't want to be praising that and making a massive deal of it, because it hasn't been there. That effort needs to be the standard going forward and we shouldn't be applauding it too greatly."