The Blues went down swinging against Collingwood at the MCG.

Six minutes into the last quarter of this Saturday afternoon match against Collingwood at the MCG, Levi Casboult took a strong mark inside Carlton’s forward 50 arc, and kicked truly to cut the Magpies’ advantage to just three points. Suddenly, after ninety minutes of scrappy, intense football, the Blues were poised for an upset. But it wasn’t to be, and Collingwood’s superior accuracy in front of goal got them home in a high-scoring final term.

A decade or so previously, this game would have packed out the MCG. In 2015 however, Collingwood had been winless for six weeks and Carlton remained in line for another wooden spoon, so the vast ground was half empty when the teams took to the field. Carlton’s match committee had made another three changes during the week, dropping Chris Yarran, Troy Menzel and Jason Tutt for Andrew Walker, Nick Holman and Mark Whiley – the latter named as the Blues’ substitute. Carlton coach John Barker had publicly promised more intensity from his team in this game, and right from the opening bounce, his team delivered. 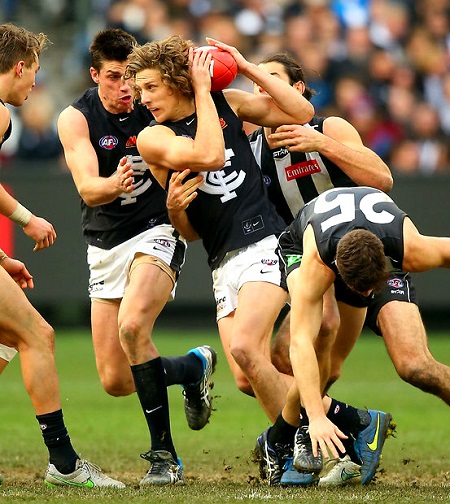 Levi Casboult drew first blood when he hauled down one of his big pack marks and kicked truly. Tom Bell could have added another two in quick succession, only to miss both, and the rest of the quarter was an arm wrestle. Although both sides were sloppy with their disposal, it was hard, engrossing football. Collingwood led by six points at the first break, with their captain Scott Pendlebury having already racked up an amazing 14 possessions.

Andrejs Everitt inspired the Blues early in the second quarter when he smothered his opponent’s clearing kick and skidded the ball through for a great goal from a tight angle. The tussle for supremacy around the ball-ups and centre bounces was intriguing at this time, with Pendlebury and Dane Swan for Collingwood up against Marc Murphy and Patrick Cripps of Carlton. Cripps in particular was showing the poise and surety of a veteran in just his 19th senior game. Approaching half-time, Everitt outsmarted his opponent and kicked his second goal for the quarter, only for Collingwood’s dangerous small forward Fasolo to reply right on the siren. At half-time, the black and whites had stretched their advantage to 16 points.

Collingwood slammed through two quick majors when play resumed in the third quarter, and after six minutes of contested football they led by 29 points. Another belting for the Blues was on the cards, but this time Carlton didn’t fold. Murphy lifted his team with a determined individual goal, while the Blues’ defenders (particularly Kade Simpson and Michael Jamison) built a wall across half-back. Meanwhile, Whiley had been called into the game – replacing Cameron Wood – and the youngster’s enthusiasm for the contest was infectious. Just before the three-quarter time siren, Everitt drilled his third major to get the Blues back to within 15 points, and it was game on again.

Two minutes into the final term, Everitt kicked his fourth major, and when Casboult followed up almost immediately, the Magpie Army began to sweat. The difference was then three points, and one final push might have brought the Collingwood castle crashing down, until the Blues began to lose their composure. A 50-metre penalty against Dylan Buckley, and an obvious throw in the goal square both brought gift goals to Collingwood, as they kicked seven majors straight (to Carlton’s 6.3) and won by 18 points.

Despite another defeat – which dropped Carlton to second last on the ladder, ahead of a tough assignment against last-placed Brisbane at the Gabba in round 20 – this game will be remembered for Pat Cripps and Marc Murphy’s prolific efforts in Carlton’s midfield. Although physically battered yet again, “Murph” collected 36 disposals, 9 inside-50 entries and two goals, while Cripps was credited with 35 disposals, 11 clearances and seven inside-50s. Others who shone in a much-improved effort by the Blues were Everitt, Simpson, Jamison and Matthew Kreuzer.