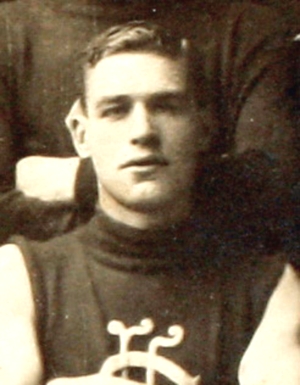 Recruited from nearby Brunswick Juniors, Mortimer Patrick Keily was a versatile defender who gave the Carlton Football Club loyal service throughout the dark years of World War 1. His story is remarkable in that his first and last matches both resulted in draws, and the fact that he was the victim of one of the most draconian penalties in the history of the game, when he was suspended for almost two full seasons for abusing a VFL match official.

Keily started at Carlton in 1914, as a strapping 21 year-old who had already spent a number of years working on the docks at Port Melbourne. Wharf labourers were classified as reserved workers – essential to the war effort - and therefore were discouraged from enlisting in the armed forces. Mort was to spend his entire working life on the waterfront, becoming a foreman and long-standing trade union activist before eventually retiring at the age of 70.

Back in 1914 however, he had been assigned to a back pocket on debut against Collingwood for the first game of the season at Victoria Park. In a willing contest, the Blues were clearly the better team for most of that match, but some atrocious kicking for goal allowed the home side to escape with a draw. Later on in September, Carlton beat South Melbourne in a tough Grand Final, then made it two Premierships on the trot by hammering Collingwood by 33 points in the 1915 decider. Mort wasn’t able to gain a place in either of those Premiership teams, but still did enough to show that he was worth persevering with.

Eventually, Keily’s first chance at September glory came in 1916, when he played on a wing throughout Carlton’s finals campaign. The Blues had dominated the home and away season, however the loss of key players during the finals crippled the team, and Fitzroy snatched the flag by five goals in a Grand Final boilover.

In 1917, the VFL appointed stewards to all senior matches in response to increasing on-field violence. These officials were sent to each game, and told to report players seen committing foul play. When Carlton met Fitzroy in that year’s Semi Final, the steward in attendance was a Mr E. Hough - and one of three players he reported was Mort Keily, whom he accused of “abusive language towards a steward.”

After the VFL considered the charges, one can only imagine the reaction of Keily (and his club) when they were informed that he was suspended from playing for a whopping 24 weeks – or all but two full seasons! There was no appeal process, and Mort would surely have been forgiven if he had quit the game - but he didn’t. He stuck around to serve out his penalty, and when his younger brother Jack joined Carlton in 1918, Mort insisted that Jack wear his number 8 guernsey in his absence.

Keily finally made it back onto the field for Carlton in August 1919, wearing jumper number 4 at full-back in a 16-point win over St Kilda at Princes Park. Almost a year later – in another home match against Melbourne in round 6, 1920 – he gleefully kicked his first and only VFL career goal.

Mort managed only five more games after that, and retired after a desperately hard-fought draw with South Melbourne in May, 1921. On that cool, dry Saturday afternoon at the Lake Oval, Keily finished off his VFL career at half-forward, playing alongside a future Carlton champion in Horrie Clover.

Later, Mort had a brief run with Williamstown in the VFA - only to call it quits after breaking his leg in the opening round of 1922. Married by then and with two sons to raise, Mort settled back into life on the waterfront. Having endured the Depression years of the 1930’s, and a second World War in 1939-45, he passed away at the age of 75 on June 28, 1967.

"Haughton, Dick and Kiely, of the Carlton team, endeavored to enlist, but were rejected. It is not generally known that both Dick and Kiely have each lost an eye through accidents in their school days. Of course, this defect was the cause of their rejection by military authorities."
(The Winner May 10 p8)
(Kiely/Keily)