Despite a scoreless third quarter the Blues held on for a gutsy 6 point win over South Melbourne at the MCG to claim their 4th flag.

Carlton dropped Stan McKenzie and Frank Triplett from the Preliminary Final side and brought in Alf Baud and George Calwell for the Grand Final. South Melbourne started with the advantage of a breeze in the first quarter, but the foundation of a solid half-time lead was set up by the Blues, who trailed by only 2 points at the first break. Carlton then made good use of the breeze, kicking three goals while holding South Melbourne goalless. This left Carlton with a handy 21 point lead at half time in a low scoring match. 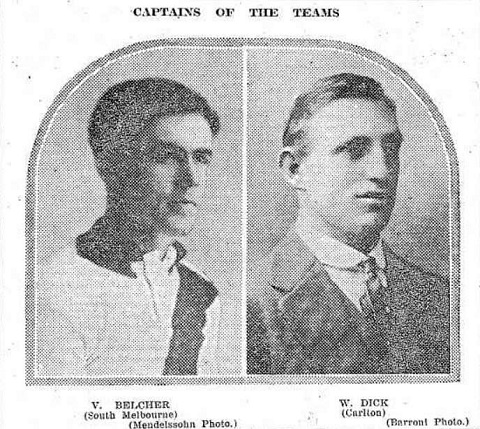 In the third term South Melbourne managed to hold Carlton scoreless, but wasteful kicking (1 goal and 6 points) saw them nine points behind at the last break. To their credit, South Melbourne fought hard in the last quarter to make the game a contest, and trailed by only one straight kick late into the term. It was then, South supporters claimed, that Carlton's Jamieson jumped into the back of South forward, Tom Bollard, deep in the goal square. If a free kick had been awarded, a goal was a near certainty, and the game would have ended as the first drawn final in VFL history. No free came, however, and the Blues cleared the ball from the backline and went on to win the club's fourth VFL Premiership by just six points.

Carlton set a VFL record in the match for having 9 first-year players in their Premiership team, eclipsing the previous record of 7 set by Collingwood in 1902Tragically, two members of South Melbourne's Grand Final team; Bruce Sloss (rated by some as Best on Ground) and Jack Freeman, were later killed in World War I.

Carlton win third Jubilee Flag, despite mid-year Blues
Despite Carlton's annual upheaval where the President and other office-bearers were replaced mid-season, the Blues have completed a hat-trick of 'Jubilee Premierships', beating South Melbourne by six points, 50 years after the foundation of the club in 1864. Carlton also won in 1908, the Jubilee of Australian football, and in 1887, Jubilee of Queen Victoria. Half the Carlton premiership side were first year players. The preoccupation with the war did much to keep the crowd down to 30,495, half that of last year. Like many sporting teams, Carlton are somewhat superstitious, and took strange steps when they lost the toss for the use of the dressing rooms. Rather than use the gymnasium, and unable to use the dressing room near the skittle alley, they changed in the cricket room under the Grey Smith stand - to good effect. The game was a contest between the speed of South Melbourne and the weight of Carlton. John Worrall in the Australasian had written: 'Taking him all round, the footballer is not a thinking animal, if so, he would recognise that the possession of dash is not to enable a man to run from one end of the ground to the other, but to give him first handling of the ball, and then to use his brains'. South did not observe this football fact, and despite a splendid fightback, fell short and kicked badly under the weight of Carlton's sterling defence. Blues defender and captain William Dick was best on the ground. - 100 Years of Australian Rules Football.

THE GRAND FINAL - WON BY CARLTON

CARLTON - Are Football Premiers of Victoria for 1914