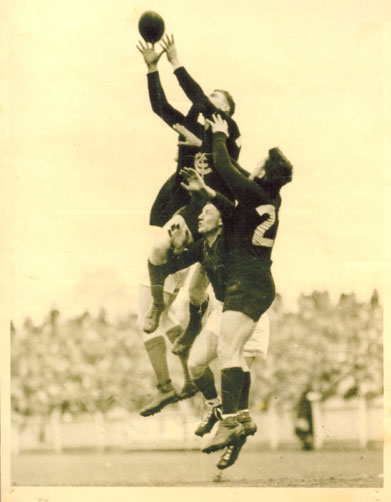 
A tall, well-credentialled ruckman-forward from Launceston, Tasmania, Pat Farrelly played seven games and booted seven goals in his one season at Carlton in 1937. The following year he was 'swapped' to South Melbourne for Brighton Diggins, who stood out of football for twelve months before becoming Carlton's captain-coach, and leading the Blues to the 1938 Premiership.

Somewhat ironically, Farrelly made his senior debut for Carlton against South Melbourne at the Lakeside Oval in round 12, 1937. Playing in the ruck and resting at full-forward, he booted two of the Blues' seven goals for the match. His best return of four majors came a fortnight later, in Carlton's round 14 victory over Melbourne at Princes Park.

Farrelly was cleared to South Melbourne in 1938. The Swans used him almost exclusively as a tap ruckman, so he added just one more goal to his career tally. In 1939 he moved on to VFA club Camberwell for greater reward, and played there until he enlisted in the Australian Army in 1941. Throughout World War II, Farrelly served on home soil as a signaller.

He returned home safely, and later found work on the Melbourne waterfront through his former Carlton team-mate and close friend, Jim Francis. A long and peaceful life ensued, until August 6, 2007, when Patrick Stanley Farrelly passed away at the age of 94.

For more information on the life and career of Farrelly, please click here to read his tribute from the Carlton Football Club, accessible through the Blueseum.