Adrian Whitehead's Rising Star nomination, and Matt Clape's 7 goals were the icing on the cake as Carlton skittled the Adelaide Crows by 33 points at Princes Park. 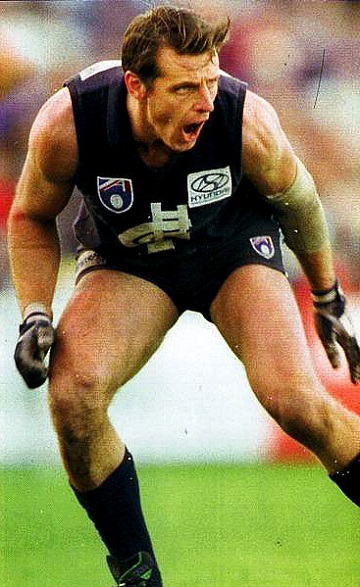 Carlton deserved this win over the mid-ranked Crows, on the back of outstanding individual performances from Anthony Koutoufides (22 possessions and 9 marks) and Matt Clape who kicked 7 goals from the forward pocket and flank - a feat only matched since by Brendan Fevola in 2004. On this day, Clape could do no wrong, continually finding himself at the right spot at the right time, as the Blues pulled away to win decisively.

Adelaide had got out to a 29 point lead during the third quarter. They had dominated the game since half way through the first quarter. The Blues were missing Brad Pearce's speed and marking on the forward line after he was carried off in the second term, the result of being shirt-fronted. Pearce did return to the bench later in the game, but not to the field. Nearly five goals in arrears, Stephen Silvagni was moved to the forward line and immediately made his presence felt by providing a mobile target. Stephen Kernahan who hadn't been sighted in the first half, slowly worked his way into the game. Getting on top of their opponents, Craig Bradley, Greg Williams and Anthony Koutoufides kept driving the Blues forward. In a remarkable transformation, Carlton then slammed on nine unanswered goals, eight in the last 15 minutes of the third term. The Blues won easily in the finish with a 62 point turnaround. Special mention to Scott Camporeale, a first year player who plays with skill and tenacity, and keeps a cool head when under pressure.

200 Games : Peter Dean
Debut : Ben Harrison, who would play 2 games (rounds 15 and 16, 1995) with the Blues, before becoming better known as a trusty defender for the Western Bulldogs, via Richmond. Taking a mark at centre half forward at the Lygon Street end, Ben narrowly missed kicking a goal with his first kick in League football.
AFL Rising Star Nominee : Adrian Whitehead