1995 Premiership player and Rising Star, whose career was wrecked by injury. 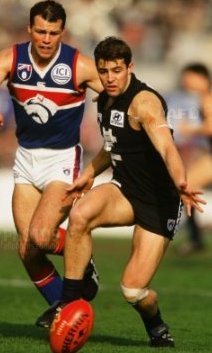 In a familiar story of sporting triumph and tragedy, Adrian Whitehead seemed destined for stardom when he was the youngest member of Carlton’s all-conquering 1995 Premiership team. Blessed with pace, sure hands and elite kicking skills off both feet, he was one of the game's most exciting prospects, until his career was derailed by a serious foot injury in just his third season.

After Carlton had been soundly beaten by Essendon in the ‘93 Grand Final, commentators predicted that certain big names on the Blues’ player list had reached their use-by date. However, no-one at Princes Park was listening - even after losses in the first two matches of 1994. Ahead of the round three clash against Geelong at Princes Park, the match committee called up 18 year-old Adrian Whitehead from Wodonga for his senior debut on a wing - alongside Greg Williams in the centre, and Mil Hanna on the opposite wing. To the joy of Carlton fans, Whitehead could hardly have been more impressive. Showing a maturity beyond his years, the youngster in guernsey number 32 was cool, precise and very effective as he racked up 26 possessions, and Carlton beat the Cats by five goals. Another seven appearances followed for Adrian in that first season, concluding with the Blues’ 1994 Qualifying Final loss to Melbourne.

When Carlton beat Collingwood by five goals in round one of 1995 in front 86,000 spectators at the MCG, Whitehead played in a back pocket in a significant positional move by coach David Parkin. Adrian and champion full-back Stephen Silvagni clicked as a combination almost straight away, and the Blues embarked on one of the most dominant seasons in VFL/AFL history. After losing two early games, the Blueboys strung together a fabulous 16-match winning streak that culminated in that crushing Grand Final victory over Geelong. Whitehead was one of nine Blues who didn’t miss a match all year, and as his confidence grew, he evolved into a creative defender who regularly launched attacks from deep in defence. On the way to the Grand Final, he was outstanding in Carlton’s victory over the Adelaide Crows in round 15, earning an AFL Rising Star nomination.

Then, during 1996 pre-season training, Adrian began experiencing foot pain that was a portent of the anguish ahead. Although he managed 16 matches and 6 goals playing in a variety of roles, the sparkle of the previous season was dimmed somewhat as Carlton finished fifth, only to crash out of finals contention with successive losses to looming interstate power clubs West Coast and Brisbane.

In 1997, Whitehead reclaimed something like his best form in the early part of the season as Blues’ supporters looked for encouragement in the wake of the retirement of champions Stephen Kernahan, 'Diesel' Williams and Justin Madden – all of whom proved irreplaceable. Carlton struggled throughout the year, and were on the way to another heavy defeat against Geelong in round 20 when Whitehead hobbled off the ground in obvious distress. After treatment he returned to the field, but a post-match examination revealed serious damage to the tendons in his troublesome foot.

Therefore, Adrian didn’t play at all in 1998, instead undergoing a series of delicate operations. Late in the year he was back on his feet, but another season had begun by the time the club welcomed him back to training. Eventually, he was named on the bench for round 13, 1999, against North Melbourne at the MCG. In the aftermath of another heavy defeat, Adrian decided that it was futile to continue, and told the club that he wished to retire immediately.

After returning home to Wodongs and accepting an offer to coach the local Wodonga Raiders in the Ovens and Murray League, Whitehead made headlines in the football press again in 2001 when he sued Carlton for damages he claimed were caused by a pain-killing injection administered by the club doctor in that fateful game at Kardinia Park four years earlier. The writ alleged that the injection prevented him from protecting his foot during the game, and that exacerbated the damage.

As those legal proceedings took their course, Whitehead coached Yarra Glen to the 2001 Yarra Valley and Mountain District Football League Premiership, which led to his appointment as an assistant coach at VFA front-runners Port Melbourne in 2002. He then moved on to coach Eastern Football League team Donvale, before taking a break from football to pursue his business interests.

In July 2005, Justice David Byrne of the Supreme Court ruled that Whitehead was entitled to compensation, but not directly from the Carlton Football Club. Instead, he advised that as a former employee of the club, Whitehead could pursue a settlement through the Workers Compensation Act. All subsequent matters in the case were not made public.

More than a decade later in 2016, Whitehead returned to the coaches box again, when he signed at two-year contract at Hume Football League club Holbrook.