Sectional Round 2: Carlton defeated Essendon by 31 points at Princes Park - the first of 15 consecutive wins for the club.

Perhaps still smarting from the previous week’s loss to South Melbourne – and the suspension of two key players in Fred Elliott and Jim Marchbank – the Blues knuckled down to the task of beating Essendon for a third time in this season, and emerged as winners by five goals at Princes Park.

Prior to the game, Carlton coach Jack Worrall was forced to make five changes through a combination of suspension and injury. However the loss of Elliott, Marchbank, Topping, Gardiner and Jinks was covered by the inclusion of Grace, Kennedy, Snell, Beck and Williams in a stark reminder of the depth and quality of Carlton’s playing list.

The first three quarters of this skilful, even contest had the big crowd enthralled, with only two points between the sides at three-quarter time. But roused by Worrall’s address, Carlton asserted their authority in the final term and drew away to another emphatic victory.

Meanwhile, across Nicholson St at Victoria Park, Collingwood suffered their second defeat in as many weeks when they were beaten by Fitzroy. In the first week of the Sectionals (round 15) they had fallen to St Kilda, and this loss to the Maroons had given them the staggers. Although still certain to play in the finals, the Magpies had tumbled from second to fourth in a fortnight.

At the end of this round Carlton were in 1st spot on the ladder with a percentage of 154.7. 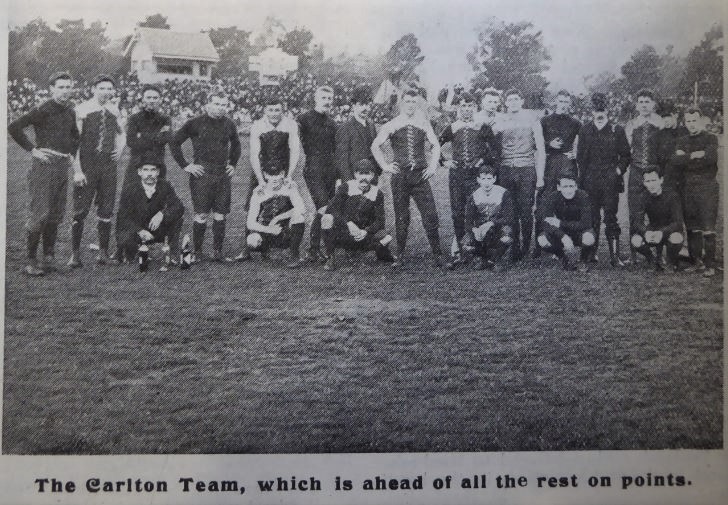 Possibly, L-R standing; Ted Kennedy, Doug Gillespie, unknown, Norm Clark fourth from left, Billy Payne, Frank Caine, official, Frank H Williams, unknown, "Mallee" Johnson at rear, unknown, Les Beck two to the right of Johnson, official, Alex Lang, official, George Bruce far right.
Front; trainer, Jim Kennedy, Mick Grace, Charlie Hammond, unknown, Rod McGregor.
Note: The newly built press box received complaints from journalists because of its position. The building was on the northern side, half back/back pocket, you can see the Lygon St. end behind post on the far right. The press box was relocated to the northern wing next to the clubrooms for the next season, 1908.
We have images of all of these players. Can anyone help with the naming of them?
Image: SLV, Illustrated Sporting and Dramatic News (Melb) August 29 (p14) 1907

The three Carlton followers (Hammond, Johnson and McGregor) all played their 50th match for the Blues in this game.

50 Games: Charlie Hammond, George Johnson and Rod McGregor
Last Game (Carlton): Archie Snell
Winning streaks: This would be the first of 15 wins in a row, a record winning streak for the Blues. Eventually, the record would stand for almost 90 years, until 1995.