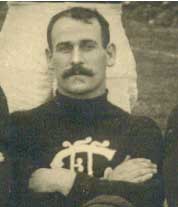 This is a story of two men - both giants in their chosen profession - who shared an unusual nickname and a reputation as exceptional leaders. The first was Fred ‘Pompey’ Elliott, who came to Princes Park in 1900 after one largely undistinguished twelve-game season with Melbourne. Although just 177 cm tall, Fred was a well-proportioned athlete with good endurance and an impressive spring. But it wasn’t until two years later, when Carlton appointed Jack Worrall as our first full-time secretary-manager, that 'Pompey' Elliott’s football potential was properly realised.

To all intents and purposes, Worrall had become the game’s first professional coach. He insisted on being solely responsible for training, recruiting and coaching the team, and set about moulding the Blues into his vision of a cohesive unit. And in Pompey he found an enthusiastic ally. Despite an often tempestuous relationship with various Carlton administrators and indeed, his own players, the appointment of Worrall transformed the Carlton Football Club from a chopping block for other teams into the first genuine power club.

The Blues swept into our first VFL final series in 1903, our first Grand Final in 1904, and three glorious, emphatic Premierships in a row in 1906, 1907, and 1908. In the records of these fabled games, Pompey Elliott’s name invariably appears among those most influential in the result. He was a superb big match player and an instinctive on-field leader; much in the style of another champion in a later era in Ron Barassi. Pompey was always prepared to place himself where the battle was at its fiercest - which probably explains why he suffered the enormous disappointment of missing the 1907 Premiership triumph through suspension.*

Following a bitterly-fought 17 point loss to South Melbourne late in 1907, the Carlton committee – as it was entitled to do at the time – cited South’s Bert Franks for striking several Carlton players during the game. South retaliated by charging three Blues - including Elliott - who was found guilty and suspended for the rest of the year. There was some compensation however, when Fred was appointed captain of Carlton in 1908 and promptly led the team to our third successive Premiership victory, this time over Essendon.

Jack Worrall’s stormy yet successful reign as coach of Carlton ended mid-way through the 1909 season, and Elliott replaced him as captain-coach. Despite the disruption, Fred steered his team into their fourth successive Grand Final against South Melbourne, and they went agonisingly close to snatching an unlikely victory. South prevailed by just two points in another nail-biting defeat for the Blues. When Pompey retired after the 1911 season, he pulled down the curtain on a truly magnificent career. The first player to appear in 200 VFL games, he was elected to the Carlton Hall of Fame in 1988. In appreciation of Elliott's efforts, the club held a "complimentary picture and musical performance" for his benefit at the Jubilee Theatre in Carlton that year.

The second of the two men mentioned above was Brigadier General Harold Edward ‘Pompey’ Elliott, who was given his nickname after the Carlton legend, and was one of Australia’s greatest military figures of the First World War. Elliott led the Australian 7th Battalion in the Anzac landing at Gallipoli, and later earned fame as commander of an Australian Brigade on the Western Front.

Author Ross McMullin wrote of Harold Elliott: ‘(He) was a brilliant tactician as well as a fierce fighter. For any private soldier, it’s pretty important to have faith in your superior’s competence. If you’re putting your life on the line, you obviously want to feel that you’re being competently led while you’re doing it. Pompey’s men had that faith, which stemmed from the way he treated his responsibilities with passionate seriousness—they knew that he knew his stuff.’

No doubt these words could be equally applied to both men.

After crossing over from Melbourne (where he had played 12 games) for the 1900 season Fred ‘Pompey’ Elliott played 34 games for Carlton to the end of the 1901 season, then played for North Fremantle in Western Australia before returning to Carlton in 1903.


.* "The two disqualified Carlton men, F. Elliott, the captain, and J. Marchbank, were presented with testamonials by the Carlton committee and players on Saturday night. (14 Sept.) Accompanying the presents were addresses embossed on silk as follows;
The committee and players of the Carlton F. C. desire to express their sympathy in what they consider the unjust disqualification imposed upon you by the League. We trust that such unjust treatment will not deter you from again displaying your skill as a footballer with the Carlton club."
"This is a smack at the investigation Committee of the League. The spirit in which games subesquent to the disqualifications have been contested has undoubtedly improved."
(Referee, September 18, p9)

"It is to be sincerely hoped that a generous response will accorded Carlton's appeal in aid of the wife and family of Fred Elliott, the old Carlton captain, ruck man, and rover, who is seriously ill. The League has devoted £25 and his old club ten guineas. Mr. Elliott was a great player, of splendid stamina, pluck, skill, and dash, and was known to all Carltonians as "Pompey." He was connected with Carlton in their lean years, helped them on their rise to prosperity and fame, and led them to victory and premiership in their great days. He was a player that deserved well of the football public, especially of the true lovers of Carlton, hence may the fund in the time of need for his family and self be warmly and wholeheartedly supported."
(Australasian June 17 1922 p24)

The Hobart Mercury (Oct 19, 1935 p5) wrote about Roy Cazaly's career. Cazaly's first game was for St.Kilda against Carlton in 1907 when he was just 15 years of age. (He kicked 4 goals)
"He was given a run on the ball, and on the forward line. The Carlton players showed a kindly interest in the youngster, and being well in the lead, all were anxious to give him advice. One big Carlton ruckster, however, 'Pompey' Elliott, decided to give him a try-out. When young Cazaly was flying for the ball he hipped him three or four times while in the air, and naturally the youth decided to get one back. Immediately he did. Elliott patted him on the back, remarking at the same time, 'Steady laddie. That is what I wanted to see. Always come back with hard bumps. Now go for your life."

How Carlton Helped Pompey Through