Life in a prison camp, working in Pentridge, and saving the Blues... 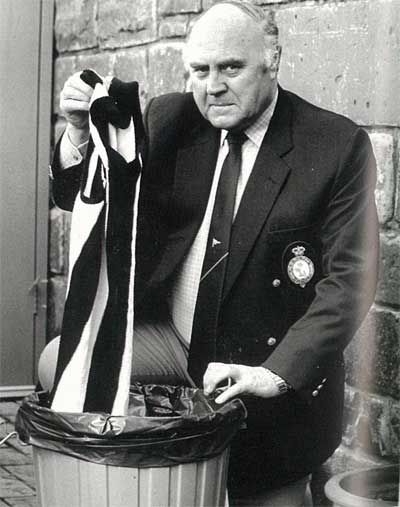 In terms of Premierships, George Henry Harris stands as the most successful President in the history of the Carlton Football Club. During eleven interrupted seasons between 1965 and 1979, he led Carlton to four flags, although his single-minded attitude and rambunctious personality made him a controversial figure. Often referred to simply as “George,” Harris was the first-ever professional President of a VFL club, and a central figure in the sensational dismissal of Australia’s Whitlam Labor government in 1975.

Harris was born in St Kilda in 1922 and served in the Australian Army in World War II. He was captured by Japanese forces during the fall of Singapore in 1942, and returned to Australia after the war to study dentistry. By 1964 was practising privately as well as acting as the official dentist at Pentridge Prison, and supporting the Carlton Football Club as the Blues’ honorary dentist. In that latter role, he became a confidant and a regular advisor to many of the more influential people around Princes Park.

By that time, discontent was rife at Carlton. Without a flag since 1947, the Blues had made the finals only five times in the intervening seventeen years, so a group of prominent supporters founded the Progress Party, an alternative administration with Harris as the prospective new President. On December 7, 1964 an extraordinary general meeting of members was convened at the Brunswick Town Hall and Harris’ ticket swept to power in a landslide, heralding a new era at Princes Park.

The very first action of the new committee was to advertise the senior coaching position, as they had promised to do prior to the election. More than 20 hopefuls applied, but only three were informally interviewed. However, before the selection process had properly begun, Harris heard a whisper that Melbourne’s captain (and six-time Premiership player) Ron Barassi was keen to coach sometime in the near future. George wasted no time in contacting Barassi, with open arms and a virtually blank cheque book. After gaining a handshake agreement from the Demon champion that he would captain and coach Carlton in 1965, George’s tenure was off to a flying start – until early the next morning, when a sheepish Barassi rang back to apologise, and to tell George that after a sleepless night, he had realised that the time was not right for him to leave the Demons.

Harris dug his heels in, and over the next three hours, he summoned every ounce of his persuasive charm, and every angle he could think of to persuade Barassi that the opportunities awaiting him at Carlton were simply too good to refuse. Eventually, when George dropped his phone back into its cradle (and probably wiped the sweat from his brow) Barassi had relented, and formally agreed to lead the Blues for the next three years.

When the news of Barassi’s defection broke, it shook the VFL to its very foundations. It was simply inconceivable that the most influential player in the competition - a man steeped in the traditions of a club that had become his home, and where his father had also played in a Premiership team - could consider defecting. But Barassi himself knew that at Melbourne he would forever be in the shadow of his legendary mentor Norm Smith. If indeed he was going to move into coaching, then it would have to be on his terms, or not at all. Harris was well aware of that condition, and had offered Barassi precisely that opportunity. It was one of the pivotal moments in the history of the Carlton Football Club.

Over the next eight seasons, Barassi fundamentally changed the mindset all-round at Carlton, and indeed, changed the game itself. Prior to his arrival, the Blues had seemed to be content to be competitive; basking in their status as one of the senior AFL clubs, and looking upon any year in which the club played finals football as a success. Barassi very quickly changed all that, driving his players hard on the track and on the playing field. He was tough, he was uncompromising, and soon, justifiably successful when Carlton ended a 21-year drought with a narrow three-point victory over Essendon in the 1968 Grand Final. Harris, Barassi, and champion ruckman John Nicholls – who captained the Blues to the Premiership in his 200th VFL match – were the men of the hour.

Two years later, Barassi engineered a football miracle when Carlton recovered from a 44-point deficit at half time in the 1970 Grand Final, to steamroll Collingwood and snatch another flag with an astounding 10-point victory. That result shattered Collingwood’s confidence for a decade, and marked a new peak in Barassi’s standing within the game. It also fundamentally changed football, by shifting the emphasis from a player’s individual skills to his athleticism, speed and endurance.

Barassi departed Carlton in 1971, having helped Harris and his committee to transform Princes Park into a powerhouse of the VFL. John Nicholls took the reins as captain-coach, and reached the pinnacle of his magnificent career when the Blues kicked the still current Grand Final record score of 28.9.177 in beating another traditional rival, Richmond, for the 1972 flag. By that time, the Blues’ senior players had christened Harris “Gorgeous George” after the American television wrestler to whom he bore a faint resemblance. The laughs were confined to the change rooms at first, but eventually the nick-name was widely used – even by George himself.

Harris retired from the Presidency in 1974 to devote more time to his business interests. He had contributed an enormous amount of time and effort to the Blues in his nine years at the helm, whilst his position also enabled him to establish friendships with many of the country’s rich and powerful. In 1975, the Federal Labor government of Prime Minister Gough Whitlam was in crisis. Amid a series of public scandals, ballooning inflation and high unemployment, the opposition Liberal/Country Party coalition had used its Senate majority to block the government’s money supply, in an attempt to force Whitlam to dissolve Parliament and call another election.

A year earlier, Whitlam and the executive council had authorised the borrowing of four billion US dollars from overseas financiers – at the time, the biggest loan ever authorised by an Australian government. The problem was that they did not obtain loan council approval beforehand, and the Governor General, John Kerr, was not present at the meeting. Having decided to go ahead with raising this enormous amount, the government then authorised two individuals to separately broker the deal. The first was a dubiously-credentialed Pakistani financier named Tirath Khemlani. The other was George Harris.

When leaks from the Treasury Department led to a newspaper investigation and eventually, full exposure of the loans affair, Whitlam sacked his treasurer Jim Cairns in an attempt at appeasement, but it was too late. On November 11, 1975, John Kerr withdrew Whitlam’s commission and installed opposition leader Malcolm Fraser as caretaker Prime Minister, pending a new election. Four weeks later, Australia went to the polls and ousted the Whitlam government in huge electoral backlash.

Never comfortable in the media spotlight, Harris sought refuge from the media glare by returning to Princes Park as President in 1978. “The club was on a real slide, and I started to be put under pressure by a lot of people,” he said at the time; “my ego told me that I could go back and kick things into shape once more.” The difference was that this time, George was to become the VFL’s first paid President.

It didn’t take long for George to start earning his money. Three rounds into the 1978 season, and after three straight losses, newly-appointed coach Ian Stewart resigned for health reasons and was replaced by club stalwart Sergio Silvagni in a caretaker role. A few weeks later, club captain Alex Jesaulenko accepted the responsibility of playing coach. Jezza galvanised a dispirited team languishing on the bottom of the league ladder, and inspired his men into a brilliant second-half of the season. The Blues charged into the finals, only to fall at the second hurdle against Collingwood. Meanwhile, Harris was busy restructuring the club’s financial affairs, and Carlton Football Club Limited embarked on ventures in merchandising, housing, health and various other fields. At the end of his comeback year, George happily reported to Carlton members that the balance sheet was showing a healthy surplus.

By July of 1979, the optimism around Princes Park was heading for another peak when Jezza’s team won their thirteenth match of the fifteen they had played, to be entrenched on top of the ladder as flag favourites. But the following day, the Sunday Age newspaper reported that the Blues’ bold foray into the business sector was not progressing as well as had been claimed. The paper had evidence of property deals gone wrong, and unusual merchandising agreements for products as diverse as wobble boards and spring-loaded chopsticks.

All the rumours and innuendo that ensued was quickly put aside however, on Grand Final day. In the last minutes of an enthralling contest against Collingwood, Blues utility Wayne Harmes’ individual brilliance produced a goal from nowhere, and Carlton won a fourth Premiership under George’s care. Apart from his twin triumphs in 1968 and 1970 with Barassi, this was perhaps George’s finest hour. After all, he had answered a call from his club in distress, and yet again delivered the ultimate prize. However, more storms were brewing on the horizon. Within a month, Harris was facing dissent from some senior members of the Carlton committee, as further revelations about the club’s failing business ventures came to light.

Harris decided on a bold action plan. He was confident that he had the support of the majority of Carlton members, and was looking to expose his detractors to a popular vote. At the Annual General Meeting of the club in December 1979, George denounced the incumbent committee for disloyalty, and submitted his immediate resignation. This quickly split the club into two factions; those for, and against Harris. A petition calling for yet another extraordinary General Meeting – demanding George’s reinstatement was soon circulating, and it had the support of a number of club heavyweights, including the much-revered Alex Jesaulenko.

Both camps shadow-boxed by calling public meetings to rally supporters to their cause, before the two sides met at last in open debate at Festival Hall on Tuesday, February 19, 1980. Taking the stage on a hot, emotion-charged night, Jesaulenko spoke of his determination to leave Princes Park if Harris wasn’t recalled again, but it was prospective new President Ian Rice who swayed the majority with his clear explanation of the financial crisis facing the club. When the only motion to be voted on – calling for Rice to be removed from the committee – was put to the members, they came down heavily in favour of the younger man. Rice was the new President of Carlton, and the barnstorming reign of George Henry Harris was over.

There remains little more to the saga. From the turbulent end of his Presidency, George always remained staunchly Blue. Although a stroke in 1991 slowed him down somewhat, he maintained a keen interest in the fortunes of “his team” until he passed away peacefully on November 26, 2007.

Articles: Harris - the Power & the Glory | 1979: Farewell Jezza and George