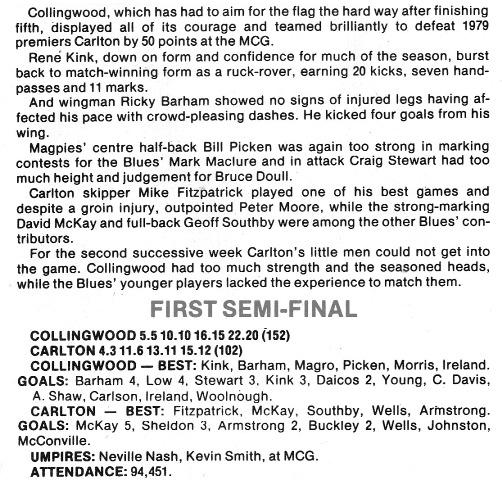 The Blues, fresh from a humbling at the hands of Richmond, were bundled out of the finals by a strong Collingwood side in 1980. After an even first half, the Magpies kicked 12 goals to the Blues four in the second half, this despite the Blues having 33 more possessions and taking 18 more marks for the game. The reigning Premiers were down...but the next few years would show they were most definitely not out.

In this game, Scott Howell became only the second Carlton player to debut in a final. The other Carlton player was Maurie Beasy in the Semi Final, 1920.


''Inside Football Game Review
Early in the game with Carlton's Mike Fitzpatrick overpowering Peter Moore at the hitouts and Greg Wells escaping far too often from opposition centreman Peter Daicos, Kink was the Magpies sole force at centre bounces and the forward line. He didn't have to worry too much about defence. The Collingwood backs applied the squeeze on the Carlton forwards, especailly in the third quarter. As usual such tense encounters, the third term decided the game. In the first half they slugged it out goal for goal, with the Blues having the most decisive break (12 points at the 10-minute mark of the second quarter). Something had to give and it was Carlton, talked of confidently in recent weeks as a premiership fancy, which caved in.

Collingwood drilled the ball into attack and despite, some fine defence from full-back Geoff Southby, was able to score six goals to two. There was an amazing surety in everything the Magpies did. The knock-ons, the flicks, the handballs and the kicks to team-mates had quality. Collingwood, regarded as slow plodders in comparision to the Carlton sprinters, also had speed. Barham, like a champion thoroughbred at Cup time, finally found his galloping legs, and Craig Stewart, who prefers to kick goals rather than prevent them, responded to the switch to centre half-forward with some strong marking. For Carlton, the finals series, which has seen it beaten by 42 points and 50 points has laid bare some worrying tendencies in some of the young champions after last season. Carlton coach Peter Jones said they got it "too easy" last year. They never had to fight long and hard for success. - Trevor Grant Inside Football''

Blues have to toughen up
It is a tough game football! Three weeks ago the talented Carlton line-up was building up nicely for a shot at the 1980 premiership. Everything was all right for them, they were playing well and the other teams in the five seemed to be having problems with injuries and loss of form. But now the Blues must be in a state of shock. Both their finals appearance were too bad to be true. What went wrong with them? I believe it was simply attitude that let them down and a gardual slip away from the little things that win football matches.

They weren't committed enough to putting their bodies in the way of the running opponent. Admittedly they are a small team, but they must look seriously at this aspect of their game. Players such as Buckley, Sheldon, Marcou, Maylin, Wells, Johnston, Ashman and veterans Keogh and Armstrong should take tackling lessons from Richmond's diminutive Dale Weightman and watch some old video-tapes of Barry Cable's defensive work. Half-hearted one arm tackles (and there were several on Saturday) will never stop the likes of a Magro or a Morris.

While on the subject of those two players, Carlton lack aggressive types such as them to put some grit and sting into their approach. Except perhaps for Bruce Doull, they don't have a player who really "plays for keeps". A Neil Balme (as much as Carlton still hate him) would have made all the difference in their 1980 premiership campaign because of the confidence his type inspires in those playing with him.

Where do Carlton go from here? They are a talented team and after they lick their wounds they should emerge with a new resolve for 1981. Captain Mike Fitzpatrick is made of the right stuff. He was magnificent on Saturday with all his teammates falling around him. It makes me wonder a bit why he wasn't front line ruckman all season. Southby too, was just great I thought. He did everything in a disciplined, professional way. He punched from behind, marked when it was his, and displayed a great committment to the Carlton cause. Doull struggled in the finals, but loss of form can happen anytime to the best players. He tried hard, but just couldn't get going.

The problem Carlton face in the future is one of leadership. Those three players I have mentioned are the core of what the team is based on. However, there doesn't seem to be anyone emerging to accept the mantel of responsibility in a tough game. I don't know much about McConville's character, but he does impress me as a good type of player who does all the little things well. Perhaps he is a future leader.

Needless to say there will be some witch-hunting at Princes Park in the next couple of weeks. You can also bet that a lot of the flak will be directed at Peter Jones, when it is in fact the players who let him down. His influence guided them into a position where they had a good shot at the flag, but they blew it. However that is the system.

Perhaps it would be fair for a change for the players to censure their committee, hard to do I know, but Mr Rice and Mr Harris both have created a feeling of uneasiness at the club through their squabbles. Such off-field confrontations must affect the unity of a club and distract the players from the real goal - to win a premiership. To be successful the players must know that everyone is pulling in the same direction. That means everyone from the timekeepers and boot studders to the president. Once the game of politics becomes more important than the game of football, you have got a real problem. The club presidency is not designed for the fostering of publicity.

Back to the players! If in fact I have witnessed David McKay's last game, then I feel privileged. He has been a magnificent player with a couple of his marks on Saturday were reminiscent of his best. His five goals in a final was a good effort, particularily when you consider he played a lone hand up forward. I hope the Blues recruit well. They need a couple of intense players who can instill some resolve into the rest. - Barry Richardson Inside Football.

''Interesting to note that Carlton's best players in the side that lost the first semi to Collingwood on Saturday, were members of the Blues older brigade. Mike Fitzpatrick made beautiful position around the ground, and dominated the ruck duels for most of the game. But "Fitzy" is 27 and has had plenty of finals experience, so his performance was expected. David McKay played a lone hand on the forward line for the Blues. He booted five goals and his overhead marking was, predictably superb. Despite that, I thought Magpie fullback Peter McCormack did a fairly good job all day. McKay is 31 and it was possibly his last VFL match, and if so he went out in style. Other Carlton oldies to perform well were Geoff Southby (almost 30), Greg Wells (30) and Barry Armstrong (almost 30). Southby was probably the best Carlton defender on the day - I thought that Collingwood were able to break through and kick goals with too much ease in the final term, so ragged was the Carlton defence. Southby's experience and commonsense enabled him to thwart many Magpie attacks, but he missed the burly defending back-up of the injured Val Perovic. Bruce Doull tried hard, but was simply out of touch on the day. Greg Wells did his usual number of clever moves from the centre area, although he wasn't as effective as he could be.

It is hard to understand why a good team - and there's plenty of talent in the Blues line-up - does not play with conviction when a premiership is at stake. The younger Carlton players did not exhibit enough enthusiasm to back up the sound, experienced style of their older teammates. They conceded defeat too easily in the last term, rather than getting their backs up and fighting it out to the end. It was also interesting to see how the goals were scored. Carlton scored one goal from a handpass - that's right, only one - six goals from marks, six goals from crumb-gathering and only one from a free kick. To me this suggests a far more fluent attacking structure from the Magpies, with players running by and forwards making good position to score after receiving the ball from downfield. - Kevin Sheedy Inside Football''