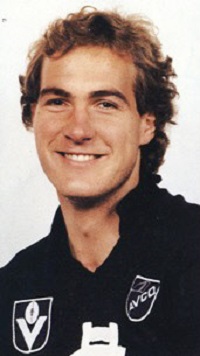 The only third-generation Premiership player in VFL/AFL history, Scott Howell spent nine seasons at Princes Park, beginning with the Under 19 team in 1976. Like his champion father Jack “Chooka” Howell, Scott was a loyal servant of the Blues, and he made the most of his ability with a memorable game in the 1981 Grand Final.

“Chooka” Howell played 137 matches for Carlton from 1942 to 1954, including the desperately-close ’47 Premiership victory over Essendon. Some 25 years earlier, Chooka’s father, Jack (Senior) was Best on Ground for South Melbourne when the Bloods beat Collingwood for the 1918 flag. So Scott’s triumphant victory in 1981 – also over Collingwood - completed the Howell family’s unique achievement of three Premierships in successive generations.

Scott was recruited by Carlton from East Sandringham as a 17 year-old in 1975. He developed his craft as a mobile tall defender in the thirds and seconds teams for four seasons, until he was called into the Blues’ seniors for the cut-throat first Semi Final against Collingwood in 1980. That made Scott only the second Carlton player to make his debut in a final, after Maurie Beasy in 1920. Starting on the interchange bench, Scott was sparsely used as Carlton went down to a rampaging Collingwood by 50 points. First-year Blues coach Peter ‘Percy’ Jones was then promptly sacked, and replaced by ex-Hawthorn Premiership coach David Parkin.

Under Parkin, Carlton collected the minor premiership in 1981, before brushing aside Geelong in the Second Semi Final to set up yet another Grand Final showdown against Collingwood. The Magpies had beaten the Blues in each of their three previous clashes that year, and their prospects were boosted in the lead-up to the game when Carlton’s champion full-back Geoff Southby was ruled out with a lower back injury. The player Parkin chose to replace Southby was Howell, who had enjoyed a consistent season of 14 games in the Blues defence.

In the 48 hours prior to the Grand Final, all eyes were on Victoria Park and Collingwood’s captain Peter Moore; their 198 cm star ruckman/forward and 1979 Brownlow Medallist, who was battling to recover from a hamstring strain he had suffered in the Magpies’ narrow Semi Final win over Fitzroy. After their last training session, Collingwood coach Tom Hafey gambled by selecting his match-winner as a permanent forward pocket, with the aim of stretching the Blues’ defence. David Parkin countered by assigning Howell to shadow Moore, and told him to run the Magpie skipper up the ground at every opportunity. Scott carried out his instructions to the letter, and although he had only a handful of possessions himself, Moore was hardly sighted. Carlton dominated the second half of the match to win by 20 points, and Howell completed the remarkable three flags in three generations feat for his family, whilst also becoming the first (and so far, only) Blue to wear guernsey number 40 in a Premiership team.

Although his career at Princes Park lasted another four years after that 1981 triumph, Howell was never able to claim a permanent place in a formidable Carlton team that remained a flag contender for more than a decade. He was overlooked for the 1982 flag side, and in 1983 changed his playing number from 40 to number 12. That same year, he warmed the bench when Carlton’s season ended with a 33-point defeat by Essendon in the Elimination Final.

Scott’s last senior game for the Blues came at Windy Hill in round 6 of 1985 against Essendon, when the Bombers thrashed their visitors by 109 points. It wasn’t the best way to finish up, but happily Scott’s place in Carlton’s history was already resting on more positive achievements. He played out the rest of the year with Carlton Reserves and experienced the thrill of one last Grand Final at the MCG when the Blues were beaten by Hawthorn in front of a massive crowd.

In 1986, Howell and his Premiership team-mate Mario Bortolotto were cleared to VFA club Sandringham. The Zebras took advantage of Scott’s versatility, and his first two years were outstanding. Playing primarily in the ruck, Howell kicked 36 goals in 36 games, and won consecutive Best and Fairests in 1986 and 1987. Injury curtailed his third season however, and he retired at the age of 30 in 1988.

Scott Howell also holds the record for most number of reserves games played for the Carlton Football Club at 130, which is well below the VFL/AFL record of 201 held by Bob Walker of Geelong.