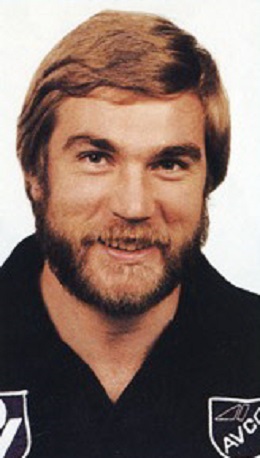 Robbert “Clippity” Klomp was a dual Premiership player at Carlton and one of the most effective lock-down defenders of his generation - although to a legion of football fans from all clubs, he was better known as “the bloke who won the television” after a quirky incident early in his career. More about that later.

Klomp was born in Holland in 1955, before his family emigrated to South Australia. Growing up, he embraced the Australian code of football with Heathfield-Aldgate United in the Hills Football League, where he won the competition’s Under-16 Mail Medal in 1971. A year later he was acclaimed as Best All Round Player for Sturt Colts in the SANFL, and his meteoric rise continued when he was promoted to Sturt’s senior squad to play at centre half-forward in the Double Blues’ 1974 and 1976 Premiership sides. Between those twin triumphs, Robbert captained South Australia’s Under-21 team in 1975. He made his interstate debut at centre half-back for South Australia against Western Australia in 1977, and shortly after that agreed to join Carlton.

Aged 23, Klomp arrived at Princes Park in the summer of 1978-79, with a well-earned reputation as one of the best defenders in the country. Strong, courageous and a willing competitor, he was no speedster, but he was an exceptional overhead mark, read the play beautifully, and was rarely beaten one-on-one. Alongside fellow debutantes Peter Francis, Wayne Johnston and Alex Marcou, Robbert played his first VFL match at half-back in Carlton's 1979 season opener against Essendon at Waverley, when the Blues ran out convincing winners. Some 24 weeks later, Klomp’s fairy tale career reached a new peak when he collected his first Premiership medal, as well Carlton's Best First Year Player award to cap off an extraordinary season.

During that stellar beginning to his AFL career, Klomp did not miss a match all year, and showed his qualities under finals pressure with an outstanding game in the Semi Final against North Melbourne when he completely nullified a familiar foe from Port Adelaide in Russell Ebert, while Carlton beat the Shinboners by six goals. Two weeks later in the Grand Final against Collingwood, Klomp was assigned to the Magpies’ powerhouse Rene Kink, who was hardly sighted after quarter time and Carlton held on to win by a kick, thanks to a brilliant solo effort from Wayne Harmes late in the last quarter.

Midway through 1981 however, Robbert’s career hit a hurdle when he tore a hamstring during Carlton’s round 11 match against North Melbourne. The tear was so severe that it cost him the rest of the season, including the Blues’ gutsy Grand Final victory over Collingwood – Carlton’s second flag at the Magpies’ expense in three years. When he recovered, Klomp played good football again in 1982, to collect his second Premiership medal after the Blues beat Richmond in one of the toughest Grand Finals of that era.

Once again, hamstring problems struck Klomp down while the Blues were preparing for their Premiership defence in 1983, and he couldn’t be considered for senior selection until round 6. Meanwhile, rumours surfaced that both Sydney and Footscray were making lucrative offers to lure him away from Princes Park. Sure enough, a few weeks later, after Carlton lost a fiery clash against Essendon at VFL Park in round 11, the Blues announced that after discussions between all parties, Klomp had been cleared to Footscray. Unfortunately, that decision didn’t extend Robbert’s career to any great degree, because his hamstring problems soon reappeared and he was only able to play another nine matches for the Bulldogs before being forced into retirement.

In 1985, Klomp returned to South Australia for one last season with Sturt, and took his career games tally with the Two Blues to 205. Later, he came back again to Victoria and was active for a number of years with the Carlton Past Players Association and the Spirit of Carlton. In 2010, he coached Donvale Under-18s in the strong Eastern Football League. Now, about that television set.

On a cold, wet night in 1979 at VFL Park, Carlton played Fitzroy in a pre-season night match. Commentators Lou Richards and Bob Skilton noted on a couple of occasions throughout the game that Klomp, Carlton's new South Australian recruit, was keeping a tight rein on Fitzroy's livewire half-forward Mick Poynton. Carlton won the game comfortably, but Richards was apparently caught unprepared when host Peter Landy asked him to name his best player. “I'd have to give it to..er...Klomp,” said Lou - followed by an awkward silence as Robbert's statistics flashed up on the screen; 6 kicks, 0 marks, 6 handballs. Klomp won a Thorn 18-inch colour television for his night's work, but Richards was lampooned for years afterward for rewarding a player with so few possessions. However, he and Skilton stuck to their guns, maintaining that Klomp was indeed a worthy winner, because he had cut a dangerous opponent out of the match.

In a mid-2005 interview, Robbert said that after all that time, he was still regularly asked about his performance on that cold night at Waverley – and of course, the colour TV. It was at his daughter's house, he said, and was still working well. Later again, during a pre-match radio interview on the ABC in 2007, Klomp claimed that his actual stats from Waverley - as recorded by Carlton's statisticians - were 9 kicks and 9 handballs, as he shared yet another laugh about his moment in the spotlight.

After Klomp returned to Sturt in 1985 he would play another 3 seasons before retiring at the end of 1987 after a total of 205 games and 173 goals for the Double Blues. In a distinguished career that spanned 15 seasons, Klomp played 305 senior games including 7 state games and won 2 SANFL and 2 VFL/AFL premierships.