Premiership captain of the Navy Blues, and AFL President. 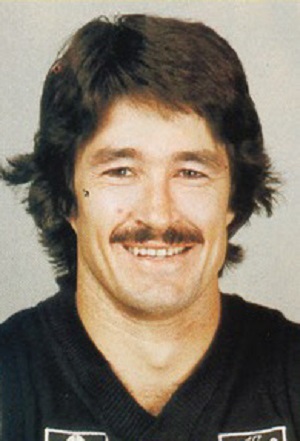 When the Prime Minister of South Africa's Cape Colony, Cecil Rhodes, died in 1902, he left one of the world's great legacies. The multi-millionaire bachelor directed that his fortune be used to provide scholarships to outstanding young men and women from the British Empire and the United States, on the proviso that candidates must have demonstrated a combination of "scholastic excellence, sporting prowess and strong character."

One of Western Australia's brightest young men won a Rhodes Scholarship in 1975. His name was Michael Clifford Fitzpatrick, who, while studying Engineering at the University of WA, was also playing WAFL football for Subiaco. That same year, he would join the Blues, and begin an outstanding VFL career that would afterward see him recognised as one of the great captains of the Carlton Football Club.

By late 1974, Fitzpatrick had already notched up 97 senior games with Subiaco. A mobile, skilful ruckman, he was targeted by several VFL clubs before Carlton won his services. He arrived at Princes Park and celebrated his 22nd birthday before making his debut in round one, 1975. At 191 cm and 92 kg he gave away height and weight to many opponents, but he was clever, athletic and an outstanding mark. Adept at assessing his opponents' strengths and weaknesses, he was a fierce competitor who hated being beaten. "Fitzy" played every game that year, and by season's end was already considered a future captain of the Blues.

His studies took him to England's Oxford University in 1976 but he was able to return for the latter part of that VFL season, including two losing finals matches. He was away again throughout 1977 and managed just two appearances in 1978. After his full-time studies were completed, Fitzy and indeed, all Carlton supporters, were keen to have him back in 1979 - and he didn't disappoint. With Fitzpatrick and the wiley veteran "Percy" Jones making up a formidable ruck division, the Blues had a great year, topped off with a fighting 5-point Grand Final victory over Collingwood. Fitzy had a superb final series, showcasing his tenacity and an ability to lift himself and his team on big occasions. He was a popular and deserving winner of Carlton's Best and Fairest award.

Soon after the glory of the '79 Premiership, ructions split the Carlton Football Club when President George Harris was tipped out of office and replaced by Ian Rice. Percy Jones retired as a player to take on the coaching role, and Fitzpatrick was appointed captain. It was a popular decision all round, and the Blues began 1980 as flag favourites. Carlton went to top of the ladder after the home & away rounds, only to let themselves down by losing successive finals to crash out of contention. That brought an end to Jones' brief coaching career. His place was taken by former Hawthorn Premiership coach David Parkin, who happily, found an immediate empathy with Fitzpatrick. Both were committed to success, and intent on making amends for past failures.

Driven by the disappointments of the previous year, Carlton finished the 1981 home & away rounds on top of the ladder by percentage over Collingwood, and went on to face the Magpies in the Grand Final. On that special day, Fitzpatrick rucked tirelessly all match against Peter Moore, and had the better of the Brownlow Medallist as the Blues won their thirteenth Premiership by a comfortable 20 points. Bruce Doull won the Norm Smith Medal for Best on Ground, with Fitzy next best in the votes.

Season 1982 should be remembered as one of Carlton's greatest ever. Not just for the feat of winning consecutive Grand Finals, but rather for the enormous physical effort required by every member of the team to defend the title. In a tough season, Fitzpatrick was inspirational on countless occasions. Always dangerous in attack, he regularly pushed forward to deliver vital goals when they were most needed. And when emotions spilled into confrontation, the captain was always there to fly the flag. He may have been a man of books, but he always stood ready to look after himself and his smaller team-mates when required.

Carlton began the '82 finals in third spot behind Richmond and Hawthorn. In a torrid Qualifying Final against Hawthorn, Blues' stars Wayne Johnston and Peter Bosustow were reported and subsequently suspended for two weeks and one week respectively. Carlton steamrolled the Hawks in the second half to win by 58 points. Then on the following Saturday, Carlton were no match for Richmond in the second Semi-Final. As always, the Tigers relied on physical pressure to unsettle their opponents. They hit hard and hit often to beat the Blues by 23 points; giving away 62 free kicks to Carlton's 36, on the way to a week's break and a place in the Grand Final. 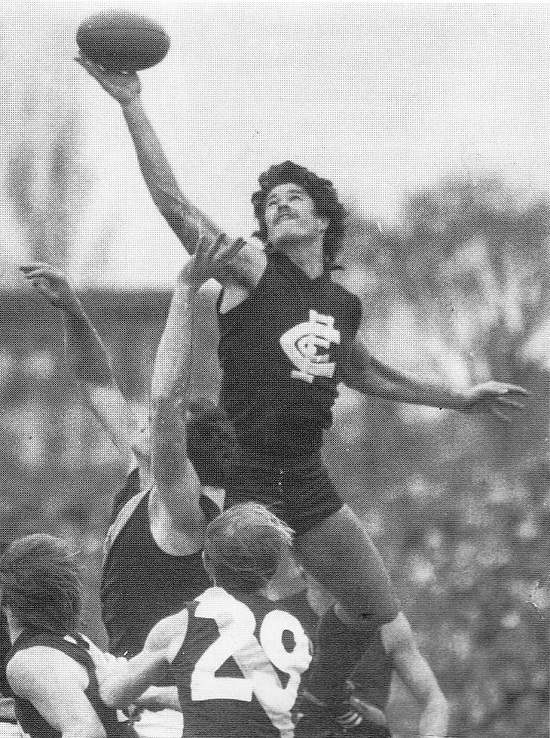 While Richmond had their week off, the Blues met Hawthorn once more in the Preliminary Final. Bosustow had returned, but Jimmy Buckley and Mark Maclure didn't come up at training. On selection night Parkin and the match committee swung Fitzpatrick to centre half-forward to cover for Maclure, and Wow Jones into first ruck. In another fierce, physical clash, Leigh Matthews ran through Carlton's Rod Austin in the opening minutes. Fitzpatrick was first on the scene to even up and Matthews quickly learned the error of his ways. The Blues refused to take a backward step from that moment on, and when "Curly" Austin ran back out onto the ground after half-time, the whole team lifted and went on to win by five goals.

However, after three successive gruelling matches, Carlton were at long odds against Richmond in the Grand Final. The Blues regained Johnston, Maclure, and Buckley, while the Tigers were at full strength, rested and confident. As expected, Richmond went hard at the man and the ball from the opening bounce. Spot fires broke out all over the ground as Carlton slammed on two goals in the first two minutes, while commentator Lou Richards couldn't take it all in and exclaimed, "this is the toughest opening ever!"

At half time Richmond had clawed their way to an eleven point lead, but Carlton had had four more scoring shots and an edge in general play. Fitzpatrick and big Wow Jones were on top of the Richmond rucks, Bruce Doull was impassable in defence and Wayne Johnston was brilliant in the centre. Coach Parkin demanded that his players take the initiative in the third quarter. He sent wingman Wayne Harmes to the back pocket, and captain Fitzpatrick to centre half-forward. Both moves were justified as the Blues ran rampant. Fitzy was the focal point in attack, marking strongly twice to kick telling goals as Carlton slammed on 5.4 to Richmond's six behinds for a 17-point lead at three-quarter time.

As the fresher and fitter of the two teams, Richmond were expected to finish strongly, but that didn't happen. The Blues were magnificent in that last quarter as wave after wave of Tiger attacks foundered on the rocks of the Carlton defence. Fitzpatrick limped off the MCG late in the quarter with a satisfied grin on his face and appreciative applause swelling around the ground. The final margin was 18 points. Fitzy had won his third Premiership medal and his second as captain.

That ankle injury, and others to his hip and hands, plagued Mike throughout the 1983 season. When he and his beloved Blues limped into the finals that year, only to lose the first Elimination Final, he knew it was time to call it a day. Tributes from friends and foes everywhere poured into Princes Park when he announced his retirement after 150 inspirational games and 150 goals in his familiar number 3. He was 30 years old, and a marvellous sporting career had ended, but there were more achievements of a different kind ahead. 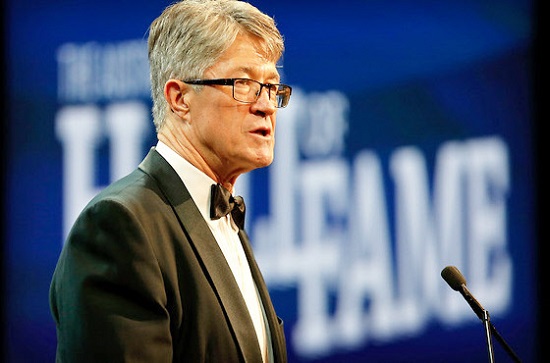 With a Bachelor of Engineering (Hons.) from the University of WA, as well as a Bachelor of Arts (Hons.) from Oxford University to his name, Mike has been as spectacularly successful in his subsequent business career as he was on the football field. After a couple of seasons as Vice President of the AFL Players Association, he spent time in New York with the giant financial house Merrill Lynch before returning to Australia to senior positions with the Victorian Treasury and Telecom Australia. He then founded Hastings Funds Management Ltd and served as the company's Managing Director. He has also been Chairman of the Australian Sports Commission, a member of the Melbourne Park Tennis Centre Trust, and a Director of the Carlton Football Club.

In 1992, Fitzy was elected to the Carlton Hall of Fame, and in early 2000 was named on the bench in Carlton's Team of the 20th Century. In 2003 he was appointed to the Board of the AFL Commission, and in March 2007 he became one of the most powerful and influential figures in the game, when he succeeded Essendon's Ron Evans as AFL Chairman.

In a decade in the top job, Fitzpatrick oversaw the expansion of the game at all levels, including the admission of two new teams (the Gold Coast Suns and Greater Western Sydney) and the construction or refurbishment of stadiums in six states or territories. When he retired in 2017, the AFL could boast of record attendances, record television ratings and spectacular early success with the AFL Women’s Competition.

Cecil Rhodes would surely have approved!