Carlton were too strong for Brisbane at Princes Park, in Jon Dorotich's last game for the Blues.

Carlton would be threatened early by cellar-dwellar Brisbane at home at Princes Park, but come out fighting in the second quarter to take this game by 5 goals. Without Captain Stephen Kernahan, the Blues found their way to goal through stand-in full forward Stephen Silvagni, Earl Spalding and Steven Oliver. Again, in a common theme for the Blues in 1993 except in games against the Bombers, our small forwards were dominant with Adrian Gleeson kicking 4 and ‘Heavs’ kicking 3.

Gleeson would take the votes from Ang Christou, who had 21 possessions at half-back, and Justin Madden with 23 possessions from the ruck. Our normal midfield strength was again present, with Greg Williams earning 29 possies plus a goal, Fraser Brown earning 21 plus a goal, and Craig Bradley earning 27. Peter Dean and Michael Sexton showed the dominance of our half back line by each winning the ball over 20 times.

Carlton would move to 6th spot with this win. 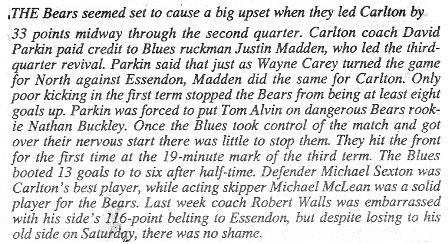 Last Game: This game would be the last for Jon Dorotich, who wore the number 6 guernsey in 132 games for the Blues.
100 Goals (AFL): Earl Spalding