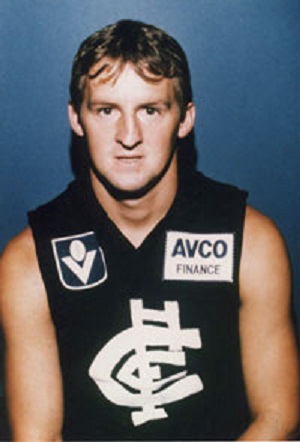 The first (and so far, only) player to wear guernsey number 38 in a Carlton Premiership team, Shane Michael Robertson played 80 VFL/AFL matches for the Blues over nine seasons from 1983 to 1991. He carried the nickname “Yo-yo” around the club for a large part of his career – because he was constantly up and down between the Seniors and Reserves - but Shane left nothing in the tank in each and every game he played, and was highly respected for his selfless attitude throughout his stay at Princes Park. When his time as a Bluebagger ended, he moved on to more success in a long coaching career in country football.

Born in Melbourne’s outer-north at Broadmeadows, “Robbo” was educated at three renowned football nurseries; St Dominic’s, Therry College and St Joseph’s CBC, before beginning his football odyssey by touring Ireland with a Victorian Schoolboys team. Carlton recruited him from North Melbourne Old Boys in 1981 and he joined the Blues’ Under-19 squad, but within a few months he was playing Reserves football with one of the strongest lists in Carlton’s history.

Equipped with pace, good aerial skills, and a penetrating kick on his preferred left foot, Robertson was promoted to the Seniors for the first time midway through 1983. On a cool and cloudy Saturday afternoon at Princes Park in round 13, he began the game against Footscray in a forward pocket, and spent the afternoon watching the ball sail over his head on its way through Carlton’s goal, as the Blues demolished the Bulldogs by 89 points.

He didn’t manage another senior game that year, but a few weeks after his debut Robbo began collecting medals when the Blues won the final of the mid-week Sterling Cup Night Series – a short-lived, designed-for-television competition played at VFL Park. Just under 33,000 fans trekked out to Waverley to see Carlton beat Richmond by six goals in the final, and acting captain Wayne Johnston give his victory speech with his mouthguard still in place! At the end of the year, Shane’s infectious enthusiasm around the club was recognised when he was presented with the Reserves Best Clubman Award.

In 1984, Robertson played another five senior matches - either in the centre, or on a wing - and kicked three goals. The rest of the time he was busy helping the Seconds through to a notorious Grand Final against Melbourne. In that match, held before a crowd of 90,000 as the curtain-raiser to the Essendon-Hawthorn flag decider, a huge brawl broke out before the opening bounce, and Robbo was one of eight players reported during a spiteful clash. The Demons eventually won by six goals, and a few days later, Shane was voted runner-up to Brendan Hartney as Reserves Best and Fairest. It was more of the same in 1985. Robertson managed nine senior appearances, then finished the year off playing in front of 100,000 on Grand Final day when Carlton Reserves lost a second-successive curtain-raiser to Hawthorn. This time, he finished third to Reserves Best and Fairest Brad Shine while picking up Best Clubman for the second time in three years.

Prior to the 1986 season, Carlton and Fitzroy swapped coaches, with David Parkin packed off to Brunswick St., and Robert Walls welcomed back to Princes Park. Robertson had played only 15 matches in three years by then, but that was all about to change. Walls gave Shane his confidence, and he responded with a break-out year. By September, he was a fixture in the side as a reliable utility, and his first finals series as a senior player was a good one – although Hawthorn triumphed again in the Grand Final and inflicted yet more disappointment.

At that stage of his career, after being on the losing side in three successive Grand Finals, Robertson may well have thought that the door to Premiership glory had slammed in his face. However, the Blues bounced back to finish on top of the ladder in 1987, and fought their way through to a Grand Final rematch against Hawthorn. In baking heat at the MCG, Shane was matched against the Hawks’ Brownlow Medallist Robert DiPierdomenico for much of the journey, and later conceded that he was “towelled up” in the first half. But he came back hard after half-time, to be instrumental in the Blues’ triumph by 33 points.

As so often happens, the glow of that achievement lasted only until the following year, when Robbo underwent a full shoulder reconstruction and was restricted to just five matches over the season. In most of those games, he wore a long-sleeve jumper with the sleeves cut off just above the elbow, in an attempt to hide the brace on his shoulder. Soon called the “tee-shirt” guernsey, it made him unmistakeable on the field. 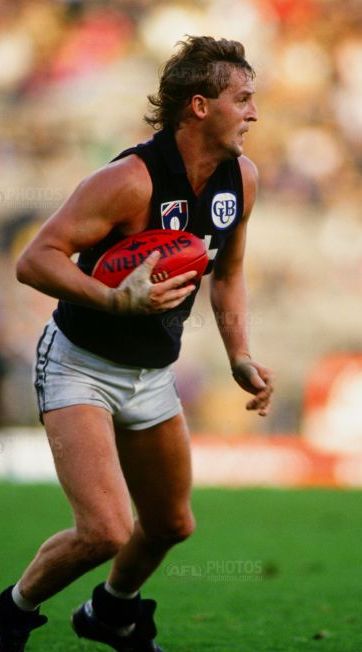 Robertson’s third coach during his career at Carlton arrived midway through 1989, when Walls was abruptly sacked and replaced by club legend Alex Jesaulenko. “Jezza” used Shane as a midfield tagger during the second half of the season and he adapted well, although Carlton slumped to eighth on the ladder and missed the finals for the first time in 12 years. Then early in 1990, injury cost Robbo a string of matches. He wasn’t able to earn a recall to the Seniors until round 18, but after that played in all of the remaining games as the Blues once again finished eighth.

Meanwhile, Carlton’s Reserves had finished on top of their ladder, and on Grand Final day, Robertson took part in his fifth daytime Premiership decider when the Blues took on their former nemesis Melbourne once again. In another fiery clash in front of a huge crowd, Carlton recovered from a four-goal deficit halfway through the third quarter to dominate the final term and snatch the flag by 18 points. Shane flew under the radar somewhat in a back pocket, and was quietly effective.

In 1991, Carlton went back to the future when Jesaulenko decided not to continue as coach, and Parkin was convinced to return in his place. Once more, Robertson started the season slowly, waiting for a call-up to the Seniors until the round 8 clash against Hawthorn at AFL Park. The Hawks led all day, then slammed through 8 goals in the last quarter to blow the Blues away. Shane didn’t know it at the time, but that was to be his last match in navy blue, because only days afterwards, he was told that his services were no longer required. He was offered help to find another club if he registered for the mid-season draft, but in the end, decided not to continue. Instead, he “went bush” looking for coaching opportunities, with conspicuos success.

First stop was Daylesford in central Victoria, where, despite suffering a serious injury, Robertson served as captain-coach for six seasons. In 1994, an opponent crashed into his back during a match and Shane was rushed to hospital with a major dislocation in his neck. At first, grave fears were held for his future, but after weeks spent in traction he fully recovered and played again the following year.

In 1998 he moved on to Castlemaine in the strong Bendigo Football League, where he was judged the Magpies’ Best and Fairest in his first season. Two years later, after retiring from the field, he coached the club to the 2000 BFL Premiership, with the assistance of another former Blue, Steven Oliver, who dominated the competition and kicked 132 goals.

Having completed five seasons with Castlemaine, Robertson briefly returned to Princes Park in 2003 to take up the role of assistant coach at Carlton’s VFL affiliate, the Northern Bullants. After just one season in Melbourne however, he was talked into returning to the Central Highlands Football League as coach of the Hepburn Kookaburras. At the time, the Burras were at rock-bottom, having seen little success for 20 years. But a revitalised club committee had taken charge, and their enthusiasm galvanised the club and the district. With their support, Robertson transformed Hepburn into the powerhouse of the CHFL, and won four flags in ten seasons.

In 2013, Shane was on the move again to Seymour in the Goulburn Valley Football League, where he stayed only one season before responding to an appeal by his old colleagues at Castlemaine. He took the helm at the Magpies again, but this time progress was slow and the club finished in the lower half of the BFNL ladder from 2014 to 2016.

Robertson's three older brothers; Denis, Noel and Glen, were also capable players who tried out at North Melbourne and Carlton, but didn’t progress past the Under-19s.