Tom may be one of the eight people who founded the club. There is a reference to an after game party held in the rooms at the old East Melbourne ground, where one of the founders is mentioned as "Sir Herc." Could this be a reference to Tom being known as a "Pocket Hercules"?

Tom Gorman - A Triton among minnows.
Tom, a "heavy charger"* and his brother W. 'Bill' Gorman were original members of the earliest Carlton teams.

"In the 1860's Tom Gorman of Carlton was celebrated for his powerful shoulders. He was called "the pocket Hercules."
Of him a poem was written:

That doughty warrior would hold his own,
He had wonderous strength in his collar bone.

1866 In our first game in 1866, one newspaper referred to Carlton as "the wild men" of Carlton. The report went on:
"Whether the Carlton men deserve it or not, they have a reputation for playing a very rough game and not being particularly observant of the rules. Many persons prophesied that the afternoon would not pass without a barney, or something worse, and they were not far wrong. The game was stopped for 20 minutes through a misunderstanding which occurred between the South Yarra captain and one of the Gormans.""

1867 "Who that has seen him play will ever forget Tom Gorman, the Carlton heavyweight, there was no slinging with Tom, but a fair shoulder-to-shoulder and down the opponent came".
(Centenary Souvenir of Carlton Football Club p6)

1868 Gorman, Tom or brother W."Bill"?
Outstanding player for Carlton during the season.
The Carlton Story, H.Buggy and H.Bell. p17) 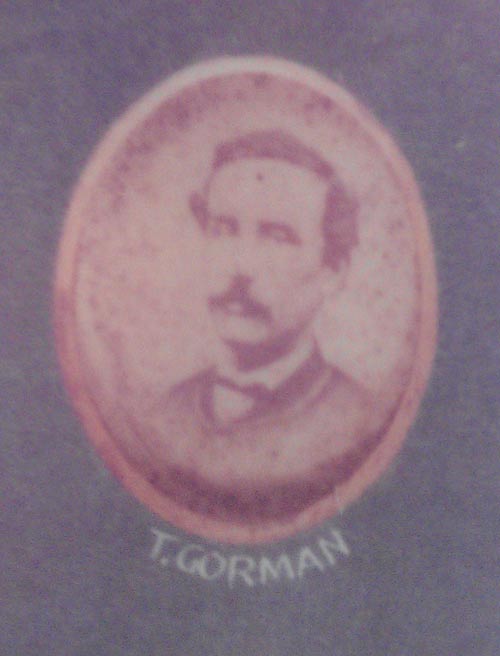 1871 July 08
Carlton played Melbourne in the Richmond Paddock.
The match was drawn and T. Gorman was named in the better players for the Blues.
The Leader report said;
" T. Gorman always deserves special mention for having hurled destruction into the Melbourne ranks on two or three occasions."

Tom's descendants have been in touch with Blueseum.
The family say that Tom was the station master at Euroa before he moved to Hamilton, and;
"The Kelly Gang used the Station Master's house to hide until they were ready to rob a bank. Thomas's children Thomas, Frank and Edith played marbles with the Kelly Gang."

The Kelly Gang robbed the Euroa National Bank of £1,646 on 11 December 1878.
The web site www.kellygang.asn.au says that the Euroa station master that day was a Mr. Gorman.
The Argus' report of the robbery 12 December 1878 (p6) said the gang cut Euroa's only form of communication. They cut the telegraph wires which ran along side the railway line in two places. They were cut some miles from Euroa on the Melbourne side and about 100 ft of wire was removed from the Albury side of the town.
After the robbery 14 hostages were taken mostly from the National Bank including the bank manger Mr. Scott and his family. They were driven in waggons and a buggy by the gang in full view of the unsuspecting town folk to Faithful's Creek some 5 miles away.
At 8pm. the gang headed in the direction of Violet Town, the hostages at Faithful's Creek mangaged to free themselves.
The National Bank was only 50 yards from the railway station.
Tom was aware that the telegraph was not working and had sent repairmen to find the fault. They would be captured by the Kelly Gang.
The bank raid took place mid afternoon, but it would be about 9.30pm that evening when Tom Gorman, who was at the local hotel helping to organise the Boxing Day sports meeting, was summoned to the railway station.
"He shortly afterwards returned in an excited state, informing us that the Kellys had robbed the bank next door during the afternoon and had taken the Scott family and clerks out to Faithful's Creek."
( www.euroa-gazette.com.au/articles.aspx?d=3226 )
The Argus said;
"The Kellys had, however, driven away the horses belonging to the two carts, and there was only Mrs. Scott's buggy left to take the whole party home. The women were therefore put in the buggy and driven back, while the men walked down the line to Euroa, and at once gave information to the authorities of what had occurred.
Owing to the prompt action of Mr. Gorman, the station master at Euroa, the telegraph line was repaired and communication restored with Benalla very soon afterwards."
The Age 13 December;
"Nothing further was known by Mr. Gorman until a quarter to ten p.m. when one of the repairers who had been in custody informed him of the whole circumstances. Mr. Gorman at once sent a telegram to the Chief Commissioner of Police at Melbourne, and then proceeded to the police station and asked Constable Anderson to proceed to Benalla by the 4.40pm train to give full information."

1872 ? Tom Gorman departed for Hamilton where he was to become the railways station master.

1879 August 30
Tom Gorman came down from Hamilton to take part in an old players match between Carlton and Melbourne veterans on the Melbourne Football Ground.

"Among those who have narrowly escaped having unfriendly interviews with Ned Kelly and his mates is Mr. Gorman, our station-master (says the Hamilton Spectator). This gentleman was acting in a similar capacity at Euroa when the bank there was robbed, and shortly before the ordinary hour for closing went to pay in some £80.
He was rather surprised at finding the door closed, knocked, and called out to the clerks, but no answer was vouchsafed. Everything inside the institution was as quiet as it possibly could be, and he thought his watch must be wrong. He was subsequently informed that, had he opened the door and entered, the first intimation of anything unusual occurring would have been the muzzle of Steve Hart's six shooter, that worthy having been awaiting his entrance. Probably had the robbers known he was the possesor of £80 an invisible agency would have caused the portals to fly open, and Ned Kelly & Co. would then have the handling of some Government money.
It is Mr. Gorman's impression, like that of many others, that the Kellys have long since cleared out of the Strathbogie ranges, which are about as inhospitable a place as well can be imagined. He can understand provisions being conveyed to them for their personal use, but says no horses could subsist on the scanty herbage, and horse-feed could not well be taken there without the carriers being seen and overhauled by the lynx-eyed police. What would render their escape easier than generally believed is the fact that, notwithstanding all the photographs, the Kellys are really but little known to the police."
(Clarence and Richmond Examiner & New England Advertiser NSW, 06 September 1879 p3)

Ironically, in 1879 four young men in southern NSW decided to rob people and pretended to call themselves the "Kelly Gang," one of the bushrangers was a 21 year old named Thomas Gorman!
(Trove: Maitland Mercury and Hunter River General Advertiser, March 01 1879 p6)

HAMILTON Wednesday
The stationmaster Gorman died this evening from diphtheria at half-past five o'clock.
His loss will be keenly felt here, where he had made many friends during his short residence.
His son Thomas remains in a critical condition, and is not expected to recover.
The Argus (p6)

1880 May 01
The Australasian
"Another old Carltonite, Tom Gorman, has gone to his rest, cut off suddenly by diphtheria in Hamilton, in full vigour of manhood. In years gone by, when "sacks on the mill" and other luxuries were in full swing, Tom was a "Triton among minnows," and figured prominently in many a stubborn charge and desperate scrimmage, and no doubt his burly form will be well remembered by those whose memories carry them back to the Melbourne and Carlton struggles of '69.
I understand the club with which he was long indentified intends getting up a concert for the benefit of his widow and children, and it could not well exert itself in a more praiseworthy manner."

1880 May 22
The Argus, reports a concert at The Athenaeum to be held on Wednesday 26 to aid the family of the late Thomas Gorman, who died painfully a few weeks ago from diphtheria.
Tom Gorman and three of his children died of the diphtheria epidemic in Hamilton.
Gorman was the station-master at Hamilton (railway station) and died Wednesday April 28 at 5.30pm.
The concert was attended by many people and was held under the patronage of the Victorian Football Association, the Melbourne Football Club, the Carlton Football Club and the Metropolitan Rifle Corps. 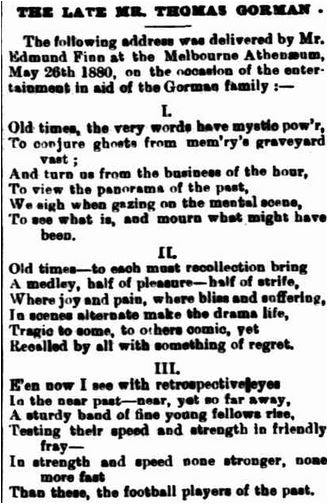 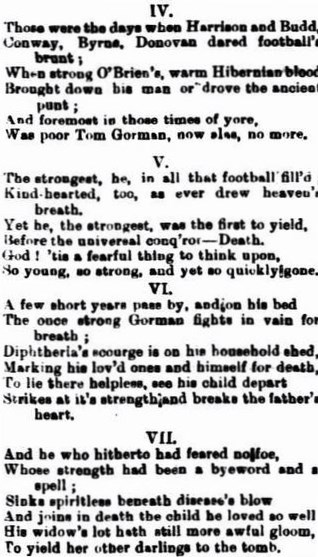 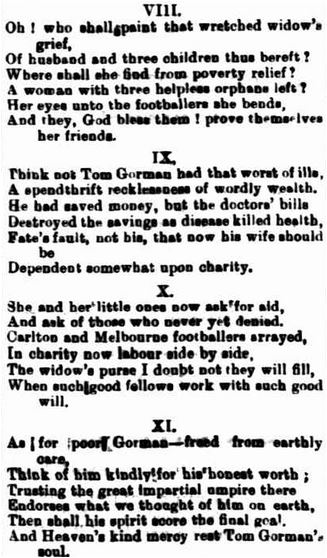 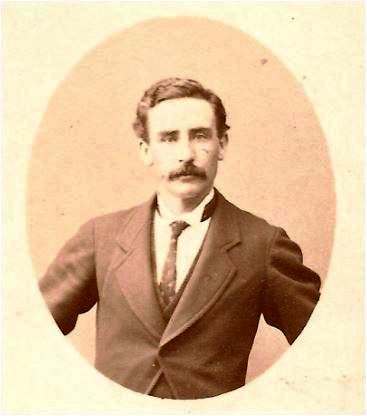 Relation of H. W. Gorman and A. Gorman ?