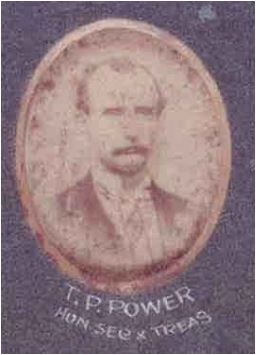 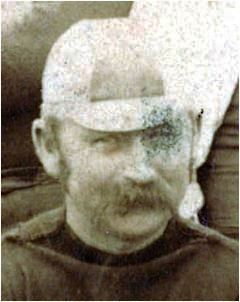 The Power family arrived in Melbourne 26 May 1854 on board the Koh-i-noor.
The Powers ventured to the gold fields of Ballarat, but after witnessing a horrifiic mining accident in 1856 the family moved to the city where they managed the Harp of Erin Hotel in Madeline Street (now Swanston Street ) Carlton.
Carlton FC historian Tony De Bolfo's article has more on the Power story. See Tom Power Revealed - link at the bottom of this page.

Above right; Could this be Tom Power?
See October 1881 for photo of former Carlton players.

One of the co-founders of the Carlton Football Club Andy McHarg in an interview with The Referee newspaper Sydney March 03 1915;

"The earliest members included T. P. Power, who Mr. McHarg considers was mainly responsible for the improvements made in the pastime. He was the brains of the game in those days., and was always on the lookout for opportunities of advantageously amending the code."

One of the pioneer players in 1864 and editor of "The Footballer" annual.

1868 May 05
The Argus (p5) reported;
"The treasurer of the Melbourne Hospital acknowledges the receipt of £20 from Mr. Thomas P. Power being a donation from the Carlton Original Popular Readings in aid of the funds of the institution." 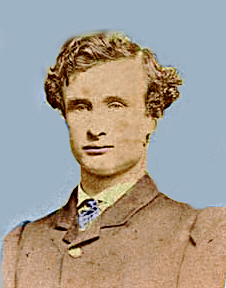 Tom Power played in the drawn Challenge Cup match against Albert Park June 18 1870.
The Royal Park ground was inches deep in slush.
It was the first time Carlton had played in a match where the ends were changed at half time.


T. P. Power was the editor of "The Footballer" which ran from 1875-1881. It was the first publication devoted to Australian Football.
Note, the front cover was designed and engraved by former Carlton footballer Angelo J. Azzopardi.
(To view the first edition of The Footballer, click here> www.slv.vic.gov.au/footballvicpam/gid/slv-pam-aaa19900/1 then click on thumbnails to enlarge the page)
(The Carlton Story, H.Buggy and H.Bell p24, 160)

1877 Tom Power was also the first Treasurer (?) of the newly formed Victorian Football Association.
Although nineteen years later, T. S. Marshall in an address to the VFA on May 08 and reported in the Weekly Times May 16 1896 (p9) says;
"Mr. H. H. Budd was the first secretary, and Mr. Tom Power the first president."

1877 The Melbourne Hurling Club sent a message of thanks to Carlton secretary Tom Power for helping the club in the drawing up of its rules.
(Age June 18 p3)


FOOTBALL AT HOME AND HERE

Tom Power who recently returned from a visit to Britain talks to the Sportsman newspaper (March 17 p6) about the British Association, Rugby and Australian Football.
To read click here> http://nla.gov.au/nla.news-article227679710

1889 June 30
At the VFA meeting at Young & Jacksons, Tom Power along with H.C.A. Harrison, H.H. Budd, and Jas. Boyd were made an honorary life members of the VFA.

Tom Power had a saddlery business.
"Under the heading "The Paris Exhibition," in Saturday's Argus appears the notification in Australasian Awards-
"Saddlery - Gold Medal, - Mr. T. P. Power Melbourne"
Now that's just splendid! There's my old Scotch College chum of the late fifties going and knocking the stuffing out of the Whole World! Of course it wasn't Thomas Peter himself as did it; Jim Dooley (his foreman) and the henchmen participate in the honour and glory, But the bald-headed fact remains that in a Colonial manufactory in Little Bourke-street Colonial workmen manufactured out of Colonial leather an exhibit that took the cake at Paree! I tell you it does us Colonials proud! Not Victorians alone; no! Nor New South Walesmen! Nor Tassies! But the Whole Blooming Lot of Us! It's honour to Australia! That's what it is! And that's what everybody said to Tom Power as they congratulated him on his splendid success last Saturday."
Olympus - The Melbourne Punch August 29 (p139) 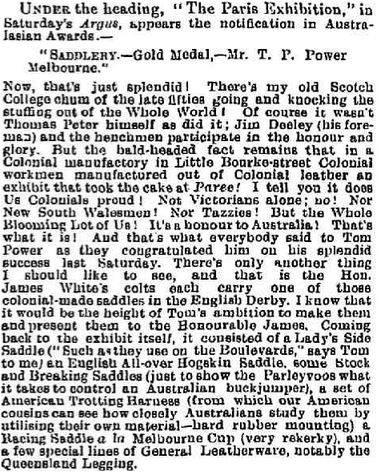 "Another old identity passed away this week. In the palmy days of the Carlton Football Club there was no name better known in football circles than that of T. P. Power. He was a host in himself in furthering the interests of the Carlton club, and as hon. secretary for several seasons he was simply the personification of energy.
Those were the days of J. Donovan, O. T. L. O'Brien, T. Gorman, J. Gardiner, G. Kennedy, W. Dedman, Harry Guy, G. Coulthard, W. Monie, W. Goer, W. Newing, J. Clark, G. Robertson and others, when the ringing shouts went up Saturday after Saturday, and season after season. "Forward Carlton," "Now then, Carlton."
I shall never forget the pride Tom Power used to take in connection with the preparation of illuminated addresses for presentation to players. Robert Richardson who died some months ago, was a dab hand at ornamental penmanship, and many a Sunday he spent at Tom Power's request in producing really beautiful work, and the care bestowed on the ornamental work was only exceeded on the care bestowed on the composition of the address. The drafts were something to look at after all erasures, interlineations, and marginal corrections had been completed.
T. P. Power was a man of unbounded energy, and fine business capacity, and on the sport of football alone he published one of the most readable records ever printed in Victoria. Old Carltonians especially will read of his death with keen regret. He attained the age of 60 years."
("Felix" Australasian p20)

Image: Australian Football Jubilee 1908
Could Tom be wearing the Gold Medal he won at the Paris Exhibition? 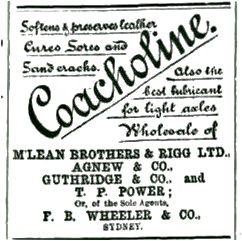 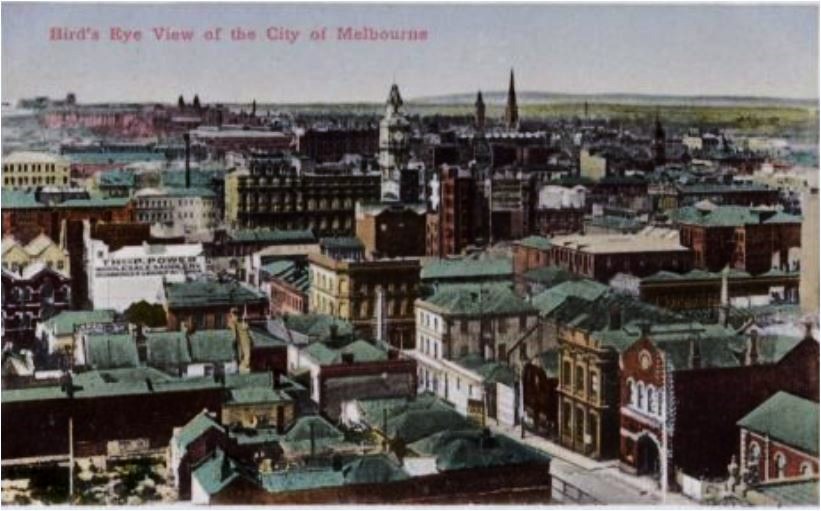 White building with "THos. P. Power" saddlery advertising.
Tom's saddlery business was at 398 Little Bourke Street. As his premises face Little Bourke the advertising is on the western side of the building.
Looking at Google Earth (2017) it seems that the building is still there. There is now a Nando's and The Spud Bar on the corner of Goldie Place near Hardware Street.
Both the building at the rear in Goldie Place and the reddish one opposite, across Little Bourke Street look to be still standing, although this second one has had a couple of floors added to it.
The Melbourne GPO with it's present clock tower (completed 1887) can be seen. To the right of the GPO are the two spires of Scots Church and the Uniting Church both on the corner of Collins and Russell Streets.
This hand painted image may have been taken from a taller building in Queen Street or probably from the Supreme Court of Victoria tower in William Street, built between 1874-84.
Image; auscivilwar.com