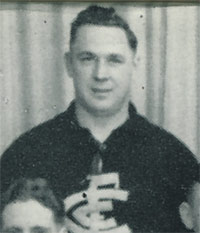 
Although he was a popular member of two Carlton Premiership teams, Charlie McInnes’ contribution to the Carlton Football Club during the harsh years of World War II has perhaps been downplayed because of the number of times he sat on the reserve bench for his team. That in itself however, is a tribute to the versatility - and the loyalty - of a fine player who wore the number 31 guernsey into battle on 118 occasions for the Navy Blues, and kicked 93 career goals.

Recruited by Carlton from Tyntynder in northern Victoria in 1938, McInnes unknowingly set a precedent by being named as 19th man in his first two senior games. In his third match he played forward and kicked two goals, before Blues coach Brighton Diggins sent him to a half-back flank - where the barrel-chested, heavy-set dasher also did well. Back when there was only one spot on the bench, the 19th man could replace an injured team-mate, but then had to stay on the field for the rest of the game. Therefore, versatility was a prime requisite for the ‘bench warmer’, and Charlie fitted the bill.

A late-season leg strain kept him out of Carlton’s 1938 Semi Final victory over Geelong, but when he proved his fitness in the week prior to the Grand Final against Collingwood, he was included in the side at the expense of Eric Huxtable. Then, under the inspirational leadership of Brighton Diggins, and in front of a massive record crowd of 96,834 at the MCG, Carlton outsmarted and outplayed the Magpies to win the Blues’ first Premiership for 21 years. Charlie McInnes and Ken Baxter were the only two first-year players to make that Grand Final team.

After Carlton suffered the almost-mandatory Premiership hangover and finished fifth in 1939, Australia was swept into the maelstrom of World War II. Like hundreds of other VFL players, McInnes signed on to do his bit, and was posted to the Australian Service Corps. One of the fortunate ones, his duties allowed him to continue playing with Carlton throughout the war years. As a result, he became a stalwart of a Blues team that was often disrupted when players were sent away to the many theatres of war within Australia and overseas.

When Percy Bentley replaced Brighton Diggins as coach of the Blues in 1941, McInnes became one of the Blues’ go-to men in attack. Charlie may not have been the most accurate kick for goal in the team, but his ball-getting ability (and the number of opportunities he created) was a valuable asset. During seasons 1942 to '44, his 48 matches for Carlton produced 65 goals, including hauls of five (in round 16, 1942 against Richmond) and six in round 15, 1943 against North Melbourne.

By 1945, as the tide of war changed in favour of the Allied forces and Carlton’s team was steadily strengthened by players returning from active service, McInnes found himself warming the bench more often. He played 12 games in the home and away season (during which Carlton recovered from a horror start to snatch a finals berth with an emphatic last-round victory over Footscray) but was left out of the Blues’ victorious Semi Final and Preliminary Final teams.

The latter was a near-riot at times, sparked by a traditional rivalry and inflamed by a string of ill-tempered incidents. To Carlton’s deep relief, our only casualty from that affair was wingman Fred Fitzgibbon, who landed a 4-week suspension for striking. Therefore, when Carlton’s match committee sat to select the team to play South Melbourne in the 1945 Grand Final, they made just three positional changes. Jim Mooring was elevated from the bench to replace Fitzgibbon, Alex Way came in at the expense of Ron Hines, and Charlie McInnes was included as 19th man.

If the previous week’s Preliminary Final was a battle, the ’45 Grand Final was a war. Promoted by the VFL as the Victory Grand Final, to celebrate the end of six bloody years of conflict, it was later dubbed ‘The Bloodbath’ – and for good reason. Led by renowned hard men on both sides, Carlton and South Melbourne went at each other in a vicious and spiteful affair that eventually went to the Blues by 28 points. The aftermath - amid public outrage, controversy and a welter of suspensions – lasted for years.

McInnes made it on to the field at half time on that sensational afternoon, when he replaced the luckless Lance Collins at half forward. From then on, amid heavy rain, wind, and some of the hardest physical clashes ever seen on a sporting field, the Blues drew away to win by 28 points. Charlie had claimed his second Premiership victory, seven years and a world war after his first.

Although he was tempted by an attractive offer to captain-coach VFA club Brunswick in 1946, McInnes elected to stay on at Princes Park for one more year. By mid-season however, he had played five of his only six matches off the bench, and the writing was large on the wall. Eventually, he retired as a Carlton player in August of that year - five days before his 30th birthday - when Carlton beat St Kilda by 15 points in a round 17 match at Princes Park. He then crossed to Brunswick, and rounded off a memorable football journey with two final seasons at the helm of the VFA Magpies. Later, he coached Minyip in the Wimmera League.

In February 2016, Carlton historian Tony De Bolfo wrote an article called "Past players/and officials reunion planned."
To launch the reunion, Charlie McInnes' daughter Laurie and her son Luke, with his children were guests of the club.
To read Tony's article click here> http://www.carltonfc.com.au/news/2016-02-09/past-playersofficials-reunion-planned

Articles: A Change of Interchange