The Blues go down by 1 point to Essendon at the MCG. 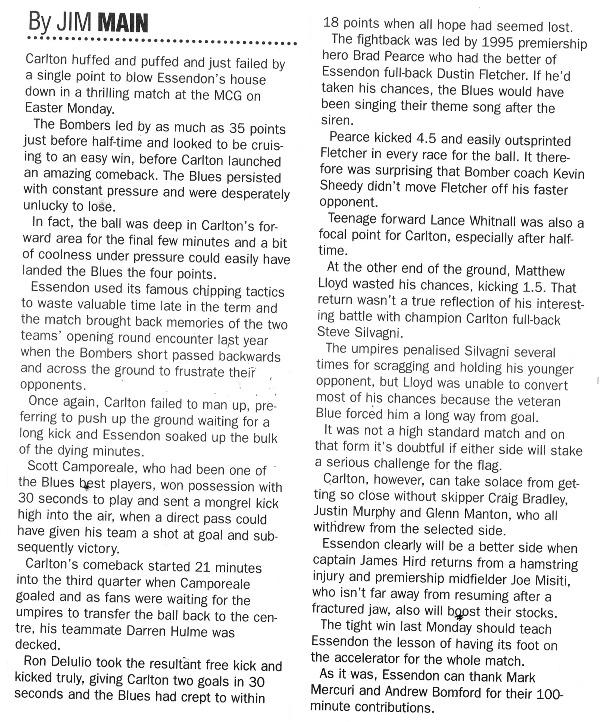 Carlton were dealt a massive blow prior to the start of this Easter Monday clash with the Bombers, when Bradley, Murphy and Manton were all late withdrawals. Scott Camporeale kicked the first 2 goals of the match from clever snaps. But the Bombers then kicked 5 unanswered goals before Carlton kicked the next 3, to get within 2 points. Brad Pearce kicked 2 of these, gathering the ball and running at top pace into goal. A courageous mark from Dean Rice really inspired the Blues. Later on he dived into a pack and emerged worse for wear but the umpires showed him no sympathy until after the game, when he was awarded Carlton's sole Brownlow vote for the game.

Essendon then scored an immediate goal to extend their margin but Carlton hit back with the next 3. Jacob Anstey, in just his 10th game, would be an unlikely hero, involved in setting one up for Matthew Allan and kicking one himself, to reduce the margin to just 4 points at the half way mark of the final quarter. The ball had been almost exclusively in Carlton's forward line. Four behinds had also been added. The ball then went straight down the ground for the Bombers to score a goal and extend the margin to 10 points. Carlton continued to have the ball locked up in its forward line, adding another 3 behinds, from which the Bombers seemed unable to clear the ball from each kick out. Lance Whitnall then broke a tackle, spun around and kicked the ball around a corner to goal, reducing the margin to just one point with 5 minutes remaining. Both sides fought desperately and the rest of the game was ugly, with constant packs and ball ups but neither side were able to add to their score. With 2 minutes left, the Bombers started to kick the ball backwards, playing keepings off until the final siren rang, hanging onto their bare margin. For the Blues, it would be a disappointing result, after having so much of the play in the final quarter but failing to convert. But they would get their revenge around 18 months later, when it counted a lot more (in this match).

Brett Ratten was at the bottom of every pack, collecting 23 possessions. Scott Camporeale also had 23 and kicked 3 important goals. Stephen Silvagni kept Lloyd to just one goal. Up forward, Pearce in probably his best game since 1995, proved too elusive for Fletcher and had 8 shots at goal, 4 of them majors.

Andrew Phillips in action for GWS.jpg