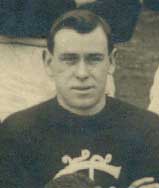 Arthur Charles ‘Shooter’ Ford was another of the swashbuckling band of footballing nomads who played for Carlton in the early years of the twentieth century. Brought to Princes Park in 1903 by secretary/coach Jack Worrall, Ford was a clever defender from VFA side Essendon Town, and he was destined for a successful, controversial and interrupted career with the Blues.

He played his first match for Carlton in the opening round of the 1903 season against Collingwood at Princes Park. The Blues won by 21 points, and Ford made an immediate impact with his vigorous style of play. At his best on the last line of defence, he was equally capable at half-back or as a defensive centreman in his 17 matches that year. Worrall’s disciplined coaching took Carlton to third place after the home and away rounds, before Collingwood had their revenge for earlier defeats by knocking the Blues out of that year’s semi-Final.

Meanwhile, on the other side of the continent, the West Australian gold boom was fuelling a surge in popularity of the Victorian game. Well-paying jobs and ‘expenses’ were available to players willing to make the long trek west, and many promising footballers – including Arthur Ford - took up the opportunities on offer.

In 1905 Ford was on a half-back flank for West Perth when they fought out a draw with East Fremantle in the WAFL Grand Final. In the replay a week later, he was sent forward to add some vigour to the attack and the move paid off. Arthur – by then nicknamed ‘Shooter’- starred at half-forward as West Perth (the Cardinals) won a nail-biter by four points.

After that triumph, Ford embarked on new adventures in one of the toughest competitions in the country – playing for Boulder City in the WA Goldfields League. The hard men of the mines loved their football too, but it was certainly no place for the faint-hearted.

By early 1908, Shooter had decided to return to Melbourne, where Carlton had embarked on their campaign for a third straight flag. He rejoined the Blues for the last six games of the season, and after a string of good performances claimed a place in one back pocket for the Grand Final against Essendon. Carlton went into the match unbackable favourites, but Essendon fought hard all day before going down by only nine points. Ford was among the Blues best, as Lygon St went into raptures celebrating that historic hat-trick of Premierships.

Chasing their fourth flag on the trot, the Blues went mighty close again in 1909. In July, Jack Worrall’s tenure ended amidst a player revolt over his often dictatorial methods. Recognising that the writing was on the wall, he attempted to resign, but this move was rejected by the Carlton committee who asked him to reconsider. Eventually the club agreed to ‘absolve him from the duties of coach’ while he continued as club secretary. Fred ‘Pompey’ Elliott replaced Worrall as captain-coach, and the Blues responded by making it through to the Grand Final against minor premiers South Melbourne.

A swirling wind ruined the Grand Final as a spectacle, but almost 38,000 spectators at the MCG saw a hard, even contest eventually won by just two points by the Bloods. At half-back, Shooter Ford and Billy Payne were among Carlton’s valiant best, in a day of heartbreak for the Navy Blues.

Although VFL football continued as the sporting choice of Melbournians in the first decade of the 20th century, the sports’ administrators had become increasingly alarmed by an increase in on-field violence, and threats made to umpires by players and spectators alike. All clubs were advised that ‘rough play outside the rules’ would no longer be tolerated, and harsh penalties introduced.

On April 1, 1910, Jack Worrall’s stormy and spectacular association with the Carlton Football Club ended with his formal resignation as secretary. Even then, there was one more twist to the tale. When Worrall left, four of Carlton’s stars; ‘Mallee’ Johnson, Fred Jinks, ‘Silver’ Caine and Charlie Hammond went with him. All applied for, and were granted clearances to VFA club North Melbourne. Worrall himself took up a new role as coach of the VFL umpires, and Ford replaced him as Carlton’s secretary – while still continuing his playing career.

By that time, Shooter Ford was one of the biggest names in the game. Although a comparative veteran of 29, he was regarded as one the elite defenders of the VFL and hadn’t missed a game for 12 months. But all that changed however, in round 14 of 1910, following a particularly torrid match against Fitzroy at Princes Park.

After that match, Ford confronted the field umpire and was heard to abuse and physically threaten him. The umpire was thought to have been the same official involved in the report and subsequent heavy suspension of Carlton full-forward George Topping earlier in the season.

Ford himself was promptly reported, and after a tribunal hearing, suspended for 12 months. Carlton appealed against the severity of the penalty to no avail, and Ford was also ruled ineligible to continue his role as club secretary.

Shooter eventually sat out his suspension, and pulled the boots on again when Carlton continued our unbroken run of nine successive finals appearances in 1911. The Blues’ semi-final opponent that day was Essendon – coached by the resurgent Jack Worrall. This match was also the first in which Carlton players wore individual guernsey numbers – in Shooter’s case, number 4. On the day, Essendon finished too strongly for the Blues and ran out winners by 21 points

Ford retired from VFL football after that match - or at least he thought he did - when he took on the role of captain-coach at Murray Valley club Echuca. Following a moderately successful season in the bush, he responded to a plea from new Carlton coach Norm Clark and returned to play for the Blues in the 1912 finals.

Aged 31 and wearing guernsey number 28, Shooter was more than serviceable in his last two games of VFL football, when the Blues knocked over Geelong by five goals in the semi-Final, and again when Carlton lost a high-standard contest against eventual Premiers Essendon in the Preliminary Final. The margin that day was just four points, in a match probably decided by the absence of champion Carlton centreman Rod McGregor.

In 1914 Shooter’s football journey concluded somewhat ironically when he was appointed as the umpire’s coach for the Alpine Football Association at Bright, in Victoria’s high country. By any criteria, it had been a remarkable career.

"That the League has not forgotton how to deal out salutary chastisement to offending players, A. C. Ford, the secretary of Carlton, can fully testify. Umpire James reported Ford for using abusive language after the Carlton-Fitzroy match. Result - Ford disqualified till August next year. Ford is one of the best backs playing, and will be an enormous loss to the team. He also loses his position of secretary during his enforced spell.
A peculiar position is created, Ford beat John Worrall for the position of secretary of the Carlton Club at the explosive annual meeting at the start of the season. The club rules provide that a vacancy among office-bearers is be filled by the the next highest on the poll. Worrall automatically succeeds Ford, but it is very questionable if he will accept the position."
(Referee August 10 1910 p13)

"The Carlton Club applied to the League for permission for A. C. Ford to continue his secretarial duties, notwithstanding that he was recently disqualified for 12 months for using abusive language to the umpire after the Carlton-Fitzroy match.
The Carlton secretary is, under the rules, paid £100 for the season, and Ford's disqualification must interfere to some extent with his livelihood. The punishment was undoubtedly severe, but it is to prominent officials the League must look to for the proper conduct of the game. The blow is a harsh one to the Carlton team from a playing point of view, for, on the season's form, the combination held no better player than Ford, and Carlton is feeling the want of his grand, broad chested hurricane like dashes from the half back line.
The League rule reads, however: 'Any player who has been disqualified shall not be allowed to hold any position whatever in connection with any League club,' and the president (Mr. Alex McCracken) ruled accordingly."
(Referee, August 24 1910 p13)