There couldn’t have been much more of a contrast between the two teams that fought out the 1908 VFL Grand Final. Carlton – winner of 18 of their previous 19 matches under their disciplinarian coach Jack Worrall - named exactly the same side that had thrashed St Kilda in the Second Semi Final. Essendon on the other hand, after conquering Collingwood in the First Semi Final, was forced into four changes by a spate of injuries.

While this immediately made Carlton an even hotter favourite to win their third straight flag, Essendon wasn’t without hope. They had recruited far and wide at the end of 1907 (particularly from VFA clubs) and had picked up an array of established stars. Furthermore, they were the only side to have beaten Carlton during the year.

Unfortunately for the more than 50,000 fans who crammed into the MCG on Grand Final day, a blustery cross-wind made high marking and accurate kicking near impossible, resulting one of the most congested and least exciting finals in the short history of the VFL. At three-quarter time, Carlton was in front by 12 points before Essendon began a desperate last-ditch bid for victory. Their defence dug in to hold the Blues scoreless, and they surged well forward on at least three occasions. But all three of their kicks for goal during the term registered behinds, and the Navy Blues hung on for a glorious, unprecedented and well-deserved third-straight Grand Final victory.

Superior Coaching Wins Blues Third Flag.
Carlton's record before today stood at 18 wins and one loss. But that defeat in round 12 was no prediction of the Grand Final result against Essendon. The mud and wintry rain that prevailed at the East Melbourne Cricket Ground on July 11 had become firm springy MCG turf by a windy Grand Final day. Coach Jack Worrall, in coaching the Dark Navy Blues from 1902, had developed a style and system that had already won Premierships in 1906 and 1907. Captain Fred Elliott's long kicking and marking, combined with the pacy centreline of George Bruce, Rod McGregor and Jim Kennedy, allowed the Blues to dominate the first half of the game. Marking by George Johnson for Carlton and Essendon's Bill Busbridge was a feature. Defending grimly and crowding out play in the much windier second half, Carlton held Essendon out. Final score: Carlton 5.5 (35), Essendon 3.8 (26).

The crowd was a huge 50,261*. What are the secrets of the coach? Worrall stresses the importance of 'harmony' between Committee and players, through the go-between secretary or coach. 'Footballers are like soldiers the wide world over. They require leading and instructing' he says. 'There must be discipline. It is no use telling players what they should not do, unless it can be clearly demonstrated what should be done'. Worrall says that players must know the rules 'intricately,’ be fair-minded and self-disciplined. He stresses bringing a team to a peak fitness for the most important game of the year. - 100 Years of Australian Rules Football.

Blows Exchanged And Women Knocked Down

"A general fight occurred this afternoon at the Essendon-Carlton football match on the Melbourne Cricket Ground. There was an enormous attendance, the grandstand, roofs, and boughs of trees all swarmed with spectators. At one period the crowd became very excited, and a general melee ensued, in which blows were exchanged. Several women were knocked down in the disturbance. It was some time before police could restore order." (Northern Star, Lismore, NSW, 28 September)

The Advocate October 03 (p31) said a crowd of 4,000 had gathered outside the ground around the gates, and at three quarter time they were freely let into the M.C.G. taking the crowd to 53,400.
(*this is now the League's official crowd as at May 2015) 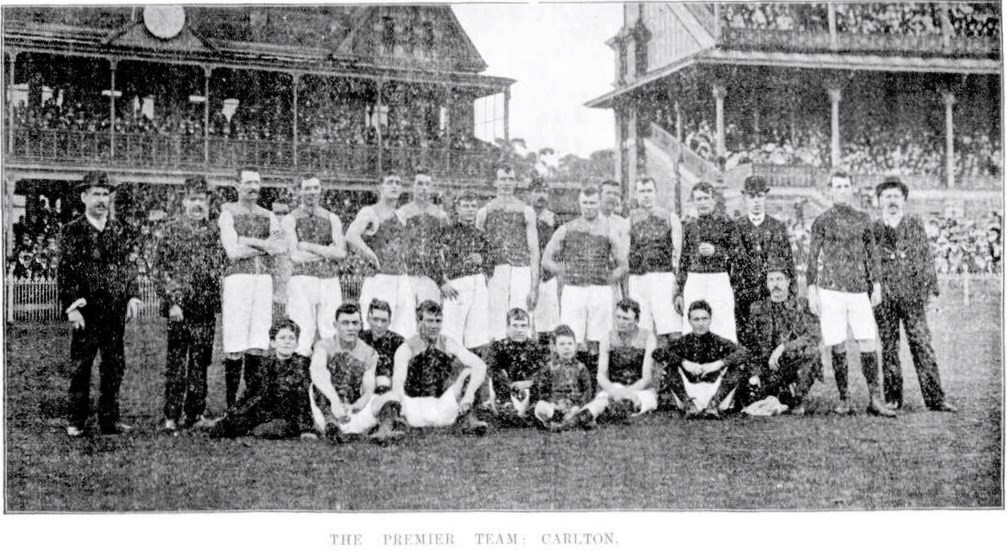 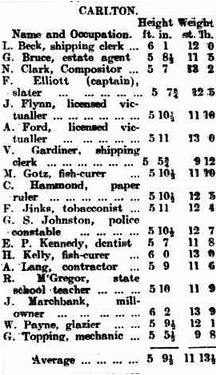 Last game (that wasn't): Jim Flynn, who would retire, but be surprisingly recalled for a game in 1910
Score Records: This is the equal lowest score ever against Carlton in a final