Carlton lost to South Melbourne by 2 points at the MCG.

South Melbourne topped the ladder after the 1909 home and away season, only to be brushed aside by a taller and heavier Carlton combination in the Preliminary Final. Had the Blues finished as the top side, then that victory over the Bloods would have secured Carlton a fourth straight VFL Premiership. But that wasn’t to be, because South exercised their right to challenge the defending premiers to a Grand Final showdown, and set the stage for an epic match. 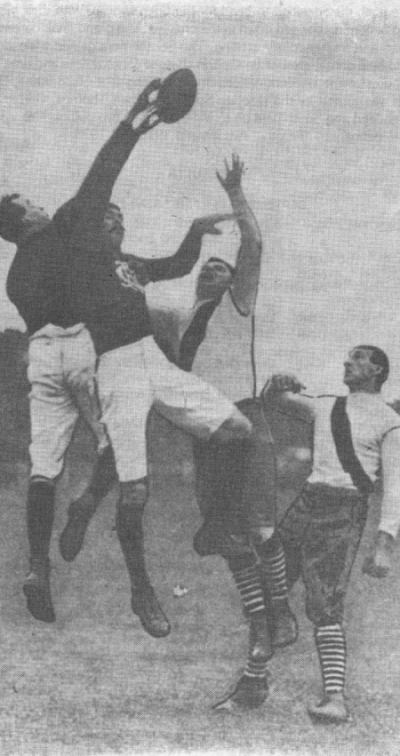 The Southerners went into the flag decider without three key players - rover Jim Caldwell (suspended), full-back Bill Dolphin, and follower Dick Casey (both injured). Carlton benefitted from the return of Norman Clark, but lost Les Beck. Over the preceding week, the Bloods had learnt valuable lessons from the Preliminary Final, and planned to use their pace to advantage this time, rather than trying to match Carlton's strength in the packs. This produced a fast, open contest that certainly impressed The Argus newspaper, which said; “It was a model game in every respect, full of skill, thrill, dash and determination, and played in a spirit that stood out in conspicuous and agreeable contrast to many matches of the season.”

The game opened in frantic style, with South Melbourne playing wide on the flanks and Carlton attacking from goal to goal. Both sides were nervous, and it was reflected on the scoreboard. Neither team kicked a goal in the opening term, despite plenty of opportunities. In one brilliant passage of play, Hammond, Baquie, and Jinks took the ball the length of the ground for Carlton, but the latter’s shot on goal just missed. Topping then dodged a couple of defenders and snapped from the goal-square, only for the ball to brush the post. Both defences were well on top, and the scores were locked at 5 behinds each at the first break. (First Quarter Free Kicks: South 10 Carlton 5)

The second quarter started with Carlton attacking fiercely, although shots by Kelly and Topping both missed. Jim Marchbank and Charlie Hammond were constantly driving their side forward, where future Blue Jack Scobie, Wade and Drane were standing tall for the Bloods. Eventually, Topping found his range, and brought up full points with a clever snap, before Doug Gillespie took a superb mark in Carlton’s goal-square to deny the Bloods an immediate reply. The Blues seemed to be getting on top, before Baquie (who was roving well) twisted an ankle and hobbled to a forward pocket.

That seemed to encourage South, and they launched wave after wave of attacks, led by their follower Bert Franks. He kicked his side’s first goal after a determined passage of play, followed in quick succession by another to his captain-coach Charlie Ricketts. Although Frank Caine had been missing for Carlton until that point, his two fine marks late in the quarter gave heart to the Blues – but both of his long place-kicks at goal drifted wide. Right on half-time, Topping tried his luck from a long way out, and the ball had barely left his boot when the bell rang. With the aid of the breeze, the ball sailed through between the posts to tie the scores again at 2.9 (21) each.

The third quarter was even more intense than the first two, as both sides looked to assert authority on the match. The football rebounded between the respective defences for some time, until Mortimer brought up full points for South. Then Baquie – still hobbling, but still on the ground – won a free kick deep in a pocket, and threaded through Carlton’s third major. Jinks then brilliantly smothered what appeared to be a certain Bloods goal at the other end, triggering another string of missed opportunities for the persistent Southerners.

Late in the term, Carlton’s Martin Gotz tackled an opponent and crashed to ground seemingly out cold. After some time he recovered his senses and played on, but was barely effective for the rest of the game. The Blues seemed to falter when South’s rover Alf Gough ran into an open goal to bring up the Bloods’ fourth major, and at three-quarter time, South Melbourne led by 7 points. Around the MCG, the vast crowd of 37,000 was on the edge of their seats.

The last quarter was an epic battle of the defences, with desperation from both sides the order of the day. Carlton had the better of general play, and scored the only goal for the term through Harvey Kelly. The Southerners however would not be denied and clung to their slender lead under terrific pressure right through to the final bell. The Argus summed it up like this; “Both sides had missed a lot of scoring chances - many of them easy chances - but the merits of the game were unquestionably with South Melbourne, and their victory was an appropriate climax to a remarkable season”.

Best players for Carlton on a memorable day for the game were Rod McGregor, Billy Payne, Fred Jinks, Arthur Ford and Alex Lang.

South have Dream Win
South Melbourne and Carlton were the best teams of the season, and had played three tough games before the Grand Final. South won in round two by 17 points but Carlton reversed the result in round 11 with a brilliant barnstorming quarter. The score at half-time was Carlton 0.11 to South's 4.4 - but the Blues put on nine goals to none in the third quarter in what one scibe called the "most marvellous exhibition of resistless attack ever seen on a Victorian football field". That made Carlton warm favourites for the Preliminary Final which they won by 22 points. But under the present finals system South Melbourne, as the minor premiers, had the right of challenge - resulting in the Grand Final. 'Observer, in the Age, said that if 'instead of knocking opponents about, if South Melbourne players devoted their attention to the ball' they might do better against the Blues. South seemed to heed the advice, 'and in consequence they gave the vast multitude assembled a splendid and exhilarating entertainment, and won the Premiership after having striven unsuccessfully to do so for 19 years. - 100 Years of Australian Rules Football.

1909 Grand Final team at half time

The Carlton GF Team and their occupations
Someone at Carlton must have owned a tea factory.