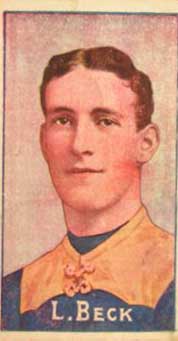 Very few elite footballers have a better career success ratio than Carlton’s dependable, early 20th century defender, Les Beck. His 53 wins in 60 matches for Carlton from 1906 to 1909 gave him a staggering win-loss ratio of 88%, including three successive Premierships.

Born at Maffra in Gippsland in 1886, James Harold Leslie Beck later moved with his family to Melbourne. Les took up the winter game with Carlton Juniors, and in 1906 at the age of 19, he was training at Princes Park under coach Jack Worrall.

His first senior game came in a 45 point demolition of Melbourne at the MCG in Round 8 of 1906. Given the responsibility of partnering Fred ‘Pompey’ Elliott in the ruck, Les did well in his first match, and played four more games before his form tapered off late in the season. He was left out of the Blues’ victorious semi-final team against Collingwood, and seemed destined to miss selection in the Grand Final against Fitzroy as well – until Carlton’s last training session before the flag decider.

Defender Martin Gotz had been brilliant against Collingwood, only to be injured late in the game and ruled out of the Grand Final line-up. Bert Parke was then named in Gotz’s place. But while training on that fateful afternoon, Parke twisted an ankle so badly that he, too, had to be replaced. Coach Worrall turned next to Les Beck, and handed him the biggest challenge of his six-game career – to play in the last line of defence on Grand Final day, and keep a tight rein on Fitzroy’s resting ruckmen.

Contemporary reports of that pivotal game – Carlton’s first, unforgettable VFL Premiership – invariably mention the domination of Carlton’s defence. Billy Payne, Doug Gillespie, Les Beck and Norman Clark all shut down their opponents and the Blues triumphed by 45 points. From that day on, Beck’s days as a follower-forward were over, because it was very obvious that he was instead a instinctive, gifted defender.

Throughout season 1907, while Carlton racked up 13 wins and four losses to finish on top of the ladder, the trio of Clark, Gillespie and Beck evolved into a formidable last line. In their second successive Grand Final together, they helped keep a determined South Melbourne team to just 6.9 (45), while Carlton’s inaccurate 6.14 (50) was just good enough to secure the Blues back to back flags. The boys from Princes Park were on a roll, and Lygon St was jumping - but the best was yet to come.

Just one defeat (by Essendon, on a mid-season bog heap) prevented Carlton from finishing 1908 undefeated. Three wins clear on top of the ladder after the home and away rounds, the Blues thrashed St Kilda by almost ten goals in their Semi-Final. The only drawback to that great win was the injury to Doug Gillespie, which was bad enough to rule him out of the Grand Final against Essendon.

To cover the absence of Gillespie, Beck was shifted across to full-back, and Arthur Ford dropped back from a flank into the pocket. Yet again, all three members of the last line of defence were among the standout performers in a dour, slogging Grand Final that was ruined as a spectacle by a strong wind. Of course this mattered little to the Blues’ players and supporters. Our 9 point win over the Same Olds brought the Blues our third flag in a row – the first time this had ever been achieved by a VFL club.

There is little doubt that the Blues missed a golden opportunity to claim a fourth flag in succession in 1909, when off-field dramas overshadowed our feats on the field. Early in that season a number of senior players openly complained to the club committee about Jack Worrall’s strict methods and often dictatorial attitude. Worrall saw the writing on the wall, and in July, resigned as coach. He did however, stay on as club secretary. Captain Fred ‘Pompey’ Elliott then took over as captain-coach and amazingly, Carlton finished second on the ladder (by percentage) to South Melbourne.

Beck played in all of Carlton’s first 16 matches in ’09, then missed three games through injury, including our decisive Semi-Final win over Essendon. He was back in the side for our Preliminary Final victory over South Melbourne, although his performance didn’t set the world on fire. While they had been beaten by the Blues, South had finished the regular season as minor premiers, so this gave them the right to challenge Carlton to a rematch, in a winner-take-all Grand Final.

One big surprise in the lead-up to that 1909 decider saw Les Beck replaced in the Carlton side by Norman Clark. Another was the tenacity and determination shown by a South Melbourne team that turned the tables on the Blues in a tough and willing Grand Final. The Bloods won the Premiership by two points against almost the same Carlton team that had decisively beaten them by four goals the previous week.

The fallout from that bitter, unexpected defeat lasted months at Princes Park, and culminated in a ‘reform group’ emerging to force an extraordinary ballot for all committee positions. When the reformers swept to power, Jack Worrall resigned his position and walked away from Carlton for good. And seven of the Blues’ best players; ‘Mallee’ Johnson, Fred Jinks, Charlie Hammond, Harvey Kelly, Ted Kennedy, Frank Caine and Les Beck followed Worrall out.

It was a regrettable end to a golden era for the Carlton Football Club, and in hindsight robbed all these fine players of at least one more Premiership. Perhaps The Australasian newspaper summed up the situation best by saying; (this dismissal) ’smacked of both folly and ingratitude.’ After leaving the Blues, Beck played one last season with Port Melbourne in the VFA, then retired from senior football altogether.

Five years after Les’s last match for the Blues, the world was plunged into war when Germany invaded Belgium in August, 1914, and ignored an ultimatum from France and Great Britain to withdraw. Thousands of Australians promptly volunteered for active service, among them 30 year-old Beck.

Because of his age, and the fact that he was a married man, he had to wait over a year to be accepted. He underwent training as machine-gunner, then embarked for France in October, 1916. By June of the following year, was in the thick of the fighting in northern France.

In October 1917, a German bullet found its mark in Les’s left arm, but he refused to leave his post. Only when a lull in the fighting occurred did he seek treatment. He was hit a second time in August 1918 – just weeks before an Armistice was agreed to and the guns fell silent. That second wound was more serious, however he did recover fully and returned to Australia in April 1919.

Reunited with his wife and family, Les settled in Johnstone St, Fitzroy where he lived for many years. A true Digger, and one of the Immortal Eleven Blues who played in all three of Carlton’s first hat-trick of Premierships, he passed away, aged 75, on the 30th of September, 1961.