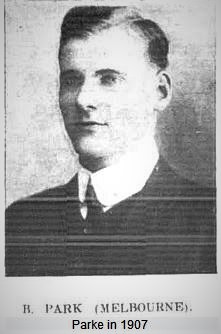 Hubert Norman Parke’s career at Carlton is notable for three reasons. First, while he played only 21 matches, there was a seven-year gap between his 19th and 20th games. Second, he was the first Blue to leave the club, play senior football elsewhere, then return to play again for Carlton. And third, he was named to replace an injured team-mate in the 1906 Grand Final side, but was himself hurt at training and missed out on a Premiership.

Parke who was born in Wandin, was recruited from University High School, and turned out for Carlton for the first time against Essendon in Round one of the 1905 season at Princes Park. Described as sturdy and well-proportioned, he was selected in a back pocket and was not found wanting in the Blues’ eight point win.

Bert held his place in the team right through the home and away rounds of 1905. and his form was good enough to win him a place in the Victorian state team mid-year. He was listed among Carlton’s best players when the Blues thumped favourites Collingwood by 45 points in a Semi-Final upset, and the following week he was at centre half-back when our season ended prematurely with a 27-point Preliminary Final loss to Fitzroy.

Stung by that defeat, Carlton’s vigorous recruiting campaign peaked in 1906 when future stars Martin Gotz, Alex ‘Bongo’ Lang, Les Beck, Fred Jinks and half a dozen others pulled on the Navy Blue for the first time. Naturally, competition for places in the Carlton team went up a notch or two, with the result that Parke was one of those squeezed out.

He didn’t play a senior match in the home and away rounds of 1906, as the Blues improved enough to finish on top of the eight-team ladder. And he wasn’t part of our emphatic ten point victory over Collingwood in the Semi-Final, which set up a rematch with Fitzroy for the Premiership.

However, when Martin Gotz (one of the stars of the Semi-Final) was ruled out of the decider by injury, Parke was named as his replacement. But before that particular fairy tale could come true, Bert was dealt the cruellest of blows when he rolled an ankle in the final training session of the year, and the resulting ligament damage was assessed as too severe for him to play.

In turn, the nod was then given to Les Beck, who was a standout as the Blues demolished Fitzroy by 45 points in the first of our famous hat-trick of Premierships. Thousands of supporters jammed into Princes Park that night, in a ritual that was destined to be repeated many times from that time on. The complete story of that historic occasion is told in the Blueseum feature story; The First of Many.

Understandably, Parke chose to seek opportunities elsewhere after that crushing personal disappointment. He crossed to Melbourne in 1907 to spend six persistant years on their list, yet managed only a meagre return of 30 games.

In 1913, Bert returned to Princes Park. Mirroring the role fate played in his football career, this was the only season since 1903 in which Carlton missed the finals. He wore guernsey number 29 in two more matches for the Blues, and retired at the end of that season. In his nine years at Carlton and Melbourne, he had proved himself a true defender by not bothering the scorers in any one of his 51 games.

While pursuing his football career, Bert had furthered his education by studying at Melbourne University. When he retired from VFL football, he was employed as a Commonwealth public servant, and held the rank of Lieutenant in the Australian Militia (Army Reserve). When Germany invaded Belgium in August 1914, most of Europe and the British Empire became embroiled in World War 1. The bloodiest and most costly conflict in history, it cost the lives of millions – including more than 60,000 Australians.

As a married man, employed in a reserve occupation (one that was necessary to maintain essential services) Bert was unable to transfer from the Militia to the Australian Imperial Forces until July, 1918. He was given the rank of 2nd Lieutenant, and embarked from Sydney aboard a troopship bound for England on November 7. But just four days into the voyage, news came through that Germany and her allies had agreed to an Armistice at 11 am on November 11, 1918. The war was over, and the ship turned to steam back to Sydney. Bert and most of his mates were home for Christmas.