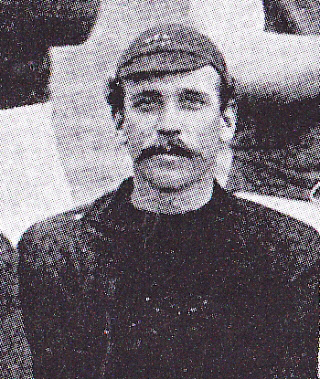 Fred Jinks had a relatively short but spectacular career with the Navy Blues, playing in Grand Final victories in three of his four seasons. He was a tough, versatile footballer and a particular favourite of Carlton’s legendary first coach Jack Worrall.

Like so many members of Worrall’s Premiership teams, Jinks was already a polished, experienced performer by the time he arrived at Princes Park in 1906. Originally from Eaglehawk (near Bendigo) he was playing for Footscray in the VFA when he came under notice by the Blues, who set about convincing the skilful follower/forward to join them.

At Jinks’ first training session under Worrall, the coach apparently asked some of his hard men to test out the newcomer. But Fred was no fresh-faced kid – he was a young veteran of 25, who of not only stood his ground, but dished out some retribution of his own. Worrall was very impressed by Jinks’ pluck, and the two quickly established a strong rapport.

Fred played his first game for Carlton in round 8 of 1906, partnering Fred ‘Pompey’ Elliott in the ruck against Melbourne. By September of that year, Jinks and Elliott had developed into a daunting combination. Together they drove the Blues to the top of the ladder, and – in Jinks’ 12th game – to our first, fabulous, famous 1906 Premiership victory over Fitzroy.

Carlton’s second flag in 1907 was only won after a titanic Grand Final battle against South Melbourne. Missing ‘Pompey’ Elliott through suspension, and champion centreman Rod McGregor to injury, coach Worrall sent Jinks to a half-forward flank and named journeyman Alby Ingleman to replace McGregor. The moves clicked and both men were among Carlton’s best in a gutsy, hard-fought victory by 5 points.

In 1908 Jinks was honoured with the vice-captaincy of the Carlton team, while he and Elliott were reunited in a dominant Blues’ ruck division that also boasted stars of the calibre of 'Mallee' Johnson, Jim Marchbank and Charlie Hammond. Only Essendon beat Carlton during the regular season (on a mud heap at the East Melbourne ground) so it was no surprise that the Same Olds were at long odds against the Blues on Grand Final day. Jack Worrall squeezed all of his gun followers into the Grand Final side, naming Jinks on a half-back flank, and Marchbank at centre half-forward.

To their credit, Essendon proved to be more than a handful for Carlton in a dour, unattractive decider that was robbed of highlights by a strong, swirling cross wind. The Blues kicked only 5.5 (35), but the Same Olds still went down by 9 points after managing just 3.8 (26). All this mattered little to the Carlton players and their thousands of supporters on Grand Final night, when they deliriously celebrated the first ever hat-trick of VFL flags. Jinks’ (and Carlton’s) quest for a fourth Premiership in 1909 was hampered before the season began when Fred was laid low by illness. He was unable to play until the round 11 clash with South Melbourne. Meanwhile, persistent rumblings of discontent over strict training methods came to a head in July, when Jack Worrall tendered his resignation as coach. Worrall stayed on at the club as secretary, but took no further part on the match days. ‘Pompey’ Elliott assumed the dual role of captain-coach, with Jinks continuing as his vice-captain.

Despite these ructions, Carlton went within two points of claiming the 1909 Premiership as well. Finishing second on the ladder to South Melbourne (by percentage), the Blues knocked over Essendon in a Semi-Final, then South in the Preliminary Final. Had Carlton finished the year as minor premiers, that victory over South would have won us our fourth Premiership on the trot – however, because The Bloods finished top of the ladder, they had the right to challenge Carlton to a Grand Final rematch.

So it was that in another fierce, low-scoring thriller, South turned the tables by two points. This time, Jinks started in a forward pocket, alternating on the ball with Johnson and Hammond. And for the fourth time running, Fred was named among the Blues’ best players in what turned out to be his last game for Carlton.

Prior to the 1910 season, further political upheaval saw a reform group take control of the Carlton committee, and Jack Worrall leave the club altogether when he resigned as secretary. Amid widespread recrimination, seven players – including Jinks – also walked out to join other clubs.

Jinks went to North Melbourne in the VFA, and won another flag when the Shinboners beat Brunswick for the 1910 pennant. He captain-coached North in 1912, then crossed to Port Melbourne*, where his playing career ended when he was suspended for an entire season after being found guilty of ‘charging an opponent with his fists.’

One of the eleven Carlton players who appeared in each of the club’s first three Premiership teams, Fred Jinks passed away on February 8, 1940.

The Bendigo Advertiser June 27 1906, said;
"Fred Jinks of the California Gully Club, but who is better known as an Eaglehawk footballer, has received tempting offers from the Carlton Club."

1907 - An Eaglehawk Trouble - Jinks Withdraws From The Team

Fred Jinks had been playing with Eaglehawk against South Bendigo in a mid week match. He did not perform to his usual standard as he was carrying an injury from an earlier Carlton game. After the match when Fred was accused of "playing dead," he immediatley resigned from Eaglehawk.
To read the Bendigo Advertiser report click here> http://nla.gov.au/nla.news-article89727584

"Recognised as a fine footballer in his day, Mr. Frederick Jinks died in Melbourne yesterday. Mr. Jinks lived at California Gully, Bendigo, and played football with Eaglehawk when that team was at the peak of it's fame. For some time he played football with Eaglehawk on a Wednesday and Carlton on a Saturday. He later transferred to a Melbourne club and became one of the best followers in Victoria. He was also a member of the Eaglehawk fire brigade when it was the champion brigade of the State. Two of Mr. Jinks' sons play cricket with the Carlton club."
(The Argus 10 February 1940 p44)