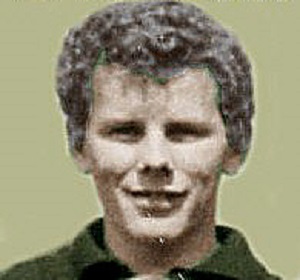 Born in Australia of Latvian parents, Andrew Lukimitis was a handy right-footed utility who played his first senior game for Carlton in 1970. During the following season he changed his surname to Lukas by deed poll - apparently to make life easier for radio and television callers like “Captain Blood,” Jack Dyer. In 1972, Lukas’ career peaked when he came off the reserves bench and played the entire second half of Carlton’s record-breaking Grand Final victory over Richmond. Later, after only two more appearances for the Blues, he was cleared to Fitzroy, where he finished his VFL career.

Another graduate of that notable football nursery St Mark’s in Fawkner, Lukimitis joined Carlton’s Under-19 squad in 1967 and enjoyed an encouraging first year – finishing runner-up in voting for the Best and Fairest, and playing a handful of games for the Reserves. At first a winger or half-forward, he was easily distinguished by his mop of curly hair in guernsey number 49. Eventually, he was called into the senior team as 20th man against South Melbourne at the Lake Oval in round 7, 1970, when he sat on the bench right through until late in the last quarter as Carlton was demolished by 77 points. On the following Saturday afternoon at Waverley, it was a similar story. Carlton met Collingwood in the Blues’ first outing at the VFL’s brand-new showpiece stadium and were well-beaten, with Lukimitis given only a brief few minutes of game-time when the result had already been decided. From then on, while his team recovered and surged to the 1970 Premiership, Andy remained with the seconds and hoped for another chance.

When the Blues began their title defence in 1971, Lukimitis warmed the pine again three more times before he was selected on a wing in the starting side against Geelong at Kardinia Park in late April. Carlton won an exciting contest by 13 points, with Andy picking up 14 disposals and five marks. By round 8, he hadn’t missed a senior game, but when the match committee sent him back to the seconds again for a breather, an emerging batch of new faces including Trevor Keogh, Brian Walsh, Bill Barrot and Peter Hall kept him out of the senior side for the rest of the year. Undeterred, Andy contacted the registry office to change his surname to Lukas, then buckled down to 1972 pre-season training.

His diligence paid off too, when he was recalled as 20th man for Carlton’s win over South Melbourne in round 3, 1972. By then he had inherited the number 7 guernsey of retired Premiership star Ted Hopkins, but it was his switch to half-back in round 6 against Geelong that consolidated his place in the senior side. When Carlton met South Melbourne again at Princes Park in round 16 - and Andy drifted forward to nail his first career goal - he had played 14 games straight, either as a flanker or stand-in back pocket.

Carlton completed the 1972 home and away rounds as the minor premier, but then had to endure a gruelling final series before reaching the Grand Final against hot favourites Richmond. After bit parts in all three of the Blues lead-up finals, Lukas was included in the Grand Final team as a reserve, alongside veteran winger Garry Crane. In a dominant first half in the flag decider, Carlton swept the Tigers aside, kicking an extraordinary 18.6 to set up a 45-point advantage approaching the long break. It was then that defender Vin Waite badly twisted an ankle, and Lukas was called on to replace him. The Blues went right on with the job in the third quarter, adding another seven goals before easing off and cruising to victory by 27 points. Lukas finished the match with four possessions, a huge grin on his face and great expectations for the future.

However, later in the year, after the euphoria had subsided, Andy was told that his prospects at Princes Park were not as bright as he might have hoped. Fitzroy had shown interest in recruiting him, and Carlton would not stand in his way if he agreed to a switch of clubs. He stayed with the Blues for two more games, including his last senior appearance in round 10, 1973 at Waverley, when Carlton beat Footscray by 26 points, then bowed to the inevitable and headed to the Junction Oval.

In 1975, after 30 matches in two seasons with the Lions, Lukas moved on to Dandenong in the VFA, where he rounded off his career with another 40-plus games over two seasons.

As well as guernsey numbers 49 and 7, Lukas also briefly wore no. 52 in 1967, when he first played with Carlton Reserves.

Lukas was one of two Carlton players to change their names in 1971, the other being Gary Lawson-Smith who changed his name from Smith. This story is explored in detail here.

In 2004, Lukas' role in the 1972 Premiership was recognised when he was made a Life Member of the Carlton Football Club.

1996 Qual. Final Vs WCE - Anthony Koutoufides: Player of the week.