A blonde-haired speedster from the west... 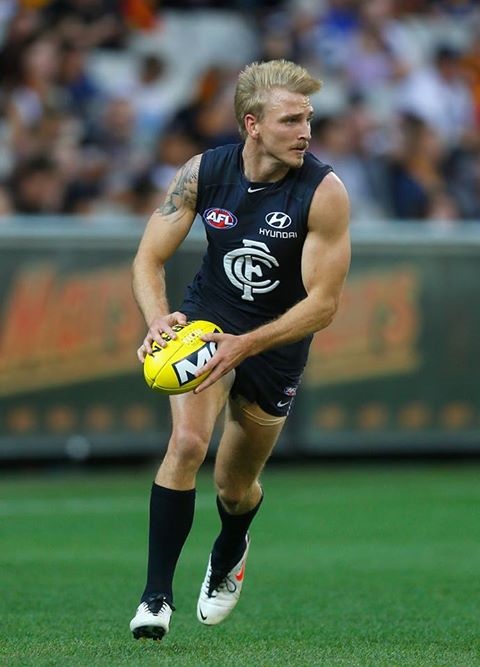 Born in Canberra and raised in Western Australia, Dennis Armfield grew up playing Rugby Union. By his late teens however, he had switched codes to Australian Rules and it wasn’t long before the pacy, fair-haired youngster was a star for junior clubs Eastern Hills and Kalamunda. In 2002 he was recruited by WAFL heavyweights Swan Districts and, over the following five seasons, progressed through the ranks to be the Swans’ 2006 Rookie of the Year, as well as Best on Ground in the WAFL Reserves Grand Final.

In 2007, Dennis was promoted to the Swans’ seniors. He played all 20 matches for the year, before being drafted by the Carlton Football Club at selection 46 in the 2007 AFL National Draft. It was a pivotal moment in time for the Navy Blues, in so far as Armfield’s arrival at Princes Park coincided with the recruitment of West Coast champion Chris Judd and launched the rebirth of the Blues after five of the worst seasons in the clubs’ history.

Armfield put in a solid 2008 preparation, and a string of standout games with the Northern Bullants earned him a call-up for his senior debut when Carlton took on the reigning premiers Geelong on a Saturday night at Docklands in round 10. Wearing guernsey number 27 (previously worn by the likes of Chris Bryan, Darren Hulme and Luke O'Sullivan) Dennis came off the bench to collect 23 possessions in an eye-catching defensive midfield role, even though the Blues were well-beaten.

The following week, he celebrated his first career goal when Carlton edged out Port Adelaide at home, and by round 13 he had played four games straight before he broke a finger against Essendon. Although that injury cost him four matches, he came back for the last month of the season and finished his debut year with nine games and three goals to his credit. By then his pace, acceleration, tenacity and hard tackling were becoming increasingly important to his team.

In 2009, Armfield followed up with an equally strong second year that saw him used almost exclusively in defence. Encouraged to run and carry, he lifted his disposal average to almost 14 per game in his 17 matches, during which the Blues climbed back into the top eight and qualified for our first final in eight long years. At the Gabba in Brisbane in the first week of the play-offs, Dennis was busy and committed in a back pocket as Carlton led Brisbane by 24 points at three-quarter time, only to wilt under pressure late in the last term, and lose by 7 points.

In 2010 Armfield emerged from his intensive pre-season program fitter, stronger and with improved endurance. All of those qualities came to the fore when he held Geelong’s Shannon Byrnes under a tight wrap in Carlton’s great win over Geelong in round 5. From then on, he was firmly entrenched in the Blues’ best 22 for the rest of the year, which culminated in another heart-breaking Elimination Final loss – this time to Sydney – by a measly 5 points.

Throughout 2011, Carlton’s coaching panel began releasing Dennis into the midfield, where he filled various roles with tenacity and purpose. He played his 50th match in a nail-biting 2-point loss to Geelong in round 9, and achieved another personal best when he kicked three goals in the Blues’ demolition of Essendon in a Saturday night blockbuster at the MCG in round 18. Rounding off his fourth season, he was a good contributor in both of Carlton’s finals matches – a huge Elimination Final win over Essendon, followed by a valiant 3-point Semi Final loss to West Coast.

After celebrating his 25th birthday three days prior to Christmas, Armfield knuckled down to pre-season training, and in the early stages of 2012, his form mirrored that of his team. The Blues began the season with slashing wins over Richmond, Brisbane and Collingwood, but Dennis hurt a knee against the Magpies and was side-lined when Carlton suffered an horrendous loss to Essendon in round 4. From then on, a cruel list of injuries derailed the Blues season, eventually bringing about the departure of coach Brett Ratten after Carlton failed to make the finals.

Meanwhile, Armfield made a quick recovery and came straight back into the side for Carlton’s round 5 trip to Subiaco to take on the Dockers. In that match and thereafter, he became the Blues’ midfield Mr Fixit – playing offensive and defensive roles as required, and using his pace to advantage both ways. After a heart to heart discussion with Ratten mid-year, his second half of the season was outstanding, and he was a worthy winner of two prestigious honours at the club’s 2012 presentation night; Best Clubman, and the Spirit of Carlton Award.

In 2013, as some Carlton players took time to adjust to the rigorous discipline of their new coach Mick Malthouse, Armfield settled into the role of a defensive forward and was one of only five Blues to play all 24 games, including both finals. On a Saturday night at Docklands Stadium in round 20, Dennis brought up his 100th game, on the same night that Bryce Gibbs made it to 150. 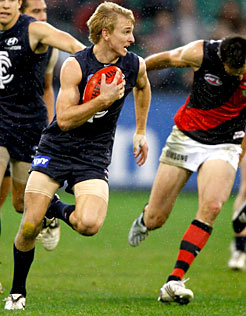 Heading into 2014 on a wave of expectation, the Blues stumbled at the first hurdle, and lost the first four games straight. After that, the team never recovered, winding up 13th on the ladder at season’s end. Armfield’s year was a similar story. He struggled to influence games the way he had in 2013, and didn’t play a senior match until round 8. He was then in and out of the side for the rest of the year - three times as a late inclusion, and three times wearing the yellow vest of the Blues’ substitute.

As the 2015 season began, it seemed that Dennis was on shaky ground with his coach when he wasn’t selected in Carlton’s first two matches. He was eventually recalled for round three against Essendon, and racked up 27 possessions as Carlton’s season from hell began to unfold. Over the next three months, the Blues won only three times, and slid inexorably toward another wooden spoon. In June, after a public spat with the club, Malthouse was sacked and replaced by his senior assistant John Barker as caretaker coach. Armfield seemed to play with increased confidence under Barker, only to suffer a broken arm against Richmond in round 15, bringing a premature end to his ninth season in navy blue.

Season 2016 brought yet another eventful season for Dennis and for Carlton, when former Hawthorn assistant Brendon Bolton was appointed as the new senior coach of the Blues. He and Armfield seemed to strike up a quick rapport, although a pre-season hamstring strain kept “Army” out of the senior team until round 6. When he did return, he was influential in five wins from six games, only to suffer the agony of a split testicle in the round 12 loss to St Kilda. He recovered to kick four goals in a slashing first half against Adelaide in round 16, before the Blues fell away to finish 14th on the ladder.

Retained for 2017, Armfield played a leadership role for the Bullants and a further 5 games in the seniors, before finishing up in the last round of the year. He was relied upon to provide leadership by example again in 2017, increased when he took on extra responsibility as an assistant coach of the Blues’ AFL Women’s Team. All up, Armfield finished with 145 games in Navy Blue and finishes as a proud Bluebagger in a difficult time.

Armfield will stay involved with Carlton's AFLW team for the 2018 season, he was also appointed as the Melbourne Roys ambassador for the Bowls Premier League (BPL). In addition to this, Armfield will be taking on a playing assistant role at Avondale Heights in the Essendon FL for the upcoming 2018 season.

AFLW: Armfield joins North
Former Carlton player Dennis Armfield has joined the AFLW Coaching team as AFLW/VFLW Senior assistant coach for the 2019 season. It’s all hands-on deck at Arden St, in preparation for the North Melbourne Tasmanian Kangaroos' inaugural season. Armfield's role will support AFLW Coach Scott Gowans and strengthens the club’s off-field setup, with the club being the only AFLW side to have appointed a full-time coach, high-performance manager and operations manager. No stranger to the football landscape with 145 AFL games to his name with the Blues, Armfield is currently involved with the Melbourne University Women’s Football Club (MUWFC). “Dennis brings a wealth of football experience from Carlton in both the men's and women's programs. He was involved with the AFLW side in his final year before retirement,” North football operations manager Laura Kane said. “His outstanding community work aligns with our values as a club, so we're excited to have him on board. He'll be a terrific addition to our club.” The Club also appointed Alex Veitch as AFLW/VFLW High Performance Manager (HPM). Veitch’s football experience dates back to the TAC Cup Youth Girls program with Dandenong Stingrays in 2014. “Alex will bring some terrific knowledge from his time at Carlton, and his experience in the high-performance industry,” Kane added. “It’s really important we have a well-resourced team to support our expectations and demands." - Karla Zanardo.

2019 - Dennis Armfield took up the role as playing coach for Park Orchards in Division 1 of the Eastern Football League.

At the 2015 Brownlow Medal count, Dennis was presented with the Jim Stynes Community Leadership Award for his ongoing work as an ambassador for Odyssey House Drug and Rehabilitation Centre. He was also a regular contributor to the Carlton Football Club’s community programs at the Royal Children’s Hospital, and Parkville Juvenile Justice Centre. The award included $20,000 from the AFL, to be donated to the charity and/or community programs of his choice.