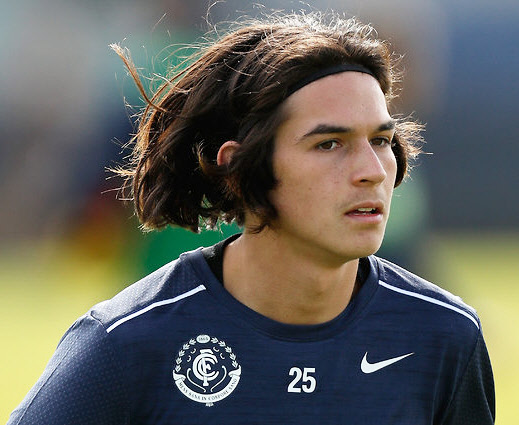 
Carlton’s second selection (no.27) in the 2016 National Draft was 18 year-old West Australian Zac Fisher. A small-framed, but quick and clever midfielder, he had been a star for the Sandgropers in the 2016 Under-18 National Championships, and had already played 10 senior matches for the Perth Demons before joining the Blues.

At the Under-18 championships, Fisher averaged 21 disposals, three marks and five tackles over his four games, but it was his creativity around the stoppages and clean hands that won him his state’s Most Valuable Player Award as well as selection in the All Australian team. Meanwhile, Zac was also making the pundits sit up and take notice of his debut season of senior football in the WAFL. In 10 games for Perth, the confident young left-footer averaged 11 kicks, 7 handpasses and 3 tackles per match, as well as kicking six handy goals.

One unabashed fan of Fisher’s ability was WA Talent Manager Adam Jones, who, prior to the National Draft, had this to say about the future wearer of Carlton’s number 25 guernsey. "He's a terrific kid. He's high energy, really enthusiastic and a really good person to have in your team. He brings guys together. He's an exceptionally smart player and really sharp around the stoppages. He's a natural reader of the play, clean with his hands and quite skilful. He's played a lot of league footy this year and did really well for a kid his size. As he steps up he'll have to put on some size and improve his fitness, but he's had a terrific year and he's only going to get better."

Fisher's impact was immediate - sure hands, nice left and a phenomenal work ethic. Beginning with 17 games in his debut year, Fisher showed tenacity up forward. As our disastrous 2018 kicked off and with injuries taking place left right & Centre, Fish was asked to spend more time in the midfield alongside debutants Dow and O'Brien. Another 17 games, a massive pick up in disposals to 19 per game, and 8 goals, saw Fish a fan favourite well before his time. Unfortunately a broken leg against the Hawks ended his season, but big things await the young man.

Zac Fisher's original junior club was the York Roos, which is 97 km east of Perth.